Fanta Gammon In The Slow Cooker With Honey. If you have not tried fanta gammon in slow cooker, then this is your chance. Delicious orange flavoured gammon with honey that is the perfect quick dump and start slow cooker gammon recipe.

Fanta Gammon In The Slow Cooker

I know you are probably wondering what on earth the big deal is with fanta gammon in the slow cooker.

Well that was me until I tried fanta gammon for the first time. But long before getting hooked over fanta gammon I fell in love with slow cooker gammon in coke.

Over the years (especially since starting Recipe This) I have made some amazing friends.

Online friends that have a shared love for kitchen gadgets like me and that feel more like family than friends.

It is so much fun sharing our stories from different parts of the world. I have made friends with amazing people from the United States, Canada, Australia, UK, Ireland, South Africa, Asia and many parts of Europe.

One of those friends I have made lives in London and works will sick children by day and has her own homebased nail salon by night.

She has the most amazing long pretty nails that I have ever seen and loves kitchen gadgets as much as me.

She was the wonderful lady that got me obsessed with adding coke to gammon, yet now I am emailing her and getting excited over slow cooker gammon fanta instead.

Lots of gammon later and getting this gammon fanta spot on and I am ready to share it with you today.

I just wish I could get the large gammon all year around, but sadly here in Portugal it is just a Christmas thing!

I am sure first you want to know why people are cooking gammon with fanta in the slow cooker and what’s so good about it?

Its one of those AMAZING and LIFECHANGING slow cooker recipes.

The fanta, like with when you use coke, works at stopping the gammon from being so salty once cooked and gives it a fantastic flavour.

Its like the best orange flavoured gammon you have ever tried.

Ingredients are thrown in and the last ingredient to be added is your fanta that as it slow cooks flavours your gammon to perfection.

Once tried and once you see how easy gammon fanta is, there will be no going back.

If you follow Slimming World, Weight Watchers or other similar diets, you’re probably wondering if gammon cooked in diet fanta is possible and how easy it is to make it Slimming World Friendly?

Well it’s a case of looking through the ingredients and seeing which ones are not syn free on Slimming World and I am left with:

Our recipe for gammon fanta in the slow cooker is for gammon that you can slice and serve as part of a gammon roast dinner.

But if you wanted to create pulled fanta gammon it is a case of cooking it for longer and leaving about 20% of the visible fat on the gammon.

This is because the fat helps turn it into pulled gammon and the longer the gammon cooks in the fanta juices the more tender it becomes and how easy it is to turn into pulled fanta gammon.

In a regular recipe for a large fanta gammon you would be cooking the gammon for 5 hours in the slow cooker. Cook it for 7 hours instead and it will become pulled fanta gammon.

How To Make Fanta Gammon?

To make fanta gammon in the slow cooker is so EASY:

Gammon In Slow Cooker With Honey

This here is my favourite brand of honey and is made in Greece. It is the best of the best when it comes to honey and we have used it in many of our recipes on Recipe This.

I like to add a layer of honey around the top and sides of the gammon joint and then cover the top with orange slices.

The orange slices are secured with cocktail sticks and as you can see below stay in place even after the gammon has finished cooking and the gammon has shrunk:

Do You Put Water In The Slow Cooker With Gammon?

The two questions I get asked the most among my slow cooker beginner readers is either:

Well the answer is ZERO. Whenever you cook meat in the slow cooker you don’t need to add any water, especially when cooking ham, gammon, chicken or pork.

That is because when you cook meat in the slow cooker it cooks in a similar way to baked and reduces the amazing flavour if water was to be added.

The only exception is when making a beef stew or other similar stews or casseroles in the slow cooker.

Plus, when you cook meats like pork, such as making our slow cooker Asian pulled pork, there is fat on the meat that will create its own liquid without you adding in your own.

The cooking time for your slow cooker fanta gammon will vary depending on the size of your gammon.

Can You Make Gravy From Gammon Juices?

Yes you can and the way I have created this gammon recipe lends itself to making your own gravy.

You see if you want a healthy gravy from your leftovers the carrots along with the juices make the perfect combo.

Forget unhealthy gravy granules and instead mix the juices with the cooked carrots. Carrots are a natural thickener and will make your gravy creamy with the best flavour.

Or for your PLAN B, mix in the rind from an orange and you can have an orange sauce for your gammon.

What Should I Serve With Gammon?

You can serve whatever you like with your gammon.

What we did was two different meals. On one day we had sliced gammon with sweet potato cubes and on another day, we had gammon, sweet potato and poached eggs.

It is all about personal choice and how you like your gammon.

Though if I was to choose one favourite side it would be our air fryer roast potatoes. 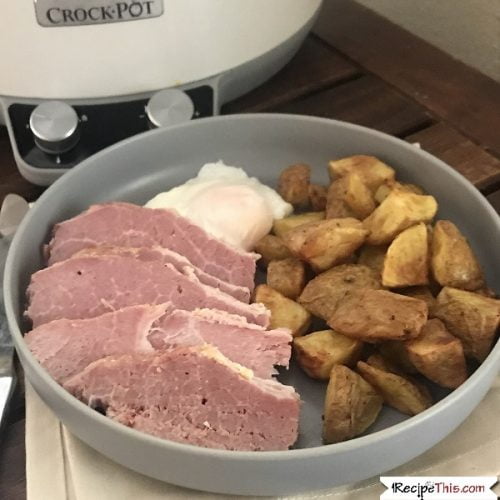 Our gammon weighed 2.5kg. If you are using a smaller gammon, see our cooking times above. If on Slimming World swap the fanta for diet fanta. It will still taste just as good. For a bigger depth of flavour, score the gammon prior to adding the honey and orange. Because it is a long cook time on low, this slow cooker recipe is perfect for leaving on the go while at work. If your gammon is smaller and if you have a smaller slow cooker, you wont need as much fanta as me.

Calories: 897kcal | Carbohydrates: 35g | Protein: 68g | Fat: 52g | Saturated Fat: 19g | Cholesterol: 194mg | Sodium: 374mg | Potassium: 992mg | Fiber: 1g | Sugar: 33g | Vitamin A: 258IU | Vitamin C: 11mg | Calcium: 42mg | Iron: 3mg
Nutrition InfoPlease Note: Nutrition values are our best estimate based on the software we use at Recipe This and are meant as a guide. If you rely on them for your diet, use your preferred nutrition calculator.
Are We Friends On Pinterest?If we are not and you use Pinterest then follow us @RecipeThisBlog for more delicious recipes.
Fancy A Video?Subscribe to the Recipe This YouTube Channel for full length recipe videos. Don’t forget to click the bell icon to be notified when we upload a new video. Subscribe Here!
Copyright Notice© RecipeThis.com. ALL content including photos are copyright protected. Sharing of our recipes is both encouraged and appreciated via the social share buttons. Copying and/or pasting full recipes to any social media channel or onto your own website is strictly prohibited.

1 thought on “Fanta Gammon In Slow Cooker With Honey”