How to cook slow cooker gammon in coke. Load your gammon joint into the slow cooker with diet coke and brown sugar for the ultimate roast gammon.

This is one of the easiest ways to cook gammon in the slow cooker and you will love the flavour and how tender the gammon is once cooked.

Updated after originally sharing with you how to cook gammon in coke back in 2019. We have added new photos and even better recipe ideas included in this updated version.

Back in 2019 one of the readers at Recipe This said that I must try gammon in coke. She told me it was perfect for stripping the overly salty taste from the gammon and gave the gammon the best flavour ever.

Plus, it made the gammon so tender, and it was a great cheats way for cooking gammon.

I decided to give it a go, and she was spot on….  Gammon in coke is amazing and further research led me to slow cooker fanta gammon and slow cooker gammon in cider.

Just by using drinks in a gammon recipe makes it taste even better and is also brilliant for if you want to just dump ingredients into the slow cooker.

At Recipe This we love getting some cheap gammon from the supermarket (usually from Asda) and then throwing it into the slow cooker for a quick dinner.

We could only get the tiny gammon joints when we lived in Portugal unless it was Christmas so now buying them is like an addiction.

Here are a few other great alternatives for gammon if coke is not your thing or you want a Plan B:

You can also get all our gammon recipes here.

Why Do You Put Coke With Gammon?

If you are wondering why gammon in slow cooker using coke is a thing and why it is a good thing. Let me fill you in.

The coke is used as an alternative stock for the gammon. When you cook the gammon in the slow cooker you simply pour over the coke and then cook it in a similar way that you would normally cook slow cooker gammon.

There is nothing hard or complicated about gammon in the slow cooker using coke.
What you will be surprised about is the end result. The flavour of the gammon is wonderfully sweet.

A bit like when you make gammon with a honey in the slits, but with coke gammon there is less effort involved. No slits are required into the slow cooker gammon and it’s what I would call a dump and start slow cooker recipe.

The method of gammon with coke is successful because when cooked the mix of coke with brown sugar creates a sugary syrup that is perfect for marinating gammon.

Dump the ingredients into the slow cooker and then at the end come back and add your glaze to your gammon. Finish the cooking process in the oven or air fryer and you’re done.

You could have your slow cooker gammon in coke during festive times such as Christmas or Easter or New Years Eve. Or just for when you want a quick family dinner.

I like it the best as a cheaper option for Christmas Dinner. Perfect for if you are watching the pennies and you want a cheaper alternative to roast turkey.

Do You Leave Plastic On Gammon In Slow Cooker?

No, you need to remove the plastic from the gammon before cooking. Also if you are on Slimming World or Weight Watchers you will also want to trim off any visible fat before slow cooking too.

What’s The Difference Between Gammon & Ham?

The easiest way to describe the difference between gammon and ham is to say that gammon is the uncooked version of ham.

In the US I note that its nearly always cooked ham that is sold and you are reheating the ham. Whilst in the UK we have gammon and we can cook it in slow cookers, air fryers etc and its delicious, though very salty if not cooked correctly.

Also, in the US you will probably call this recipe slow cooker ham in coke, whilst us Brits would call it slow cooker gammon coke.

Can You Use Pepsi Instead Of Coke For Ham?

Yes, you can use Pepsi instead of coke for ham. Pepsi Max gammon is my favourite and you can also make ham with other brands such as Dr Pepper ham, cherry coke ham and so on.

Gammon in coke is a bit like the sweet taste you have on ribs or on pulled pork. You are simply cooking gammon in slow cooker with sugar. This then gives the slow cooker gammon in cola a rich sweet taste, but without being over sweet.

Gammon – The most important ingredient is the gammon. Note, I mentioned above that gammon shrinks when cooked in the slow cooker so if you can go with a 2kg gammon. As I had an online delivery mine was 2.3kg.

Coke – We used a 2 litre bottle of diet coke. You can swap this for pepsi, or dr pepper if you prefer. You can also go full sugar or with the diet alternative.

Sugar – We also added in some brown sugar. This helps create the sweet taste to the gammon along with the coke.

Extras – I also recommend adding in some garlic and onion. This flavours the slow cooker pot and you can always save the leftovers from the pot if you want to make a gammon gravy.

Then for the kitchen gadgets that we have used in this gammon cooked in coke recipe it has just been our Crockpot. We have this one and its wonderful for many types of slow cooker recipes and also great for easy Sunday lunches.

How To Cook Gammon In Coke?

And I am sure you can see why this recipe for gammon in coca cola is a true favourite of mine.

What To Have With Gammon?

My favourite way to enjoy diet coke gammon is with some of our air fryer part baked bread rolls and make delicious sandwiches.

But gammon is also fantastic for the meat of your Sunday roast. Serve your gammon with our Ninja Foodi Veggie Bake, air fryer frozen roast potatoes, air fryer frozen Yorkshire puddings because they go with everything and let’s not forget air fryer sage and onion stuffing balls and air fryer pigs in blankets.

Your gammon with coke recipe is below, note you can print it out with or without photos, adjust servings, or click between metric and imperial depending on where you are in the world. 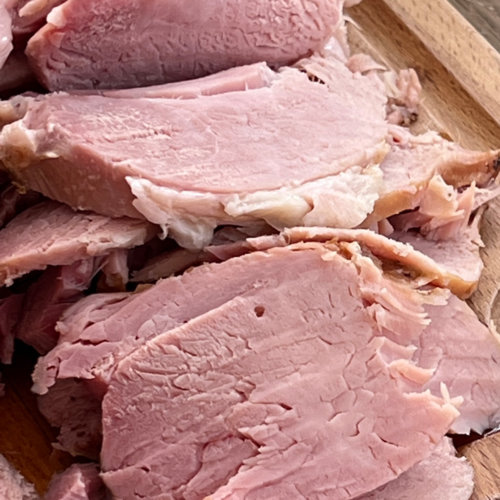 Garlic. One of my favourite kitchen hacks is frozen chopped garlic. I buy it from the supermarket and then just grab a little as I need it. Salt. Gammon, like virginia ham is very high salt. By being submerged in cola it gets the salt out of the gammon and that is also why you don’t need to add extra salt to the recipe. Thanks for reading our slow cooked gammon in coke recipe on Recipe This. We have many more slow cooker recipes for you to check out next. Though if you would like more slow cooker roasts, do check out our slow cooker silverside recipe next.

Serving: 250g | Calories: 883kcal | Carbohydrates: 49g | Protein: 127g | Fat: 17g | Saturated Fat: 5g | Polyunsaturated Fat: 4g | Monounsaturated Fat: 7g | Trans Fat: 0.1g | Cholesterol: 357mg | Sodium: 471mg | Potassium: 2214mg | Fiber: 1g | Sugar: 45g | Vitamin A: 41IU | Vitamin C: 3mg | Calcium: 134mg | Iron: 4mg
Nutrition InfoPlease Note: Nutrition values are our best estimate based on the software we use at Recipe This and are meant as a guide. If you rely on them for your diet, use your preferred nutrition calculator.
Are We Friends On Pinterest?If we are not and you use Pinterest then follow us @RecipeThisBlog for more delicious recipes.
Fancy A Video?Subscribe to the Recipe This YouTube Channel for full length recipe videos. Don’t forget to click the bell icon to be notified when we upload a new video. Subscribe Here!
Copyright Notice© RecipeThis.com. ALL content including photos are copyright protected. Sharing of our recipes is both encouraged and appreciated via the social share buttons. Copying and/or pasting full recipes to any social media channel or onto your own website is strictly prohibited.