Slow Cooker Pulled Gammon. Looking for a fun alternative to pulled pork? Then you must try pulled gammon in the slow cooker. Delicious, easy, perfect for sandwiches and full of great flavours.

This is the sequel to our slow cooker gammon in water and shows you a new way to cook a gammon joint at home in your slow cooker.

Yesterday on the blog we showed you how to make slow cooker gammon in water. Such an easy concept for slow cooking roast gammon without needing to soak the gammon joint first.

But what if you could take your slow cooker gammon to the next step and transform it into pulled gammon instead?

Using the same starting recipe and starting ingredients as a classic slow cooker gammon, but cooking it for longer to make it pulled like pulled pork, then going the American way with barbecue sauce and baps?

Well, that is exactly what we did, and our pulled gammon tasted AMAZING.

It has now become a regular thing in the Milner house and thanks to being able to get a large gammon joint from Aldi for less than £4 this is perfect for a great Friday night feast.

Can You Cook Gammon In A Slow Cooker?

Can You Make Pulled Pork With A Gammon Joint?

Yes, you sure can. Pulled gammon in the slow cooker is similar to pulled pork and you can add the same barbecue sauce, put it in the same burger baps and enjoy it in the same way.

When I went to Aldi I found that a gammon joint was cheaper than a pork shoulder, yet the texture and great flavour was the same.

If you are curious about the difference between a gammon and pork joint, note that gammon is French for hind leg. Pork cuts tend to come from the rear and front, whilst gammon is common from various parts of the back of a pig.

Because they are similar cuts, they can be used in each others recipes. Like using gammon instead of pork for pulled gammon.

How To Make Gammon Less Salty?

Though the biggest difference of all, is that gammon is cured with a LOT of salt, and many are put off by gammon because of its salt level.

What we recommend is that you cook your pulled gammon in the slow cooker and in either water, Fanta, or Coke. Then this method will soak your gammon as it cooks and get rid of the high salt taste.

What Size Gammon For 8?

When we made our simple slow cooker gammon, it was for the five of us. Two under 7’s, our adult son and us parents.

We had used a 1.2kg/2.6 pounds and we had enough for pulled gammon baps for all of us. Plus, there was enough for a second round too.

Because of our family size, I would recommend that if you want to feed 8 pulled gammon than you focus on a 1.5kg gammon.

Or if you are making regular gammon for a roast dinner, that because of all your side dishes, that you will be well fed on a 1kg joint.

Gammon – We used a 1.2kg gammon joint in this recipe. You could go smaller or bigger and use unsmoked or smoked gammon. Though note if you are just having pulled gammon baps that this recipe will easily make 8 of them.

Water – For pulled gammon, you will need enough water to cover the gammon to ¾ covered. This is the trick for reducing the salt and making sure the gammon is tender and perfectly pulls apart.

Seasoning – I love my gammon with parsley and oregano. You can use the same or mix and match.

Sauce – I love American style pulled pork and to make it in the same way with gammon, simply have some barbecue sauce to hand. You can also use our homemade barbecue sauce if you prefer.

Then for the kitchen gadgets that we have used in this slow cooker pulled gammon, it has just been our Crockpot. We have this one and it does an amazing job and is also ideal for browning meat too.

We also used these meat claws; we find them to be the best and are ideal for any pulled meat.

How To Cook Pulled Gammon?

How Long Does Gammon Take In The Slow Cooker?

If you are making pulled gammon in the slow cooker the cook time is 6 hours on high or 10 hours on low. This is fantastic for when you are working away from home, because you can cook it on low and prep it the night before and turn the slow cooker on when you wake up.

Then when you arrive home from work its ready for pulling apart.

Gammon In Water To Pulled Gammon

Did you note the difference between standard gammon in water, to delicious pulled gammon? It is all about the extended cook time.

Gammon when cooked in the slow cooker for 4 hours will produce perfect roasted ham. But gammon cooked longer for 6 hours will be fall apart like pulled pork.

Then its all about adding the sauce to the pulled meat and enjoying.

PS. If you are concerned that your gammon is not cooked enough for pulling, then do the fork test and if as you try to get the gammon joint out of the slow cooker with a fork, if it breaks on you, then it is done.

Can You Reheat Pulled Gammon?

Yes, you can. I love to reheat pulled gammon or pulled pork and its also fantastic for loading into other dishes to make use of the leftovers.

Because they are so easy to mix and match, do check out our reheating pulled pork post, as it has some great ideas.

Though, do note, pulled gammon can ONLY be reheated once, so if you still have some leftover (unlikely with how much it shrinks) then serve it cold.

What To Have With Pulled Gammon?

The best way to enjoy pulled gammon is of course in pulled gammon baps, in a similar way to how pulled pork sliders are made in the USA.

Here are my pulled gammon baps:

Of course, you can also go low carb too. Another great way is to swap our chicken for pulled gammon in our air fryer cobb salad.

More Gammon Recipes To Try Next: 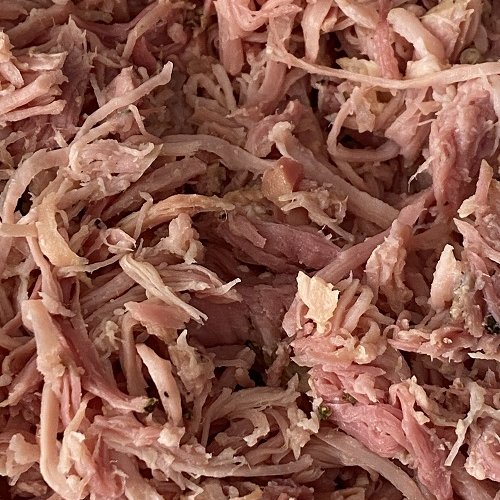 Warm. I recommend using warm water from the tap when filling up the slow cooker. This will help speed up the process of cooking the gammon and cold water can add extra cook time. Ahead. You can also make your pulled gammon ahead of time and then leave in the fridge for later. Fork. I recommend doing a fork test at about 6 hours then if it starts to fall apart as you pick it up on a fork then it is done. If it doesn’t then give it an extra hour. Thanks for reading our slow cooker pulled gammon recipe on Recipe This. We have many more slow cooker recipes for you to check out next. Though if you would like more slow cooker meats, I recommend you try our slow cooker goulash recipe next.

Calories: 332kcal | Carbohydrates: 29g | Protein: 38g | Fat: 6g | Saturated Fat: 2g | Polyunsaturated Fat: 2g | Monounsaturated Fat: 2g | Trans Fat: 1g | Cholesterol: 93mg | Sodium: 445mg | Potassium: 730mg | Fiber: 2g | Sugar: 7g | Vitamin A: 2729IU | Vitamin C: 4mg | Calcium: 133mg | Iron: 3mg
Nutrition InfoPlease Note: Nutrition values are our best estimate based on the software we use at Recipe This and are meant as a guide. If you rely on them for your diet, use your preferred nutrition calculator.
Are We Friends On Pinterest?If we are not and you use Pinterest then follow us @RecipeThisBlog for more delicious recipes.
Fancy A Video?Subscribe to the Recipe This YouTube Channel for full length recipe videos. Don’t forget to click the bell icon to be notified when we upload a new video. Subscribe Here!
Copyright Notice© RecipeThis.com. ALL content including photos are copyright protected. Sharing of our recipes is both encouraged and appreciated via the social share buttons. Copying and/or pasting full recipes to any social media channel or onto your own website is strictly prohibited.