Slow Cooker Gammon Steaks. A delicious gammon steak recipe showing you how to cook gammon steaks in the slow cooker. This is a dump and start one pot meal in one that includes gammon steak, potatoes, apples, and buttered garden peas.

Whether you call it gammon steak or ham steaks, you will love how this slow cooker meal comes together with hardly any effort.

But I have something even better than our slow cooker gammon steak for you to check out first.

I always remember gammon steak as a kid. Normally served down the pub with a choice of either pineapple or a fried egg and always served with chips and peas.

Then I moved to Portugal and didn’t have a gammon steak for a number of years. It just isn’t a thing here and I must admit it was one of those easy dinners that I missed.

Last year I noticed that gammon steaks have been stocked in our local English supermarkets and I bought some and showed many of our readers how to cook air fryer gammon steak and chips.

It has been a big hit, which I believe is mainly because we show you how to cook gammon steak and chips together. No messing about doing gammon steaks in one pan, whilst doing the chips in another.

Well, I was asked recently if I could show you how to cook gammon steaks in the slow cooker and today, I have finally managed to get another batch of gammon steaks and love how this all comes together.

What Is Gammon Steak?

If you have not had a gammon steak before, let me explain what it is in more detail.

Firstly, if you are outside of the UK & Australia, then you probably refer to it as a ham steak.

Gammon is what Brits (and some other countries) call ham before it is cooked. It can be sold as a roasting joint in a similar way to buying a boneless ham joint.

The gammon steak is gammon that has been cut into steaks in a similar way to buying pork steak and makes a very economical family dinner.

Cooking gammon steaks in the slow cooker is also amazing because of how tender it makes the gammon, and it feels like you are getting a really expensive meal, when you are not.

I love the simplicity of this slow cooker gammon dinner. This is all you need to make it at home in your slow cooker:

Think about those 5 ingredients a minute and I bet most of us have these in, without any extra grocery shopping.

Plus, if you want to be more traditional, then you can add some sliced pineapple or a fried egg.

How To Cook Gammon Steaks?

This is how to cook gammon steaks in slow cooker:

I am sure now you can see just how simple it is to cook gammon steaks in the slow cooker.

If you want to create a gammon steak sauce, then it is easy. Grab about ¼ of your potatoes and apples and about a 3cm square piece of gammon that you have cut from the end. Along with any juices in the bottom of the slow cooker from the gammon.

Load them all into a blender and blend until smooth.

You now have a yummy, creamy gammon steak sauce to serve with your steak.

Do You Put Water In The Slow Cooker When Cooking Gammon?

No, you don’t. Like a lot of meats that you cook in the slow cooker, gammon doesn’t need any water as it creates its own liquid from the fat.

However, sometimes you want to marinate gammon in a sauce in which case you can add liquid. Such as slow cooker gammon in coke, or slow cooker fanta gammon.

How Long To Cook Gammon Steak?

The ideal gammon steak cooking time is 4 hours. That way your gammon steaks will be tender, your potatoes and apples will be perfectly cooked and your peas will be thoroughly heated.

Though note, we did cook our gammon steaks on high and you could adjust to 7 hours on low if you prefer. 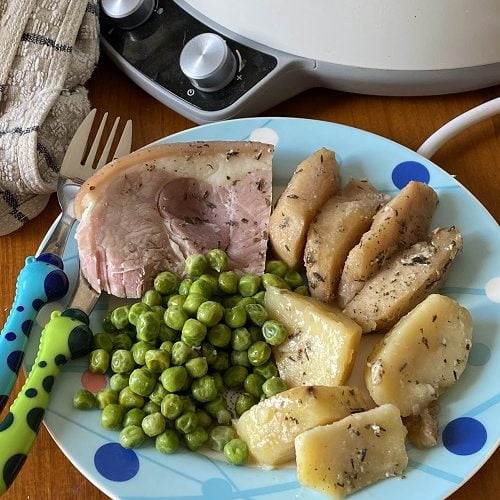 Gammon. If you are in the US then you need to be using ham steaks instead of gammon steaks. Sauce. Blend leftover potatoes, apples, and juices to make a quick gammon steak sauce. You can also freeze this for another time. Thanks for reading our slow cooker gammon steaks recipe on Recipe This. We have many more slow cooker recipes for you to check out next. Though if you love simple slow cooker classics, then I recommend you try our Slow Cooker Topside.
Nutrition InfoPlease Note: Nutrition values are our best estimate based on the software we use at Recipe This and are meant as a guide. If you rely on them for your diet, use your preferred nutrition calculator.
Are We Friends On Pinterest?If we are not and you use Pinterest then follow us @RecipeThisBlog for more delicious recipes.
Fancy A Video?Subscribe to the Recipe This YouTube Channel for full length recipe videos. Don’t forget to click the bell icon to be notified when we upload a new video. Subscribe Here!
Copyright Notice© RecipeThis.com. ALL content including photos are copyright protected. Sharing of our recipes is both encouraged and appreciated via the social share buttons. Copying and/or pasting full recipes to any social media channel or onto your own website is strictly prohibited.