You will love this one pot slow cooker bacon chop recipe. Perfect for busy weeknights and the sauce is so good, you will want to save some for another meal.

I was late to the bacon chop fan club. Not because I don’t like bacon, but because I had never heard of a bacon chop before, until one of my UK readers suggested it.

I mentioned that we were moving back to the UK (this was back in June 2021) and what British slow cooker recipes you would like to see.

This one lady asked for bacon chops.

I added them to my to do list and when we had been back in the UK a few months, went to the butchers and bought my first ever bacon chops.

Then loved them so much that I went back for more.

One batch was to make this slow cooker bacon chop recipe and the other for a bacon hotpot.

We now love bacon chops so much that whenever we go to the butchers, we have some!

This recipe today is my favourite way to cook bacon chops. It becomes a cheap all in one slow cooker meal and its perfect because you get your meat, potatoes and veggies and sauce all at the same time.

What Are Bacon Chops?

If you have not heard of bacon chops before, then let me explain. Bacon in the UK is much leaner compared to the bacon that they have in the US.

Its so lean like pork that many Americans when they see a slice of our bacon cooked assume its not cooked properly because of its colour.

It is often referred to as back bacon.

That back bacon if you put 6-8 slices together and didn’t chop them would be the height of a pork chop and would be called a bacon chop.

Essentially a bacon chop is a big piece of bacon that is unsliced.

What Is The Difference Between A Pork Chop & A Bacon Chop?

A pork chop comes from the same place as the pork loin. Remove the bone from a pork chop and you have pork loin steaks.

Whilst a bacon chop comes from the back of the pig where the back bacon is cut from.

Is A Bacon Chop The Same As Gammon?

No, they are a little different. Gammon is cured ham, or the same as Virginian ham and a bacon chop comes from the back of the pig and is the same as Canadian bacon.

Is Bacon Good In A Slow Cooker?

Yes, bacon is absolutely delicious in the slow cooker. Bacon is fantastic for quick cooking as its naturally tender. Then add in a slow cook in your Crockpot and bacon becomes so tender and just melts in your mouth.

What To Serve With Bacon Chops?

Bacon chops, which are also known as bacon steaks, are fantastic served with potato and veggies in a similar way to a classic British weeknight dinner.

I recommend going with baby potatoes, as they are slower cooking and wont go to mush, and root veggies such as carrots for the same reason.

We are also using our method of making a cider and veggie gravy from the leftovers from the slow cooker.

Chops – We used 4 bacon chops in this recipe. They are not huge and shrink when cooking, so you want to aim for 2 bacon chops for each person you are serving.

Potatoes – We also gathered up all the smaller potatoes from our bag of spuds. The sort that was pointless peeling as you would have too much waste. You could also buy a pack of new potatoes or salad potatoes specifically for this recipe.

Carrots – I also recommend peeling and dicing some carrots. Carrots are fantastic for the base of your creamy sauce and also don’t go too mushy when you slow cook them.

Cider – Then instead of cooking with some stock, I recommend a can of cider. This works as the base for your sauce but also adds extra flavour to your bacon chops recipe.

Seasoning – Then for seasoning your bacon chops I recommend parsley, thyme, salt, pepper and then some mustard for your sauce.

Then for the kitchen gadgets that we have used in this bacon chops recipe it has just been our Crockpot Slow Cooker. We have this one and its wonderful for many types of slow cooker recipes and also great for one pot midweek dinners.

How To Cook Bacon Chops?

And I am sure you can see why this recipe for bacon chops is a true favourite of mine.

Note that the bacon chop size and texture is very similar to a pork chop. So anyway you would enjoy a boneless pork chop, you can do with a bacon chop.

Your bacon chop recipe is below, note you can print it out with or without photos, adjust servings, or click between metric and imperial depending on where you are in the world. 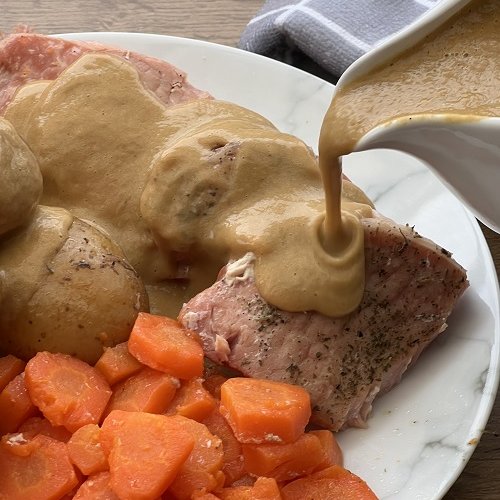 Sauce. I always use the sauce to make use of the veggies at the bottom that are too mushy for the dinner plate. You can mix and match ingredients and just add a little of the liquid at a time to get the right consistency. Thanks for reading our bacon chops recipe on Recipe This. We have many more slow cooker recipes for you to check out next. Though if you would like more slow cooker dinner recipes, do check out our slow cooker irish lamb stew recipe next.

Calories: 414kcal | Carbohydrates: 28g | Protein: 11g | Fat: 29g | Saturated Fat: 10g | Polyunsaturated Fat: 5g | Monounsaturated Fat: 13g | Trans Fat: 0.1g | Cholesterol: 48mg | Sodium: 614mg | Potassium: 648mg | Fiber: 3g | Sugar: 19g | Vitamin A: 10737IU | Vitamin C: 15mg | Calcium: 73mg | Iron: 2mg
Nutrition InfoPlease Note: Nutrition values are our best estimate based on the software we use at Recipe This and are meant as a guide. If you rely on them for your diet, use your preferred nutrition calculator.
Are We Friends On Pinterest?If we are not and you use Pinterest then follow us @RecipeThisBlog for more delicious recipes.
Fancy A Video?Subscribe to the Recipe This YouTube Channel for full length recipe videos. Don’t forget to click the bell icon to be notified when we upload a new video. Subscribe Here!
Copyright Notice© RecipeThis.com. ALL content including photos are copyright protected. Sharing of our recipes is both encouraged and appreciated via the social share buttons. Copying and/or pasting full recipes to any social media channel or onto your own website is strictly prohibited.