Slow Cooker Gammon In Water. A simple way to cook gammon in the slow cooker with water. Perfect for serving for your Sunday roast, gammon sandwiches and so much more.

If you have not tried cooking gammon in water, then it is a must try and tastes amazing and you will wonder why you haven’t made gammon like this before.

If you have followed Recipe This for a while, you will know that we are HUGE gammon fans. We have been buying gammon for years and then cooking it in our favourite kitchen gadgets.

It amazes me how tender gammon is when cooked in the slow cooker and how flavoursome it is too. I simply couldn’t go back to cooking gammon in the oven now.

But what if you don’t have a big bottle of Fanta or coke to hand? Well, that is when slow cooker gammon in water becomes your new best friend and today, I wanted to show you how it is done.

Can You Slow Cook Gammon In Water?

Yes, you can. Gammon is much better when cooked in water in the slow cooker compared to cooking on its own. It makes the gammon even more tender and reduces the high salt at the same time.

If you’re an American reading this, you are probably wondering what an earth gammon is and what your alternative is.

Well, gammon is simply salty cured raw ham that has been prepared in a similar way to bacon. Once it has been cooked it becomes ham.

It is also very similar in the US to Virginia ham.

Why Soak Gammon In Water?

Because gammon has a high salt content, you can end up with very salty gammon if you don’t soak it in water as it cooks.

Many recipes for gammon, especially when you roast the gammon, will ask you to soak the gammon first in water overnight.

This gets rid of the high salt taste.

Gammon In Slow Cooker With Water

But instead of an overnight soak of your gammon in water, you can simply cook gammon in the slow cooker with water instead. Then the high salt content, will reduce as it cooks.

Then you will have gammon that will be perfectly tender thanks to the slow cooker and not taste like it has been prepped with too much salt.

Do I Need To Put Water In Slow Cooker With Gammon?

No, you don’t. A slow cooker gammon joint in water is just one way that you can cook gammon. It is my favourite and the easiest, but its not the only method.

The point of the water is to reduce the salt (no soaking needed) and to make the gammon even more tender.

But you could cook slow cooker gammon without water like you do when you make slow cooker Asian pulled pork.

The water element for me, is just producing the best ever slow cooker gammon.

Gammon – We used a 1.2kg gammon joint in this recipe. You could go smaller or bigger and use unsmoked or smoked gammon.

Water – For gammon in water, you will need enough water to cover the gammon to ¾ covered. We found that with a 1.2kg gammon joint in our Crockpot that it worked out at just over 1 Litre (just over 4 cups)

Seasoning – I love my gammon with parsley and oregano. You can use the same or mix and match.

Then for the kitchen gadgets that we have used in this slow cooker gammon, it has just been our Crockpot. We have this one and it does an amazing job and is also ideal for sauteing too.

Also note, this slow cooker gammon in water recipe was made exclusively with Aldi produce. I wanted to challenge myself to eat cheap, but good with Aldi products and if you shop at Aldi, note that this recipe is perfect for a cheap roast dinner.

How Much Water To Cook Gammon In Slow Cooker?

I recommend that you add enough water so that your gammon is ¾ submerged. You don’t want it to become too full because otherwise as the gammon produces its own liquid you could end up with too much in the slow cooker.

Typically, expect to be adding in a litre (1000ml/just over 4 cups) of water for a medium sized gammon.

How To Cook Gammon In A Slow Cooker With Water?

How Long To Cook A Gammon Joint In A Slow Cooker With Water?

This depends on how you would like your slow cooker gammon once it is cooked.

If you want gammon like a roast dinner that you can easily slice, then I recommend 4 hours.

However, if you would like gammon that is like pulled pork, then I recommend increasing the cook time to 6 hours.

More Gammon Recipes To Try Next: 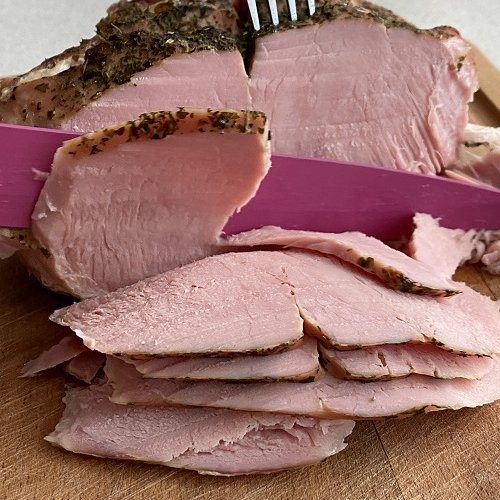 Calories: 263kcal | Carbohydrates: 5g | Protein: 44g | Fat: 6g | Saturated Fat: 2g | Polyunsaturated Fat: 1g | Monounsaturated Fat: 2g | Trans Fat: 1g | Cholesterol: 124mg | Sodium: 187mg | Potassium: 873mg | Fiber: 2g | Sugar: 2g | Vitamin A: 3612IU | Vitamin C: 5mg | Calcium: 74mg | Iron: 2mg
Nutrition InfoPlease Note: Nutrition values are our best estimate based on the software we use at Recipe This and are meant as a guide. If you rely on them for your diet, use your preferred nutrition calculator.
Are We Friends On Pinterest?If we are not and you use Pinterest then follow us @RecipeThisBlog for more delicious recipes.
Fancy A Video?Subscribe to the Recipe This YouTube Channel for full length recipe videos. Don’t forget to click the bell icon to be notified when we upload a new video. Subscribe Here!
Copyright Notice© RecipeThis.com. ALL content including photos are copyright protected. Sharing of our recipes is both encouraged and appreciated via the social share buttons. Copying and/or pasting full recipes to any social media channel or onto your own website is strictly prohibited.