The ultimate slow cooker gammon in cider recipe. A gammon joint is loaded into the slow cooker, cooked in cider with potatoes and vegetables, until perfectly cooked. Then the gammon is sliced and served with potatoes, veggies, and a homemade mustard gravy.

This slow cooker gammon joint recipe is perfect for Christmas, cold winter days or for a low effort Sunday dinner.

I love gammon, but isn’t it salty? Its always a case of don’t add salt to the gammon because the salt will overpower you.

Then you find out, that for perfect gammon you must soak it in water overnight to get rid of the overly salty flavour.

But what is there was an easier way to cook gammon in the slow cooker?

Where you could dump in the ingredients and come back later to perfectly tender slow cooker gammon with all the sides ready to go?~

Well, let me introduce you to gammon in cider.

You choose your favourite cider, add your gammon joint to the slow cooker and pour the cider over the gammon.

Can I Cook Gammon In Cider?

Yes, you can cook gammon in cider and its absolutely delicious. Its another one of those drinks that you can add to gammon to bring out its delicious flavour and reduce the salty taste.

You can use any cider you want, though I prefer a medium dry cider.

Its also not a strong cider taste once the gammon is cooked, so don’t be afraid to feed it to your kids.

Can You Slow Cook Gammon In Cider?

Yes, you can. In fact, for cooking gammon in cider, I recommend the slow cooker for the best results.

Even though, I have also done gammon in cider in the instant pot, I have found that the slow cooker gives the best flavour.

Should I Put Gammon In Water Before Cooking?

There is no need to if you are cooking the gammon joint in cider. The cider will get rid of the overly salty taste on the gammon as it slow cooks.

You can dump the gammon joint into the slow cooker at the same time as the cider and it will cook perfectly.

Can I Leave Gammon In Slow Cooker Overnight?

Yes, you can leave the slow cooker gammon overnight. BUT for perfectly sliced gammon the cook time is 4 hours on high or 7 hours on low. To leave it overnight you will have to put it on just as you go to bed and have it off 7 hours later, so it depends how much sleep you like!

However, if you want pulled gammon in cider in the slow cooker, then you can increase this to 9 hours on low.

Do You Leave The Plastic On Gammon In Slow Cooker?

No, you don’t. You need to remove the plastic from the gammon before you place it in the slow cooker.

Then the gammon will get a wonderful flavour to it from the cider and the other ingredients and be the best gammon in cider you have ever tasted!

Is This Cider Ham?

Yes, it is. Gammon is the same as Virginia ham. Gammon is uncooked ham that has been cured and carries a very salty taste, unless cooked correctly.

And you can swap classic UK gammon for Virginia ham and then use this is exact same recipe.

Gammon – I recommend you use unsmoked gammon rather than smoked as it gives a better depth of flavour with the cider and the other veggies.

Cider – You can use any cider for this gammon cooked in cider recipe. But I prefer a medium/dry cider. I also love the products of M&S and used M&S cider. You will need a litre of cider so aim for 3 cans in this recipe.

Veggies – You want to include veggies that will be great for making a nice gammon gravy with but will also be good for serving with your gammon once cooked. Therefore, avoid fast cooking veggies such as peppers, mushrooms, broccoli, courgette etc. Instead go for root vegetables such as swede, carrots, leeks etc.

Potatoes – Gammon is delicious served with potatoes and veggies. But potatoes also play an extra role in this gammon with cider and that is as a natural thickener for your gravy.

Seasoning – To compliment your gammon and cider I recommend black pepper, oregano, garlic, parsley and then mustard for making the gravy with.

Then for the kitchen gadgets that we have used in this slow cooker gammon in cider recipe it has just been our Crockpot Slow Cooker. We have this one and its wonderful for many types of meats and we have used it many times for gammon.

How To Slow Cook Gammon In Cider?

And I am sure you can see why this gammon in cider recipe is a true favourite of mine.

What To Add To Gammon In Slow Cooker?

I recommend that you add to the gammon, leeks, carrots, and baby potatoes. You might have your own favourite, but those work best, especially for making a creamy gravy with too.

You can also swap it for some other vegetables too such as swede, turnips, or parsnips.

To make my cider sauce for gammon, I have followed the same concept that I do in many slow cooker recipes.

I am a HATER of stock cubes and gravy granules and much prefer to create something from the flavours of the dish and to add hidden veggies.

Both potatoes and carrots make an exceptionally good cider sauce and then you can add the cider and gammon juices, along with a little spare gammon and make the best sauce ever.

Even better, I made more than I needed and have extra gammon gravy for the freezer to use in another slow cooker recipe.

Interesting Slow Cooker Trick – Always buy a slow cooker like this Crockpot one that we own. It can go on the stovetop to brown meat and go in the oven.

Can you make ahead your gammon recipe? Yes, you can. I often do this to save on time. You can also reheat your gammon in the slow cooker by cooking it on low for two hours.

Can you freeze leftover gammon? Yes, you sure can. Simply load into foil or Ziploc bags and freeze once cool.

All the above are amazing slow cooker recipes. Though if I could choose just one, the slow cooker brisket and gravy is hands down the absolute BEST.

Your slow cooker gammon in cider recipe is below, note you can print it out with or without photos, adjust servings, or click between metric and imperial depending on where you are in the world. 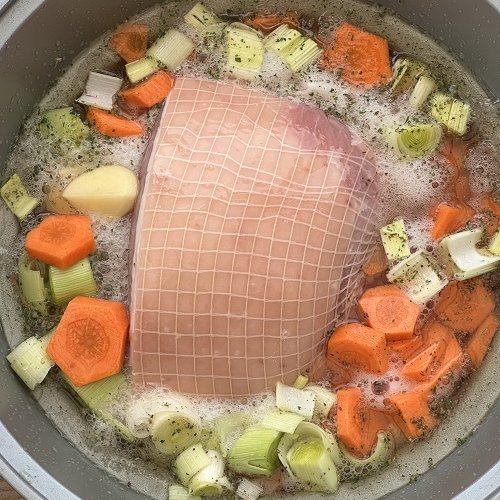 Cheese. You can also add grated cheese over the veggies for the ultimate side dish. Or swap the margarine for the cheese. Pulled. If you would like pulled gammon change the cook time to 5.5 hours on high or 9 hours on low. Thanks for reading our slow cooker gammon in cider recipe on Recipe This. We have many more slow cooker recipes for you to check out next. Though if you would like more hearty recipes, I recommend you try our slow cooker brisket and gravy next.

Calories: 856kcal | Carbohydrates: 35g | Protein: 61g | Fat: 46g | Saturated Fat: 16g | Polyunsaturated Fat: 5g | Monounsaturated Fat: 21g | Cholesterol: 165mg | Sodium: 3222mg | Potassium: 1497mg | Fiber: 4g | Sugar: 8g | Vitamin A: 5385IU | Vitamin C: 32mg | Calcium: 62mg | Iron: 4mg
Nutrition InfoPlease Note: Nutrition values are our best estimate based on the software we use at Recipe This and are meant as a guide. If you rely on them for your diet, use your preferred nutrition calculator.
Are We Friends On Pinterest?If we are not and you use Pinterest then follow us @RecipeThisBlog for more delicious recipes.
Fancy A Video?Subscribe to the Recipe This YouTube Channel for full length recipe videos. Don’t forget to click the bell icon to be notified when we upload a new video. Subscribe Here!
Copyright Notice© RecipeThis.com. ALL content including photos are copyright protected. Sharing of our recipes is both encouraged and appreciated via the social share buttons. Copying and/or pasting full recipes to any social media channel or onto your own website is strictly prohibited.