Gammon Shank. How to slow cook gammon shank and transform it into a delicious soup that is loaded with seasonal vegetables and beans.

You will love this comforting bowl of deliciousness during the winter months and best of all, its so cheap to make in your slow cooker.

I am not ashamed to admit that I love cheap family meals in the slow cooker. I get excited when I work out the cost per person and I have made a big saving on a meal for my family.

One of those foods that I find really cheap and really easy to stretch into a good sized meal is gammon shank.

Also known as ham shank in the USA, gammon shank can be slow cooked in the slow cooker, then you can shred your gammon shank and then load it up into stews, casseroles or soups, depending on how you like your shank to be served.

In today’s recipe I am going to be showing you a gammon shank slow cooker recipe that is loaded with vegetables, and the vegetables cook with the shank. Then after shredding the shank, adding beans and transforming it into a yummy stew that will feed the family.

Can I Cook A Ham Shank In A Slow Cooker?

You see, the shank is a cheap cut of meat, just like shoulder and needs to be slow cooked for the best flavour and the best texture to come shining through.

If you don’t slow cook your gammon, it is likely to be tough and not very edible.

If you are in the UK, you are likely to be searching for a gammon shank and wondering why every recipe that comes back is for ham hocks and not gammon.

This is because in the USA (even though not the same cut) they have ham hock instead and use this instead.

If you are in the UK any gammon shank from Iceland, Tesco etc can be used. Or if in the US you can swap this for either a ham shank or a ham hock.

What Is Gammon Shank?

Don’t understand what a gammon shank is? Then note, it is the same as a ham shank. In the UK gammon is referred to as cured ham before it is cooked, then when it is cooked it becomes ham.

If you walk into a British supermarket looking for ham you are likely to find package after package of gammon instead and just use this.

Vegetables – I recommend that if you are transforming your meal into gammon shank soup, that you choose your vegetables wisely. Go for vegetables that blend well, but also can last when slow cooked. Avoid broccoli and other quick cooking vegetables and go with carrots, celery, and onion. Then also added some diced apple too.

Beans – The hubby always knows when I am stretching out a meal, because the beans, peas or sweetcorn comes out. You can use any beans, though I prefer a can of classic white beans in liquid (not baked) or you can use haricot beans or butter beans. Totally your choice.

Cider – If you want a delicious flavour to your gammon shank soup, then nothing beats adding in a can of apple cider. Though if you don’t like your slow cooker gammon shank recipe with cider, you can swap this for apple juice.

Seasoning – There is nothing worse than bland boring gammon shank. I recommend thyme, parsley, and rosemary: Either one of these or all. Along with salt, pepper, and garlic. You can also add extra seasoning at the end if it doesn’t taste like it has enough flavour.

Then for the kitchen gadgets that we have used in this gammon shank recipe in the slow cooker, it has just been our Crockpot. We have this one and it does an amazing job with its slow cooker function and is also ideal for sauteing on the stovetop first.

How To Cook Gammon Shank?

How Long To Cook A Gammon Shank?

Gammon shank cooking time for us was 5 hours. This was on high in the slow cooker so expect 9 hours if cooking on low.

This allows for all the gammon shank flavours to be at its best and for it to shred perfectly. We found a shorter cook time will result in roasted gammon rather than shredded.

What To Serve With Gammon Shanks?

I love to have a bowl of warm gammon shank soup with our air fryer pull apart bread rolls. They are absolutely delicious and incredibly moreish too. You have one and I guarantee you will want to dunk another!

In the Milner household we are obsessed with gammon. We find that it tastes amazing whether slow cooked or roasted.

In fact, it was our air fryer ham (using a large gammon joint) that we had last year for Christmas.

And here are some more gammon recipes using kitchen gadgets: 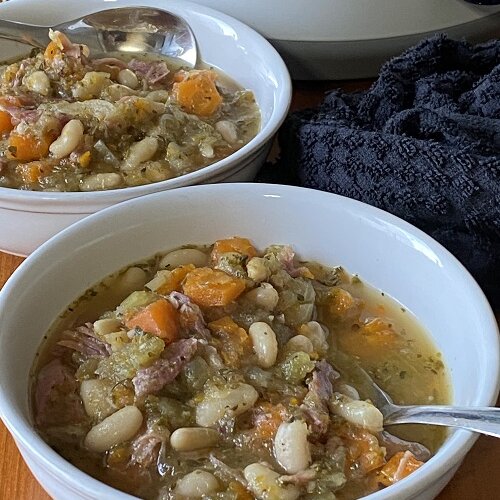 Swaps. You can use any beans. Though white beans that have been drained work best. Also, if you don’t want to use cider you can swap it for apple juice. Thanks for reading our slow cooker gammon shank soup recipe on Recipe This. We have many more slow cooker recipes for you to check out next. Though if you would like more family friendly recipes, then I recommend you try our slow cooker salmon pasta with crème fraiche recipe next.

Calories: 581kcal | Carbohydrates: 62g | Protein: 65g | Fat: 8g | Saturated Fat: 3g | Polyunsaturated Fat: 2g | Monounsaturated Fat: 3g | Trans Fat: 1g | Cholesterol: 165mg | Sodium: 294mg | Potassium: 1903mg | Fiber: 13g | Sugar: 24g | Vitamin A: 10585IU | Vitamin C: 19mg | Calcium: 182mg | Iron: 7mg
Nutrition InfoPlease Note: Nutrition values are our best estimate based on the software we use at Recipe This and are meant as a guide. If you rely on them for your diet, use your preferred nutrition calculator.
Are We Friends On Pinterest?If we are not and you use Pinterest then follow us @RecipeThisBlog for more delicious recipes.
Fancy A Video?Subscribe to the Recipe This YouTube Channel for full length recipe videos. Don’t forget to click the bell icon to be notified when we upload a new video. Subscribe Here!
Copyright Notice© RecipeThis.com. ALL content including photos are copyright protected. Sharing of our recipes is both encouraged and appreciated via the social share buttons. Copying and/or pasting full recipes to any social media channel or onto your own website is strictly prohibited.