Follow our mince and dumplings recipe today for your comfort food dinner and the only question you will need to answer is how many dumplings are going on your plate.

If there is an old fashioned food from childhood that gets me every time and I always have to have leftovers it is stew and dumplings.

I absolutely love dumplings. Whether they are dumplings with suet, dumplings without suet that have more of a cheese scone taste or a cobbler mixture, I am there with bells on.

But with the cost of food always going up year on year, I am always looking for a cheaper alternative. Just looking (as I type this) at the price of braising steak vs 5% fat steak minced beef, I notice a big difference in price.

Then of course, to make mince and dumplings you are only using ¾ of a kilo meaning that you have some leftover to make a small batch of our air fryer meatloaf. Maybe a good time for meatloaf sandwiches for lunch?

If you have only made beef stew and dumplings and want a delicious cheaper alternative, that tastes just as good, then you must try our slow cooker mince and dumplings in your Crockpot today!

Over the next few days on Recipe This I am celebrating one of my favourite ingredients in the slow cooker and that is mince aka ground meat. I love how you can grab a cheap pack of it from the supermarket and use it to make your favourite comfort food and also have great variety too.

You can follow our slow cooker mince series below:

You can also get all our slow cooker mince recipes here.

What Is Mince And Dumplings?

Mince & dumplings is an English favourite. Savoury mince as we call it, is cooked first and then English dumplings are added to the top later.

Think of it like our instant pot cottage pie, but instead of mashed potato on top you have dumplings.

But of course, instead of diced beef this is swapped for minced beef, or as the US call it, ground beef.

Mince & dumplings is one of those old school favourites that is frugal, yet delicious and there are often some leftovers to finish the next day (which is the best bit!).

For many outside of the UK that have not grown up on English dumplings, they are often confused by them, especially with the different types of dumplings.

Firstly, you have dumplings without suet. This is more like the American biscuit recipe just with less salt and no buttermilk. They are easy to make and are more of a modern dumpling served with mince.

Secondly, dumplings with suet. These are the old fashioned dumplings that your grandma would have made. They have what is called suet, which is an ingredient made with beef drippings. Most people prefer these dumplings.

Third and finally, there is the cobbler. Which is more like a scone and is often served in the same way as dumplings and is just as nice. I love this with stews and always say I should make them more often.

How Long Does Dumplings Take In Slow Cooker?

This can vary with how many dumplings that you are cooking at once in the slow cooker and how big they are.

But in this recipe for minced beef and dumplings we just added them for the last hour of cooking and they were perfectly cooked.

Do You Put Lid On When Cooking Dumplings In Slow Cooker?

Yes, you need to put the lid on for your dumplings to cook in your mince when slow cooking. Otherwise, all the heat will escape from the slow cooker and your dumplings will not be cooked in time.

How To Make Dough Balls For Mince?

With your dough balls for mince, you first need to decide which recipe that you are going to follow.

We decided on making our favourite air fryer suet dumplings, though of course we are not cooking them in the air fryer, we are just using the dough ball method and then loading them into the slow cooker.

If you can’t get suet, then opt for our dumplings without suet recipe.

Then once you have your dough balls recipe planned out, I recommend you make your recipe for dumplings whilst the mince is cooking in the slow cooker.

Then when your mince is an hour away from being done, you can simply place the dough balls into the slow cooker and finish creating your slow cooker mince and dumplings.

How Long Does Mince Take To Cook?

The mince part of your mince beef and dumplings takes 3 hours to cook. This is from loading your mince ingredients into the slow cooker, until it is fully cooked.

But what we do is add the raw dumplings to the slow cooker after 2 hours, then the dumplings and the mince can cook together.

Mince – The most important ingredient is the minced beef, or ground beef as you may call it in the US. We used lean beef mince which is best for the slow cooker because there is a lot less fat and then it won’t make your mince stew taste greasy.

Dumplings – For dumplings like Grandma I recommend following our suet dumplings recipe and using some classic Atora shredded suet.

Veggies – I love the mix of carrots, celery, and onion that go into a slow cooker beef and dumpling stew. I use the onion first to sauté the slow cooker and the carrots and celery are added later and cooks with the mince.

Tomatoes – I also use both tinned tomatoes and tomato puree or as you might call it tomato paste. The tomato combo adds a delicious flavour to your mince.

Peas – a recipe for mince and dumplings just wouldn’t be the same without stirring in some frozen peas. We love the colour of the peas in this slow cooked recipe.

Seasoning – Then for mince seasoning we used salt, pepper, mixed herbs, and parsley.

Then for the kitchen gadgets that we have used in this mince and dumplings slow cooker recipe it has just been our Crockpot. We have this one and its wonderful for many types of slow cooker recipes and also great for easy Sunday lunches.

How To Slow Cook Mince And Dumplings?

And I am sure you can see why this recipe for dumplings with mince is a true favourite of mine.

What Herbs Go With Minced Beef?

The beauty of cooking this easy mince and dumplings recipe, is that the herbs that are used to season it are simple everyday herbs.

We use just salt, pepper, parsley and mixed herbs in our mince and dumplings recipe.

Your mince and dumplings slow cooker recipe is below, note you can print it out with or without photos, adjust servings, or click between metric and imperial depending on where you are in the world. 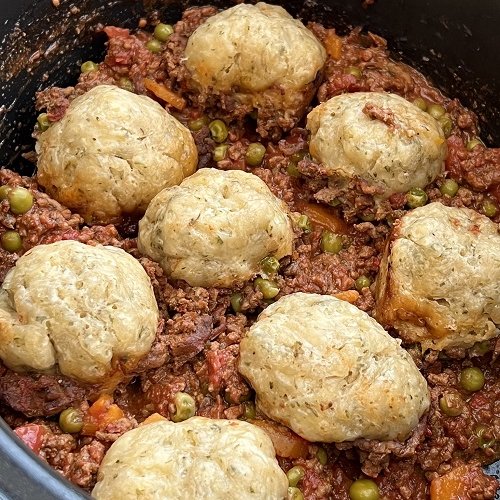 Mince. I highly recommend using 5% fat minced beef. This is because the lower in fat the less greasy the mince will become as it cooks in the slow cooker. Thanks for reading our minced beef and dumplings recipe on Recipe This. We have many more slow cooker recipes for you to check out next. Though if you would like more slow cooker dinner recipes, do check out our slow cooker sausages and onion gravy recipe next.

Calories: 662kcal | Carbohydrates: 31g | Protein: 40g | Fat: 42g | Saturated Fat: 15g | Polyunsaturated Fat: 2g | Monounsaturated Fat: 19g | Trans Fat: 2g | Cholesterol: 133mg | Sodium: 476mg | Potassium: 1409mg | Fiber: 10g | Sugar: 14g | Vitamin A: 8928IU | Vitamin C: 68mg | Calcium: 157mg | Iron: 8mg
Nutrition InfoPlease Note: Nutrition values are our best estimate based on the software we use at Recipe This and are meant as a guide. If you rely on them for your diet, use your preferred nutrition calculator.
Are We Friends On Pinterest?If we are not and you use Pinterest then follow us @RecipeThisBlog for more delicious recipes.
Fancy A Video?Subscribe to the Recipe This YouTube Channel for full length recipe videos. Don’t forget to click the bell icon to be notified when we upload a new video. Subscribe Here!
Copyright Notice© RecipeThis.com. ALL content including photos are copyright protected. Sharing of our recipes is both encouraged and appreciated via the social share buttons. Copying and/or pasting full recipes to any social media channel or onto your own website is strictly prohibited.