If you love a Bolognese, then you will love this slow cooked Bolognese that is loaded with onion, garlic, basil, oregano, carrots, and celery as well as lean minced beef.

If there is a meal from childhood that never seems to age and always has me licking my lips with excitement it is spaghetti Bolognese or as I always call it spag bol.

That slow cooked Bolognese sauce that is loaded over pasta of your choice. Then you add a little cheese and maybe have some garlic bread on the side, and you have the best comfort food ever.

But did you know that spaghetti sauce or Bolognese sauce as you might call it, tastes so much better when it is slow cooked rather than cooked fast on the stovetop?

An Italian will tell you, that you should spend hours watching over it and that the best ones are cooked slow so that they can simmer away for hours.

Whilst Italian grandmas have the time to do that, most of us are busy working and busy with our kids and don’t have the time for this and that is when slow cooked spaghetti Bolognese via the slow cooker makes a fantastic Plan B.

Today, I wanted to share with you a quick prep recipe for slow cooker spag bol that you can recreate at home in your slow cooker.

Over the next few days on Recipe This I am celebrating one of my favourite ingredients in the slow cooker and that is mince aka ground meat. I love how you can grab a cheap pack of it from the supermarket and use it to make your favourite comfort food and also have great variety too.

You can follow our slow cooker mince series below:

You can also get all our slow cooker mince recipes here.

Can You Put Mince In Slow Cooker?

Can You Put Raw Mince Into A Slow Cooker?

Do You Need To Brown Mince Before Slow Cooking?

It is NOT essential to brown mince first when slow cooking. You could simply load up raw mince into the slow cooker along with your carrots, celery and onion and the slow cooker will cook it altogether for you.

But of course, what you lose out on here, is the delicious flavour of the mince in the slow cooker, which you get from browning the mince and sauteing the onion.

Can You Overcook Bolognese In A Slow Cooker?

Yes, you can overcook Bolognese in the slow cooker, just like you could if cooking it on the stovetop. If slow cooker Bolognese is left for too long it will go dry and will not taste as nice as the Bolognese sauce that you are used to.

Though don’t worry we have the perfect spaghetti Bolognese slow cooker cook times so that you don’t have overcooked Bolognese.

Mince – The most important ingredient is the minced beef, or ground beef as you may call it in the US. We used lean beef mince which is best for the slow cooker because there is a lot less fat and then it won’t make your spag bol taste greasy.

Pasta – You can serve any pasta below your Bolognese sauce. What we did was use some spaghetti and some linguine and did one lot with our quorn Bolognese and another lot with our minced beef Bolognese.

Veggies – I love the mix of carrots, celery, and onion that go into a classic Bolognese in the slow cooker. What is often missed out in British versions is the lack of celery and carrots, which you will always find in a true Italian one.

Garlic. Frozen garlic is a genius. I buy chopped garlic from the supermarket (usually Tesco or Iceland) and you can just add a little to a recipe without needing to peel and slice garlic.

Tomatoes – I also use both tinned tomatoes and tomato puree or as you might call it tomato paste. The tomato combo adds a delicious flavour to your Bolognese.

Seasoning – Then for seasoning we used salt, pepper, basil, and oregano.

Slow Cooker Mince Quantity – I often get asked can you make a spaghetti Bolognese slow cooker recipe with 500g of mince and the answer is YES. We usually use a 750g pack because there is 4 of us but you can easily downsize.

Slow cooker spag bol with Dolmio – If you would rather use Dolmio rather than tinned tomatoes then that is not a problem. Simply swap the tinned tomatoes for Dolmio of similar quantity.

Then for the kitchen gadgets that we have used in this slow cooked spag bol recipe it has just been our Ninja Foodi. We have this one and its wonderful for many types of slow cooker recipes and also great for easy Sunday lunches.

How To Cook Spaghetti Bolognese In A Slow Cooker?

And I am sure you can see why this recipe for spaghetti Bolognese in slow cooker is a true favourite of mine.

How Long Does Spag Bol In Slow Cooker Take?

Our spag bol slow cooker recipe takes JUST 4 hours on high or 7 hours if using the low setting. Unlike a lot of our other slow cooker mince recipes, you only need to dump the ingredients in the slow cooker once, then come back in four hours to stir and tuck into your Bolognese.

How Do You Thicken Spaghetti Bolognese In A Slow Cooker?

The easiest way to thicken slow cooked spaghetti Bolognese is to stir in a little mashed potato.

Mashed potatoes are a natural thickener, and you only need a small portion to thicken a mince dish.

What I do is freeze leftover mashed potatoes into little ice cubes and then I can just add in some frozen potatoes to a slow cooker dish, and I don’t have to worry about the meat not been thick enough.

You can also go beyond spaghetti or linguine and serve your Bolognese over any of your favourite pastas. It’s a great way to use up leftovers and my favourite is to use some pasta twists or some butterfly pasta.

Your slow cooker spaghetti bolognese recipe is below, note you can print it out with or without photos, adjust servings, or click between metric and imperial depending on where you are in the world. 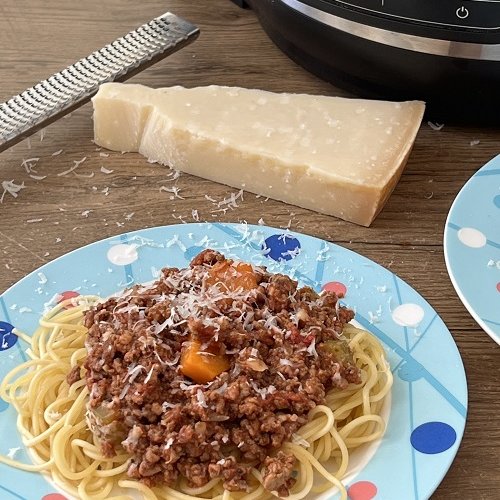 Slow. Note for the slow cooker for this spag bol recipe we used the Ninja Foodi. Just like any other slow cooker but you can use the sauté instead of the hob for browning meat and sauteing onions. Mince. I highly recommend using 5% fat minced beef. This is because the lower in fat the less greasy the Bolognese will become as it cooks in the slow cooker. Spaghetti. We used our quick soak spaghetti method which you can see in more detail in our instant pot garlic spaghetti recipe. Swaps. If you would like a low carb alternative, I recommend serving over our microwave spaghetti squash instead. Thanks for reading our spaghetti Bolognese slow cooker recipe on Recipe This. We have many more slow cooker recipes for you to check out next. Though if you would like more slow cooker dinner recipes, do check out our slow cooker sausages and onion gravy recipe next.

Calories: 585kcal | Carbohydrates: 18g | Protein: 35g | Fat: 42g | Saturated Fat: 15g | Polyunsaturated Fat: 2g | Monounsaturated Fat: 19g | Trans Fat: 2g | Cholesterol: 133mg | Sodium: 470mg | Potassium: 1189mg | Fiber: 5g | Sugar: 9g | Vitamin A: 8090IU | Vitamin C: 26mg | Calcium: 172mg | Iron: 7mg
Nutrition InfoPlease Note: Nutrition values are our best estimate based on the software we use at Recipe This and are meant as a guide. If you rely on them for your diet, use your preferred nutrition calculator.
Are We Friends On Pinterest?If we are not and you use Pinterest then follow us @RecipeThisBlog for more delicious recipes.
Fancy A Video?Subscribe to the Recipe This YouTube Channel for full length recipe videos. Don’t forget to click the bell icon to be notified when we upload a new video. Subscribe Here!
Copyright Notice© RecipeThis.com. ALL content including photos are copyright protected. Sharing of our recipes is both encouraged and appreciated via the social share buttons. Copying and/or pasting full recipes to any social media channel or onto your own website is strictly prohibited.