Air Fryer Mince Pies. How to make delicious homemade British mince pies in the air fryer. An easy to follow recipe with only a small amount of ingredients. Easy to freeze and reheat later and ideal for Christmas.

We originally shared mince pies in the air fryer back in late 2016 in the build up to Christmas 2016. Today is the updated mince pies recipe.

Many people that visit Recipe This assume we are American. After all we have instant pot dirty water hot dogs, many game day recipes such as air fryer frozen chicken wings or air fryer frozen onion rings. We also have recipes with imperial measurements as well as metric.

But we are not American born, instead we are British born. Over the years we have made more and more American friends and been educated more and more on American cuisine and culture.

The TV we watch is American and rather than calling me mummy, my kids call me mommy.

I suppose in a similar way to how a British expat would be if they lived in America. That they would still love their British food culture that they grew up on but would also embrace American food too.

Living in Portugal, many Portuguese people are taught US culture and US English rather than British, yet the British Expats are always excited to introduce the Portuguese to the mince pies at Christmas time.

Our local British supermarket sells mince pies and I always comment that they have over bought them again. But they are soon sold, and it amazes me how many Brits will buy mince pies when it is the Christmas season.

Of course, that includes me.

I claim that I am stockpiling for Santa, but I don’t think Santa eats that many mince pies!

I also make a batch of mince pies in the air fryer each Christmas and this is the EXACT air fryer mince pies recipe I follow.

If you are not British, the chances are you are probably thinking “why mince pies?”. What is the big deal about mince pies and why are they consumed in their masses at Christmas????

Well mince pies to the Brits is what cookies at Christmas are to the Americans. Think of all those American Christmas movies you watch, that is centred around Christmas Eve.

Movies like Jingle All The Way, will show the mum in the kitchen on Christmas Eve making way too many cookies.

They will be the Christmas Eve snack and often saved for Santa too.

Well that is what a British mum will be doing on Christmas Eve. A big batch of homemade mince pies, some reserved for Santa and some for eating after your Christmas dinner.

As a kid I always remember my mum making mince pies for Christmas Day. She would cook an enormous feast, and I never understood how people had the room for mince pies too. But there would never be a mince pie left.

You could make mince pies 5 days ahead and they would still be good for Christmas Day. Though I don’t have the willpower to keep mince pies in the fridge for that long!

Can Mince Pies Be Frozen?

Yes mince pies can be frozen. In fact, at the time of writing this, I have a batch of mince pies in the freezer. You could be making your mince pies in September for Christmas and getting the job out of the way.

Then get your mince pies out of the freezer on Christmas Eve and you will have a smile on your face that due to your making ahead skills, the mince pies are one less job to do.

How To Cook Mince Pies In Air Fryer?

There is a little more to it than that, but those are the simple basics!

I have had lots of questions about mince pies and about other pies in the air fryer and here is some quick Q&A for you:

Can you Bake A Pie In An Air Fryer?

I often get asked if you can bake a pie in the air fryer and answer is always a huge YES. The air fryer does an incredible job of cooking all kinds of different pies.

In the old days, I would always make mince pies in the oven, but with the air fryer they are easier to cook perfectly, without being overdone.

You also don’t have to limit yourself to mince pies. Other pies we have made in the air fryer include: 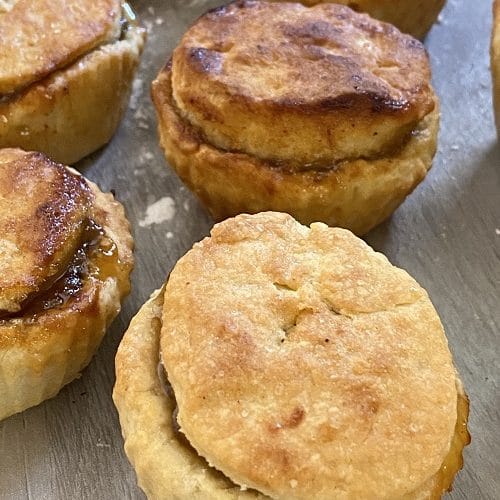 Olive Oil. My secret ingredient in the mince pie dough. It makes your pastry much lighter and it only needs a teaspoon. Cheat. You can cheat and use shop bought shortcrust pastry and just roll it out and make your mince pies. I find that shortcrust pastry is quick to make though and only buy shop bought for puff pastry. Freeze. You can make your mince pies ahead of Christmas and freeze them for later. I recommend freezing them on a baking tray. Then once 75% frozen remove and load into bags. It will stop the mince pies sticking together and save you on freezer space. Thanks for reading our air fryer mince pies recipe on Recipe This. We have many more air fryer recipes for you to check out next. Though, our personal recommendation would be to try our air fryer apple pie. Another great homemade pie recipe that you can make for the air fryer.

Calories: 600kcal | Carbohydrates: 92g | Protein: 7g | Fat: 22g | Saturated Fat: 7g | Cholesterol: 27mg | Sodium: 677mg | Potassium: 91mg | Fiber: 3g | Sugar: 47g | Vitamin A: 40IU | Calcium: 20mg | Iron: 2mg
Nutrition InfoPlease Note: Nutrition values are our best estimate based on the software we use at Recipe This and are meant as a guide. If you rely on them for your diet, use your preferred nutrition calculator.
Have You Tried The Air Fryer Mini Course? Its FREE and its delivered by email over 5 days. Ideal for beginners to the air fryer. Click Here
Are We Friends On Pinterest?If we are not and you use Pinterest then follow us @RecipeThisBlog for more delicious recipes.
Fancy A Video?Subscribe to the Recipe This YouTube Channel for full length recipe videos. Don’t forget to click the bell icon to be notified when we upload a new video. Subscribe Here!
Copyright Notice© RecipeThis.com. ALL content including photos are copyright protected. Sharing of our recipes is both encouraged and appreciated via the social share buttons. Copying and/or pasting full recipes to any social media channel or onto your own website is strictly prohibited.