Slimming World Super Speed Soup in the Soup Maker. A delicious filling soup full of Slimming World speed foods and not a Syn in sight.

This brings me back to my mum and her Slimming World speed soup.

She was often on Slimming World in the early 90’s and would want a quick weight loss and out would come a scruffy piece of paper with a Slimming World speed soup recipe written on it. It has splash marks from making the soup and was written fast while she was at her Slimming World group.

It involved a massive old fashioned stainless steel pan on the hob all day and a kitchen that stunk of tomatoes and peppers and she would then spend days on her soup.

My Dad would always laugh or complain that the nasty speed soup was out and about and that it would give her wind and it would turn into a joke.

Though back then in the early days of the Slimming World Speed Soup there was a LOT of cabbage involved, something you don’t see in the modern speed soup recipes.

I dread to think how much of it should we eat over a few days and we were all glad when it was gone.

But back then in the early 90’s you didn’t have the likes of Pinterest for sharing great recipes and the imagination from Slimming World members was rather limited.

It wasn’t anything what it is like now 2 decades later.

Though I have found that just eating it to replace your lunch for a few weeks can have an amazing effect on your weight loss too.

So, this is my go to Slimming World Speed Soup. Soup that I personally ate during my first week back on Slimming World and an excellent chance to kick start my weight loss in the right direction.

You could also turn this into your own DIY soup that you alter with the ingredients that you have in or that are cheapest or in season at the time.

Just finish it each time with tinned tomatoes and seasoning and you have it spot on.

Are You New To The Soup Maker?

Not only does it feature our popular speed soup recipe, but it also features the rest of our soup maker recipes. Making it perfect for you if you want to get more recipes for your soup maker.

What Is Speed Soup?

Speed soup is a soup made popular by members of Slimming World. The idea is that you eat as much speed soup as you can handle, or like my mum, make a big portion of it, and then eat it for a few days.

It is then a bit like a DIY version of the cabbage soup diet and will help you lose weight faster. Especially, for SW members that are stuck in a rut, or keep maintaining.

It is called speed soup because it features lots of different slimming world speed foods.

Speed foods that are also referred to by nutritionists as non-starchy vegetables.

Because your soup is essentially a healthy vegetable soup, its easy to mix and match with favourite vegetables.

Speed Soup In The Soup Maker

I am sure you wondering what vegetables go into a classic speed soup in the soup maker. Well you will be pleased to know that they are all vegetables that you can get hold of easily and none that are hard to source.

You can also mix and match with your own favourite soup vegetables, but to keep it speed you want to avoid potatoes and other starchy vegetables.

In our SW Speed Soup, we are including:

Though you could mix it up by including:

What Speed Foods Can I Use?

For quick reference here are all the speed foods that would work well in your SW speed soup:

In an ideal world I would love to make enough speed soup in my soup maker to feed me lunches for a week. That way I can just heat it up and I can smile thinking that all my meal prep is done.

But with different soup makers there is often a lack of space to be able to make soup in bulk.

If you’re using the Morphy Richards Soup Maker then keep the settings below in the recipe to serving 2, that way you know it will all fit in your soup maker. If you’re lucky enough to have a bigger soup maker than you can set the servings to 4 and bulk up on your speed soup a bit.

Would you like easy & amazing soup maker recipes from soup maker experts? Click here and join the Recipe This Newsletter. We will then send you the BEST soup maker beginner recipes direct to your email inbox along with other useful kitchen gadget resources.

Can You Freeze Your Slimming World Speed Soup?

Absolutely! I love freezing my soup maker soups. They are wonderful for freezing and often if I do soup for lunch for the two of us and if there is some left, I will freeze it for later.

But something else you should know about our SW Soup and that is that it makes the BEST EVER pasta sauce too. You could load it up on your next pasta dinner and use it for the base on a pasta bake.

And I am sure you can see now how easy it is to make this slimming world speed soup recipe in the soup maker.

If you have a microwave at work, or a flask that can keep its temperature, then this syn free soup is perfect for taking with you.

And if you are looking for something low syn to go with it, then I would recommend a batch of our air fryer egg cups which is like little omelette bites.

I also put my Slimming World soup into the Weight Watchers UK app. And it worked out as zero points with 4 points per serving being rewards in veggie points back.

So, this means on WW that I could have this slimming world vegetable soup, three times a day, gain 12 points that could then be used on chocolate!!!

Can you reheat your speed soup? Yes, you sure can. Simply load back into the soup maker and cook for 3 minutes or load into a container and microwave for 2 minutes.

Can you make ahead your speed soup? Yes, you can. I also recommend that you do this. Especially if you are doing a week of speed soups, as otherwise it will feel like you are making soup all the time.

All the above are amazing slimming world soup maker recipes. Though if I could choose just one, the slimming world cheese sauce is hands down the absolute BEST.

Your speed soup recipe is below, note you can print it out with or without photos, adjust servings, or click between metric and imperial depending on where you are in the world. 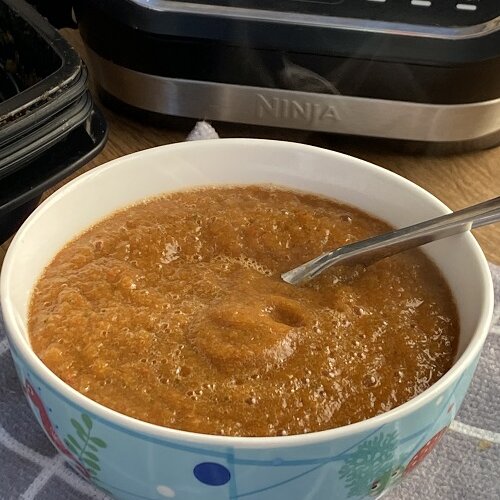 Spinach. I love to add in some extra spinach at the end. This wont fit with everything else at the beginning, so I always add it last later on. Size. The size of your soup maker can be a problem. You can make two or three batches, or you can add the extra ingredients later. See the video for adding in the tomatoes later. Thanks for reading our SW speed soup recipe on Recipe This. We have many more soup maker recipes for you to check out next. Though if you would like more easy soups, I recommend you try our soup maker cauliflower soup next.

Calories: 115kcal | Carbohydrates: 26g | Protein: 4g | Fat: 1g | Saturated Fat: 1g | Polyunsaturated Fat: 1g | Monounsaturated Fat: 1g | Sodium: 253mg | Potassium: 1054mg | Fiber: 7g | Sugar: 13g | Vitamin A: 7045IU | Vitamin C: 86mg | Calcium: 133mg | Iron: 3mg
Nutrition InfoPlease Note: Nutrition values are our best estimate based on the software we use at Recipe This and are meant as a guide. If you rely on them for your diet, use your preferred nutrition calculator.
Are We Friends On Pinterest?If we are not and you use Pinterest then follow us @RecipeThisBlog for more delicious recipes.
Fancy A Video?Subscribe to the Recipe This YouTube Channel for full length recipe videos. Don’t forget to click the bell icon to be notified when we upload a new video. Subscribe Here!
Copyright Notice© RecipeThis.com. ALL content including photos are copyright protected. Sharing of our recipes is both encouraged and appreciated via the social share buttons. Copying and/or pasting full recipes to any social media channel or onto your own website is strictly prohibited.