Mushroom soup to me is famous for one reason and that reason is the WRONG reason and needs to stop NOW! That is the Campbells cream of mushroom soup that is used in the majority of 5 ingredient recipes and is so unhealthy.

I always cringe when I see yet another mushroom soup recipe made like this.

But in our mushroom soup in the soup maker we’re showing you just how easy it is to make your own cream of mushroom soup. Not only will it be FANTASTIC for making in 5 ingredient or less dump recipes, but also if you’re in the mood for a bowl of creamy mushroom soup.

Mushroom Soup in the soup maker is so simple you could do it with the kids. You start off by cleaning your mushrooms and peeling them if they need peeling.

This is followed up with dicing the mushrooms, adding in the garlic, throwing in the seasoning and pouring in some water.

Then the soup maker does the work for you, so that you don’t have to, and you return to beautifully creamed mushroom soup.

Even better the soup maker is so easy to rinse clean, then it is ready for the next time you want to enjoy Soup Maker Mushroom Soup!

When I am cooking a soup maker recipe and getting it ready for the blog, the first thing that comes to mind is Slimming World.

This is because when you joined Slimming World you were urged to buy a soup maker in order to speed up your weight loss. It was all about the Slimming World Speed Soup.

Plus, with the soup maker being so BIG in the UK and not being that common anywhere else it became the kitchen gadget of Slimming World!

So, when you read a soup maker recipe on RecipeThis.com you will know that it will nearly always be Slimming World friendly.

However, if you’re not on the Slimming World diet, then that’s fine too as all our soup maker soups are wholesome and delicious and so comforting!

BUT something new that I noticed last year in 2018, is that the soup maker is no longer just a UK thing and that I have more and more followers of the Soup Maker that are from Australia and Canada.

But with the hype of the Instant Pot Pressure Cooker (you can get my Instant Pot Mushroom Soup recipe here) in the USA I doubt the soup maker would really take off over there!

More About The Soup Maker

If you’re new to the soup maker and want to find out more about it, then we have some interesting reads:

Soup Maker Recipes – A collection of our most popular soup maker recipes. It also includes some unusual recipes in the soup maker, that you’ve probably never even thought about.

Soup Maker Recipe Cookbook – For the low price of $10 you can access ALL our soup maker recipe in one PDF ebook.

Morphy Richards Soup Maker Vs Cusinart Soup Maker – The perfect comparison if you can’t decide which soup maker is right for you. 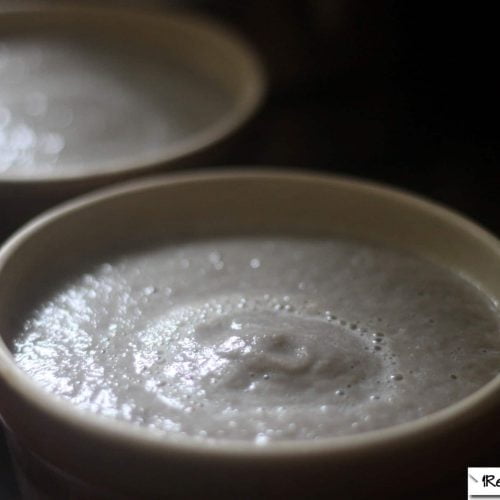 Mushroom Soup in the soup maker

You will probably notice that I set to chunky soup and not smooth. This is because the yoghurt and milk if added too early can cause the soup to curdle.   Another reason is that the mushroom soup often needs a stir first and you can end up burning the bottom of your soup maker. If you are on a dairy free diet you can swap the milk and yoghurt for 200ml of light coconut milk.

Calories: 65kcal | Carbohydrates: 7g | Protein: 7g | Fat: 1g | Saturated Fat: 0g | Cholesterol: 3mg | Sodium: 27mg | Potassium: 439mg | Fiber: 1g | Sugar: 4g | Vitamin A: 55IU | Vitamin C: 3.3mg | Calcium: 65mg | Iron: 0.6mg
Nutrition InfoPlease Note: Nutrition values are our best estimate based on the software we use at Recipe This and are meant as a guide. If you rely on them for your diet, use your preferred nutrition calculator.
Are We Friends On Pinterest?If we are not and you use Pinterest then follow us @RecipeThisBlog for more delicious recipes.
Fancy A Video?Subscribe to the Recipe This YouTube Channel for full length recipe videos. Don’t forget to click the bell icon to be notified when we upload a new video. Subscribe Here!
Copyright Notice© RecipeThis.com. ALL content including photos are copyright protected. Sharing of our recipes is both encouraged and appreciated via the social share buttons. Copying and/or pasting full recipes to any social media channel or onto your own website is strictly prohibited.