Soup Maker Leek And Potato Soup. The ultimate guide to making leek and potato soup in the soup maker.

Do you want a warming, comforting, winter soup, that tastes so good you would think cream was added, but hasn’t, that is fat free and makes you want another bowl?

Then if so, you MUST TRY a delicious bowl of our soup maker leek and potato soup.

This leek and potato soup, I originally made in my super old Cuisinart soup maker, before I got a Morphy Richards Soup Maker and I made it for Sofia. In fact it was the same month that we started Recipe This!

She would have been about a year old at the time and a super fussy little girl that was hard to feed.

I wanted to expand her food intake beyond apple, pear, carrot and broccoli. Taking her from pureed food to a nice bowl of yummy soup.

She loved my leek and potato soup on first try and so did I!

It became a regular soup in our house for a long time and now when I think of leek and potato soup, I am thinking about that cute little one year old that finally started to get an appetite.

Sofia is 5 now and in preschool. She still loves a potato soup, though thanks to her love for all things corn, she would rather have an instant pot potato corn chowder with her dad’s homemade bread maker bread.

You can make it for you, for that comforting bowl of soup, or for the kids when they need food that doesn’t require much chewing.

I have briefly mentioned it above, so I wanted to mention it in more detail here, that this soup maker leek and potato soup makes a fantastic chunky soup with the soup maker.

Instead of setting the smooth button, you go for chunky instead and when it is cooked give it an extra stir with a fork.

That way as you mix it with the fork the mushy potato pieces mix in well to make a wonderful chunky soup texture.

Potato soup is amazing. That is because when blended it is like the creamiest texture ever. I often use a bit of spare potato when I want to thicken a sauce and stew and is perfect for an alternative to corn flour.

This recipe for soup maker leek and potato soup has no cream. Instead we use the thick potatoes to make it creamy and add in some Greek Yoghurt.

You could swap Greek yoghurt for:

Or whatever your favourite soup add in is.

This soup maker leek and potato soup is made with our Morphy Richards Soup Maker. It is rather small compared to some soup makers.

If you have a bigger soup maker such as the Ninja Soup Maker or the Cuisinart Soup Maker, you can double the recipe ingredients and easily make enough for four people.

If you are working with a small soup maker, like we are, then I would recommend dicing the potatoes fairly small, so that all ingredients can fit in.

Or even better, cook our soup maker leek and potato soup in the instant pot and make a HUGE batch.

There are 5 main ingredients that go into soup maker leek and potato soup:

You can use either prepped leeks or leeks that need cleaning. Though if you do need to clean them, I suggest dicing them, loading them into a sieve and giving them a good clean under a cold tap prior to loading them up into the soup maker.

That is because leeks have an awful gritty taste if not cleaned properly and can ruin your leek and potato soup.

You can download all our recipes including the leek and potato soup (which will be in the next edition) in an easy to digest PDF.

How To Make Leek & Potato Soup In A Soup Maker?

Our soup maker leek and potato soup is one of many in our growing collection of delicious healthy soups to cook in the soup maker. Below you will find a few more suggestions to try next: 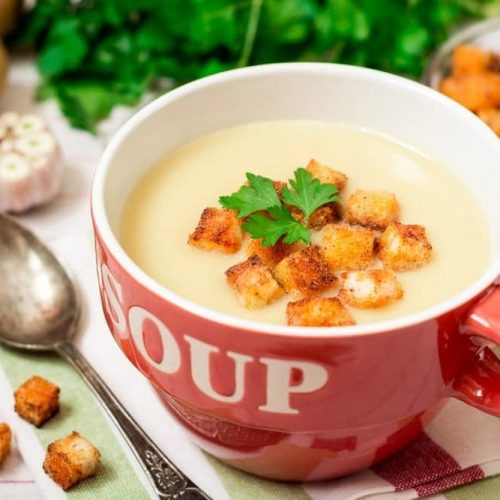 When we add our potatoes, we add potatoes that are still in their skin, they taste much better and the skin is so good for you and it blends perfectly. With soup always go with the minimum amount of liquid as otherwise it is like dishwasher water. You can always add more liquid before blending it. Plus, I find when I want soup it is often boiling hot, so I welcome adding a little water at the end. I prefer to mix my seasoning in a jug with the water. This allows an even spread of the seasonings and it results in a better flavour once cooked.

Calories: 294kcal | Carbohydrates: 57g | Protein: 15g | Fat: 2g | Saturated Fat: 1g | Cholesterol: 3mg | Sodium: 1574mg | Potassium: 1498mg | Fiber: 10g | Sugar: 6g | Vitamin A: 1544IU | Vitamin C: 49mg | Calcium: 228mg | Iron: 13mg
Nutrition InfoPlease Note: Nutrition values are our best estimate based on the software we use at Recipe This and are meant as a guide. If you rely on them for your diet, use your preferred nutrition calculator.
Are We Friends On Pinterest?If we are not and you use Pinterest then follow us @RecipeThisBlog for more delicious recipes.
Fancy A Video?Subscribe to the Recipe This YouTube Channel for full length recipe videos. Don’t forget to click the bell icon to be notified when we upload a new video. Subscribe Here!
Copyright Notice© RecipeThis.com. ALL content including photos are copyright protected. Sharing of our recipes is both encouraged and appreciated via the social share buttons. Copying and/or pasting full recipes to any social media channel or onto your own website is strictly prohibited.