Welcome to my healthy banana ice cream recipe for the ice cream maker. Updated for the summer of 2020 after originally sharing it with you back in the June of 2016 and a favourite in the Milner house.

If I were to sum up the diet or healthy lifestyle I follow, I would say that I am partly vegan, partly paleo, partly whole30 and partly keto.

I follow a clean eating diet, hate processed foods and could live off fresh vegetables if I were given the chance.

I am not a fussy eater and dinner is often a simple mix of chicken and vegetables or my other favourite instant pot salmon and broccoli.

I was raised on the 1990’s dinner is from a can and heated in the microwave diet.

With many of readers on the modern version of this and the love for frozen food, I try my best though to stick to healthy when I can.

I first heard of paleo in early 2015 from a fellow blogger and I fell in love with it.

I hated the nuts and seeds part and really do not enjoy making baked goods from coconut flour, but the rest of it was perfect for me.

It helped me shed the rest of my baby weight after having Sofia and between 2015 and 2017 I did three rounds of the whole30.

But I have a HUGE sweet tooth and if you are not having coconut flour or almond flour it limits the choices and Dominic did something amazing for me back in late 2015 and that was make me some paleo ice creams in our brand new ice cream maker.

Naturally sweetened with either honey or maple syrup or a mix of both and if you wanted to add extra fruit you could, or you can add cocoa powder.

The choice was yours.

My other paleo banana ice cream that we regularly make at home is our banana nice cream.

If you have not tried blender banana nice cream before, then its more hands on then this ice cream maker recipe and is aimed at those that do not have an ice cream maker and uses a blender instead.

In a nutshell it just uses banana and natural sweeteners such as maple syrup. Because bananas are naturally thick the banana becomes creamy vanilla ice cream.

You can read all about it below:

How To Make Banana Nice Cream In The Blender

It is amazing but its still not a dump and start ice cream maker recipe like we are showing you today.

This paleo banana ice cream is made with coconut milk giving it a double cream texture.

Imagine when you have a tub of Ben & Jerry’s or make our homemade vanilla ice cream maker recipe.

There is that ever so creamy texture because of all the single cream that is used during the churning process.

But when you make paleo banana ice cream with coconut milk you are using the coconut milk and the bananas to make it super thick and creamy.

When I have made it, or Dominic has, we have always commented on the thick texture and how it feels naughty and unhealthy when it is paleo.

There are of course many different brands of coconut milk out there and in recent months I have become obsessed with this brand.

I have always bought cans of coconut milk and always complained about the price for something standard from the can.

But I found some dried coconut milk that you just add water to and it’s amazing.

A lot less processed rubbish in it and it tastes a million times better.

Yes it is really that simple. I even slice the banana over the ice cream maker to save on washing up!

Then the only washing up is your knife and your ice cream maker when you are done. 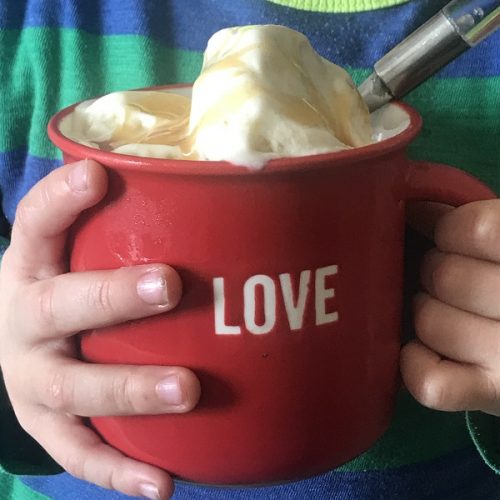 Calories: 251kcal | Carbohydrates: 28g | Protein: 2g | Fat: 16g | Saturated Fat: 14g | Sodium: 12mg | Potassium: 424mg | Fiber: 3g | Sugar: 19g | Vitamin A: 38IU | Vitamin C: 7mg | Calcium: 32mg | Iron: 1mg
Nutrition InfoPlease Note: Nutrition values are our best estimate based on the software we use at Recipe This and are meant as a guide. If you rely on them for your diet, use your preferred nutrition calculator.
Are We Friends On Pinterest?If we are not and you use Pinterest then follow us @RecipeThisBlog for more delicious recipes.
Fancy A Video?Subscribe to the Recipe This YouTube Channel for full length recipe videos. Don’t forget to click the bell icon to be notified when we upload a new video. Subscribe Here!
Copyright Notice© RecipeThis.com. ALL content including photos are copyright protected. Sharing of our recipes is both encouraged and appreciated via the social share buttons. Copying and/or pasting full recipes to any social media channel or onto your own website is strictly prohibited.