Dulce De Leche Ice Cream. Introducing you to one of the best, one of the easiest and one of the cheapest caramel ice cream maker recipes. Not only does dulce de leche taste just as good as Haagen Dazs but it is perfect for storing in the freezer for the summer or for those lazy Netflix marathons.

Welcome to my copycat Haagen Dazs Dulce De Leche ice cream recipe for the ice cream maker. Updated for the summer of 2020 after originally sharing it with you back in the June of 2016 and a favourite in the Milner house.

In the spring of 2008 and in the middle of buying a new house in England, Dominic and I had a change of heart.

The mortgage itself was a lot more than what we could afford, it was not in the nicest of areas and just did not feel right.

We backed out and then it took us 6 weeks to sell almost everything that we owned and move to Spain and then a few months later to Portugal.

Portugal has been our home since the 20th of July 2008, and I have absolutely no regrets and it was the best thing we ever did.

One big change since becoming British Expats living in Portugal is the changes in food. The Mediterranean culture and the lovely food that Portugal has.

I love the piri piri chicken, the locally grown tomatoes and do not get me started about my love for the local ice cream.

Portuguese ice cream is like other countries in continental Europe. Nothing fancy just amazingly simple ingredients that is made to taste delicious.

The first Portuguese ice cream we tried and one that we have been addicted to ever since is the amazing dulce de leche.

It is caramel ice cream that is made with sweet condensed milk until it turns to caramel.

Today I am going to show you how to make the famous dulce de leche ice cream using the ice cream maker and the instant pot.

It is so fast and easy to make and is perfect for cooking in the kitchen with your kids or grandkids.

For those that have not heard of dulce de leche the best comparison I can give you is a 460ml tub of the famous Haagen Dazs dulce de leche ice cream.

It looks like it. It tastes like it and it’s a lot cheaper than buying these expensive ice cream tubs.

If you like Haagen Dazs then you will love this homemade dulce de leche version.

The cheat ingredient for making dulce de leche is half a can of sweetened condensed milk.

You use the instant pot pressure cooker first to quickly turn it into caramel.

Then the ice cream maker is loaded up with the base ingredients of our homemade vanilla ice cream as well as your caramel.

Then it happily churns away creating you a delicious batch of dulce de leche ice cream.

If you have not done so already. You can use your instant pot to turn a boring can of sweetened condensed milk into amazing creamy caramel.

Its much cheaper than buying cans of condensed milk that has already been made to caramel and its amazing how quick it is compared to the old stovetop method.

I recommend getting the instant pot started as your first job, as you need to allow for the instant pot to cool so that you can touch the condensed milk without burning yourself.

You can also get our full guide here for instant pot condensed milk.

Though because we wanted to imagine we were eating Haagen Dazs ice cream at home we used previously bought Haagen Daz tubs and spoons.

We only used ½ a can of condensed milk to make our dulce de leche ice cream. For the other half of the can we made Ben & Jerry’s Caramel Chew Chew or you could make 2 batches of this.

For further reading you can browse through the rest of our vice cream maker recipes below: 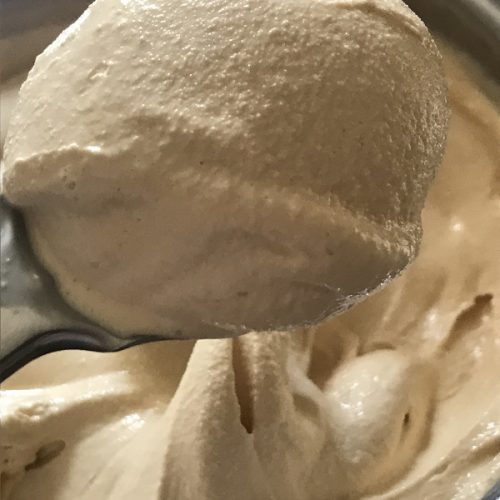 Dulce De Leche Ice Cream. Introducing you to one of the best, one of the easiest and one of the cheapest caramel ice cream maker recipes. Not only does dulce de leche taste just as good as Haagen Dazs but it is perfect for storing in the freezer for the summer or for those lazy Netflix marathons.
Prep Time10 mins
Cook Time1 hr 28 mins
Total Time1 hr 38 mins
Course: Dessert
Cuisine: Ice Cream Maker
Servings: 6
Calories: 273kcal
Author: RecipeThis.com

If you want your ice cream quicker, then I recommend 20 minutes in the freezer instead of 1 hour in the fridge. If you prefer you can print off a separate recipe for our instant pot condensed milk to caramel.

Calories: 273kcal | Carbohydrates: 25g | Protein: 4g | Fat: 17g | Saturated Fat: 10g | Cholesterol: 181mg | Sodium: 38mg | Potassium: 108mg | Sugar: 23g | Vitamin A: 663IU | Vitamin C: 1mg | Calcium: 91mg | Iron: 1mg
Nutrition InfoPlease Note: Nutrition values are our best estimate based on the software we use at Recipe This and are meant as a guide. If you rely on them for your diet, use your preferred nutrition calculator.
Are We Friends On Pinterest?If we are not and you use Pinterest then follow us @RecipeThisBlog for more delicious recipes.
Fancy A Video?Subscribe to the Recipe This YouTube Channel for full length recipe videos. Don’t forget to click the bell icon to be notified when we upload a new video. Subscribe Here!
Copyright Notice© RecipeThis.com. ALL content including photos are copyright protected. Sharing of our recipes is both encouraged and appreciated via the social share buttons. Copying and/or pasting full recipes to any social media channel or onto your own website is strictly prohibited.