Ice Cream Maker Caramel Chew Chew. How to make your favourite Ben & Jerrys caramel chew chew using your ice cream maker. Not only is this Ben & Jerry’s copycat recipe amazing, but it is also much cheaper, uses natural ingredients and is much lower in calories.

Welcome to my copycat caramel chew chew ice cream recipe for the ice cream maker. Updated for the summer of 2020 after originally sharing it with you back in the June of 2016 and a favourite in the Milner house.

If there is going to be one complaint about not getting favourite things here in Portugal it must be the lack of Ben & Jerry’s and the high prices.

I absolutely love Ben & Jerry’s Ice Cream and could not imagine life without it.

It was after Dominic & I had first moved to a new house that he introduced me to Ben & Jerry’s. I had never had it before, and he told me it was the best ice cream.

I fell head over heels in love with Ben & Jerry’s and blamed Dominic forever for getting me hooked on something that came out at more than 1000 calories a tub.

There were a few flavours I liked and the regular go to Ben & Jerry’s favourites was either Caramel Chew Chew or Cookie Dough, whereas Dominic stuck to his love for Chocolate Brownie.

We then moved to Portugal and it was double the price and you could only get Cookie Dough & Chocolate Brownie.

I always missed Caramel Chew Chew and used to dream about it!

Thankfully, that is what I said about Ben & Jerry’s back in 2016 and they have since improved flavour choice and we can now also get phish food, Netflix and chill and of course strawberry cheesecake.

I now mix it up between Ben & Jerry’s caramel chew chew, cookie dough and my other favourite strawberry cheesecake.

Though I still get incredibly jealous of my American friends that meet up with the Ben & Jerry’s van in the park when they give out free ice cream.

I mean why can’t that happen locally?

Though I did get an amazing Ben & Jerry’s flavour testing session in the summer of 2012.

We were on holiday visiting family in Vermont and had the pleasure of visiting the Ben & Jerry’s factory.

I think we left with about 10 different tubs because we could not believe how many different flavours there were and even got the chance to test the latest one.

Here is the shocked look on Kyle’s face when he saw how many flavours they do not have in Europe:

Sadly, we knew that none of these flavours will make it to Portugal and it would be a once in a lifetime taste test.

We all agreed that the Ben & Jerry’s factory tour was so boring, but well worth it for the free ice cream.

Though, I am sure my American family thought I was weird with my Ben & Jerry’s obsession, when it is something that is always there for them, a bit like Portugal and how much we take for granted the endless supply of oranges.

Since 2016 though, they have stopped supplying Ben & Jerry’s Caramel Chew Chew, apparently I was told it was an Irish version and not even in the United States, so I decided the best thing to do was to make Caramel Chew Chew in the ice cream maker instead!

I have always watched for deals on the Ben & Jerry’s ice cream and then grabbed a few tubs when they are knocked down in price.

Here in Portugal the standard price is almost $7.50 a tub and when there are 3 adults in the family, all wanting Ben & Jerry’s it can become rather expensive.

What we do instead is wait for it to become half price and then buy some and load caramel chew chew into the freezer.

If you have not tried Ben & Jerry’s caramel chew chew before then think of it like a very thick creamy ice cream.

That gives you their vanilla flavour. Then add in chocolate chunks with caramel in the middle along with lots of caramel and you have caramel chew chew.

Then if you were to recreate it at home using an ice cream maker you would need to find some caramel filled chocolate chunks and caramel and you are all set.

Even better, it is one of the easiest ice cream maker recipes to recreate at home.

Okay so there is a lot of calories in a big tub of Ben & Jerry’s. In fact, last time I had the guts to look it was over 1000 calories.

But those little 100ml caramel chew chew tubs are a much lower calorie alternative.

I have the little cute tubs when I am on the seafront in the summer and its nice to walk down the promenade of our favourite beach with a Ben & Jerry’s in our hands.

But if you want to recreate these little tubs of Ben & Jerry’s at home then use ramekins and it will provide a similar sized ice cream.

In this recipe today I am portioning up the Ben & Jerry’s into two big mugs that are perfect for romantic nights in.

I am sure that if I did not have such a sweet tooth, I would be super skinny, but hey life is short!

Though what I did notice when looking up the nutrition info on Ben & Jerry’s is that our homemade version is half the calories but has 4 times the amount of caramel and chocolate in it.

So maybe my compromise is that I can eat two tubs of my homemade stuff a night instead????

Though Peppa always helps me with any bits I missed:

The ingredients to make your own homemade Ben & Jerrys Caramel Chew Chew are ingredients that you can easily buy from the supermarket.

You can use any type of caramel that is chocolate coated. But if you want to create a gluten free ben and jerry’s you will need to choose a gluten free version.

We usually use either rolos or munchies and then chop them into small pieces before loading them into the ice cream.

Can I say that I love both Ben & Jerrys Caramel Chew Chew and their other popular flavour cookie dough?

Both are fantastic and taste AMAZING.

But if you are not a big fan of raw cookie dough then it might not be for you.

Dominic my husband hates raw cookie dough and because of this would never eat Ben & Jerry’s Cookie Dough.

Though myself and my son Kyle would buy whichever we saw in the freezer first as they are both delicious.

If you are struggling to choose why not make both? We also have a Ben & Jerry’s Cookie Dough recipe for you to try too.

If I were to write a caramel chew chew ben and jerry’s review, it would include how amazing and addictive the ice cream is and then that you must try cookie dough next.

I have looked online and could not find an answer of whether Ben & Jerry’s caramel chew chew is gluten free or not. Some places said it was and others said it was not.

What I can say is that our copycat version of Caramel Chew Chew is very much gluten free. Just make sure you choose chocolate to add in that is gluten free.

There are 661 calories in our caramel chew chew recipe. This works out at 132 calories per 100ml.

However, if you ate 100ml of official Ben & Jerry’s caramel chew chew you would be looking at 270 calories.

I assume they use double cream, while we use single cream as being the biggest factor in the calories.

If you are on Slimming World and want to work out Ben & Jerry’s Caramel Chew Chew Syns we recommend that you half them, as our recipe is half the calories of the real thing. 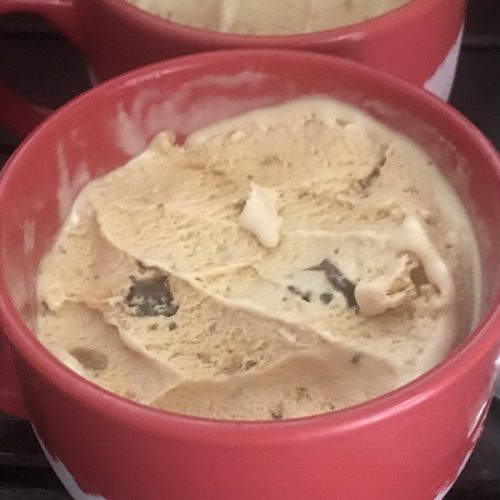 If you want your ice cream quicker, then I recommend 20 minutes in the freezer instead of 1 hour in the fridge. We have made this with both munchies and rolo chocolate. With either make sure they are chopped into bite sized chunks. Avoid loading the chocolate chunks in at the beginning. The caramel will go like rocks and break your teeth. If you prefer you can print off a separate recipe for our instant pot condensed milk to caramel. Do note that before freezing it the caramel chew chew is a little liquid based like you see below. But trust me when I say it does firm up in the freezer. Then when you take it from the freezer it like a real tub that takes a few minutes to fully soften. 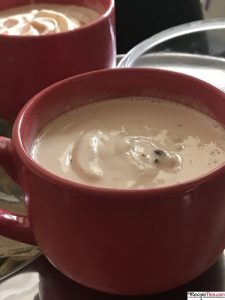 Calories: 1055kcal | Carbohydrates: 104g | Protein: 16g | Fat: 66g | Saturated Fat: 38g | Cholesterol: 554mg | Sodium: 156mg | Potassium: 325mg | Fiber: 1g | Sugar: 97g | Vitamin A: 1988IU | Vitamin C: 1mg | Calcium: 369mg | Iron: 1mg
Nutrition InfoPlease Note: Nutrition values are our best estimate based on the software we use at Recipe This and are meant as a guide. If you rely on them for your diet, use your preferred nutrition calculator.
Are We Friends On Pinterest?If we are not and you use Pinterest then follow us @RecipeThisBlog for more delicious recipes.
Fancy A Video?Subscribe to the Recipe This YouTube Channel for full length recipe videos. Don’t forget to click the bell icon to be notified when we upload a new video. Subscribe Here!
Copyright Notice© RecipeThis.com. ALL content including photos are copyright protected. Sharing of our recipes is both encouraged and appreciated via the social share buttons. Copying and/or pasting full recipes to any social media channel or onto your own website is strictly prohibited.