Terrys Chocolate Orange Ice Cream. How to make your favourite Terrys chocolate orange ice cream using your ice cream maker. Not only is this Terry’s copycat recipe amazing, but it is also much cheaper, easy to make in bulk and perfect for kids ice cream parties. Not forgetting a perfect use of your Terry’s chocolate orange leftovers.

Welcome to my copycat terry’s chocolate ice cream recipe for the ice cream maker. Updated for the summer of 2020 after originally sharing it with you back in the June of 2016 and a favourite in the Milner house.

You know the one thing I hate about brands? When they bring out a one-off product, I fall in love with it and I never see it again!

It really drives me crazy and usually happens for either chocolate or ice cream.

Well in this case I remember the most delicious ever McDonalds McFlurry that came with Terry’s Chocolate Orange. It was beyond delicious.

Then (if memory serves me correctly) this was followed up with a McFlurry based on Cadbury’s Caramel.

Both of these were AMAZING and I was gutted when I finished the ice cream and wanted another and another.

I still say that now when Kyle wants one of my Terry’s chocolate orange segments.

I never saw either of those McFlurry’s again and I believe they were a one off special to go with a sporting event that was being promoted at McDonalds.

Then every now and again a different “one off” flavour at McDonalds would do the rounds and I would fall in love and then it would be GONE.

When we moved to Portugal we wondered what would be on offer. Well I should have given more attention to the UK because they never have any special flavours that I like.

Right now, we have Snickers as a one off, though not good given my nut allergy. But most of the time it is limited to either Oreos or KitKat and that is it. And neither of them appeals to me.

Whenever I think of a McFlurry or a Sundae I dream about Terry’s Chocolate Orange and what I could make at home instead.

With the addition of our ice cream maker I have come up with a delicious twist of the Terry’s Chocolate Orange McFlurry and I think this is going to become a family favourite!

If you love a McDonalds McFlurry, then you will be pleased to know you can make many of the McFlurry’s at home with your favourite ice cream maker.

You can also use it as an opportunity to use up any spare Terry’s Chocolate orange that is in your house after Christmas or just when you fancy a chocolate orange ice cream binge.

The main ingredients for a Terry’s Chocolate Orange Ice Cream are simple and many of them are cheap to buy too.

Confession time. When I was buying the ingredients for Terry’s Chocolate Orange Ice Cream, Iceland had no little chocolate orange boxes left and all they had was one small bar.

But I decided to go ahead anyway.

Even though it was a small amount of chocolate we could still enjoy it.

BUT the Terry’s chocolate orange ice cream was so flavoursome. Therefore, if you don’t have much Terry’s that is fine too.

No, it does not. Our son Kyle has a bad nut allergy and we have always bought him Terry’s chocolate orange, as we know compared to many other chocolate bars, he has never had a reaction to it.

Though of course, do double check before you use it as they might have changed things over the years.

How To Make Chocolate Orange Ice Cream At Home?

If you like a McFlurry I recommend that you freeze your chocolate orange ice cream like one, rather than in a big tub.

If you see below, we bought some cute little ice cream tubs and made then loaded them into the freezer ready for when we wanted to eat them.

This idea is also perfect for parties or when the kids are having friends around after school.

One thing you need to be cautious of when making a chocolate and orange ice cream is the amount of orange that you load into the ice cream maker.

Too much and the chocolate orange ice cream will have an overpowering orange flavour and make you want to chuck it in the bin.

Too much orange juice and it will make your ice cream too runny and wont set properly.

I recommend a very slight amount of orange juice and to use orange rind for the main flavour. It helps correct the balance.

You can always taste test your chocolate orange ice cream just before it has finished churning and adjust with extra orange rind or extra orange juice or more chocolate if necessary. 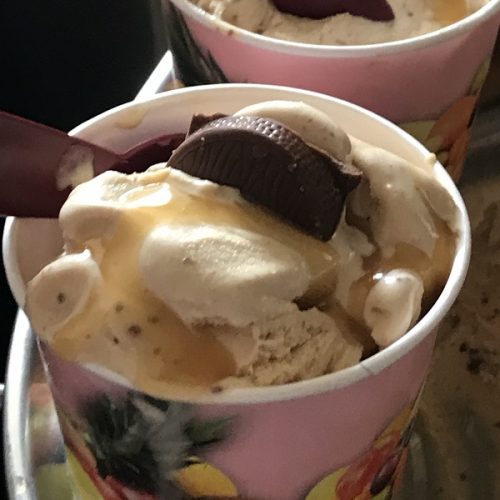 If you want your ice cream quicker, then I recommend 20 minutes in the freezer instead of 1 hour in the fridge. You can use any Terry’s chocolate orange in this recipe.

Calories: 283kcal | Carbohydrates: 27g | Protein: 4g | Fat: 17g | Saturated Fat: 10g | Cholesterol: 181mg | Sodium: 38mg | Potassium: 148mg | Fiber: 1g | Sugar: 25g | Vitamin A: 712IU | Vitamin C: 12mg | Calcium: 100mg | Iron: 1mg
Nutrition InfoPlease Note: Nutrition values are our best estimate based on the software we use at Recipe This and are meant as a guide. If you rely on them for your diet, use your preferred nutrition calculator.
Are We Friends On Pinterest?If we are not and you use Pinterest then follow us @RecipeThisBlog for more delicious recipes.
Fancy A Video?Subscribe to the Recipe This YouTube Channel for full length recipe videos. Don’t forget to click the bell icon to be notified when we upload a new video. Subscribe Here!
Copyright Notice© RecipeThis.com. ALL content including photos are copyright protected. Sharing of our recipes is both encouraged and appreciated via the social share buttons. Copying and/or pasting full recipes to any social media channel or onto your own website is strictly prohibited.