How to cook the most delicious slow cooker bacon ribs. An old fashioned alternative to traditional ribs, they are easy to dump in the slow cooker and then serve for supper.

These bacon ribs are cooked in a Chinese marinade and then finished with a sticky Chinese glaze. Perfect for your Saturday night Netflix marathon.

Confession time, I am so late to the bacon ribs party. Until someone asked me recently for a bacon rib recipe, I had never heard of them.

Then a few weeks later, I was at my local butchers and saw loads of bacon ribs in the window display and thought I MUST try bacon ribs and see what all the fuss is about.

I brought them home and my first thought was to see how they compared to the slow cooker Chinese pork ribs that I normally cook.

What if I could cook these bacon ribs in a similar marinade and then see how they compare in taste and texture.

Slow cooker bacon ribs went on and we all stood over the slow cooker after the marinade was added to see how they tasted.

Yet on texture bacon ribs just look like pork ribs.

What Are Bacon Ribs?

Bacon ribs are cut from the loin of the bacon. Hence why they taste just like regular bacon. But because bacon ribs come from the loin, they are very meaty and you often feel like you get more meat from bacon ribs than you do from pork ribs.

The best way to cook bacon ribs, is like any rib, and that is in the slow cooker. Whilst you can also make air fryer ribs or even ribs in the instant pot, the slow cooker has the best flavour and creates the most tender ribs.

You can also make bacon ribs in the slow cooker either with liquid or without and its easy to mix and match the flavours.

Do You Put Liquid In A Slow Cooker Of Ribs

Its totally optional if you add liquid to the slow cooker when cooking ribs.

The ribs have enough fat coming off them to stop them going dry when slow cooked.

But you may find with bacon ribs that they are very salty and if this happens it is better to cook the bacon ribs in liquid.

For example, you could follow our gammon routine as gammon is very salty and we have done gammon in fanta, gammon in cider, gammon in water and gammon in coke.

Then do these same liquids next time you cook bacon ribs in the slow cooker.

Can You Overcook Ribs In A Slow Cooker?

Yes, you can overcook ribs in the slow cooker. But you would have to cook them a long time for them to taste like they are overcooked.

I find that with 4 hours they are perfect, 6 hours they fall totally off the bone and anything above 7 hours on high is too much for them.

Ribs – We used one pack of bacon ribs that we chopped into ribs. You can use as much as will fit in your slow cooker or just make a smaller portion for one person.

Onions – To flavour the slow cooker we also added an onion. You can do the same and it can be any onion.

Then for the kitchen gadgets that we have used in this bacon ribs in slow cooker it has just been our Crockpot. We have this one and its wonderful for many types of slow cooker recipes and also great for easy fakeaways.

How To Cook Bacon Ribs?

And I am sure you can see why this recipe for bacon ribs in slow cooker is a true favourite of mine.

How Long To Cook Bacon Ribs In Slow Cooker?

The bacon ribs cooking time is JUST 4 hours on high or 7 hours on low. This will produce delicious bacon ribs that are almost falling off the bone and taste delicious and are perfectly tender.

You can also make bacon ribs and cabbage. Simply follow our instant pot cabbage or microwave cabbage recipe and serve it with these delicious bacon ribs.

Your recipe for bacon ribs is below, note you can print it out with or without photos, adjust servings, or click between metric and imperial depending on where you are in the world. 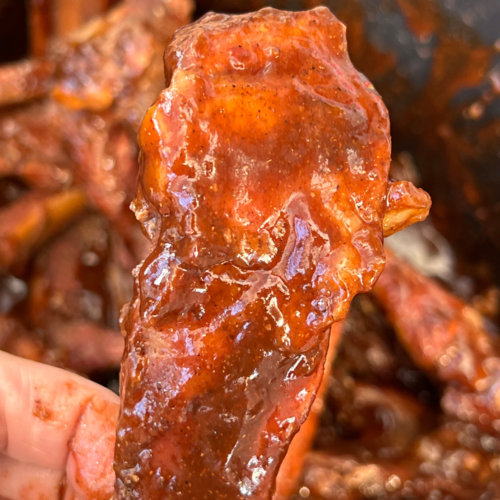 Size. Its better to chop up the bacon ribs first so that they will easily fit in the slow cooker and that its easy for them to be tossed in the marinade ingredients. Optional. If you want to you can load the bacon ribs into a Ziploc bag and marinade overnight but I don’t feel like they need it. Thanks for reading our recipe for bacon ribs on Recipe This. We have many more slow cooker recipes for you to check out next. Though if you would like more slow cooker old school recipes, do check out our slow cooker braising steak recipe next.

Calories: 1171kcal | Carbohydrates: 31g | Protein: 62g | Fat: 88g | Saturated Fat: 28g | Polyunsaturated Fat: 15g | Monounsaturated Fat: 32g | Trans Fat: 1g | Cholesterol: 300mg | Sodium: 1829mg | Potassium: 1171mg | Fiber: 1g | Sugar: 24g | Vitamin A: 21IU | Vitamin C: 6mg | Calcium: 111mg | Iron: 6mg
Nutrition InfoPlease Note: Nutrition values are our best estimate based on the software we use at Recipe This and are meant as a guide. If you rely on them for your diet, use your preferred nutrition calculator.
Are We Friends On Pinterest?If we are not and you use Pinterest then follow us @RecipeThisBlog for more delicious recipes.
Fancy A Video?Subscribe to the Recipe This YouTube Channel for full length recipe videos. Don’t forget to click the bell icon to be notified when we upload a new video. Subscribe Here!
Copyright Notice© RecipeThis.com. ALL content including photos are copyright protected. Sharing of our recipes is both encouraged and appreciated via the social share buttons. Copying and/or pasting full recipes to any social media channel or onto your own website is strictly prohibited.