How to make a slow cooker doner kebab fakeaway with just a few simple ingredients and your Crockpot.

You will love this homemade doner kebab recipe and it will become your go to for a nice supper in front of the TV.

My love for doner kebab goes back to my teens. Sat in front of the TV watching a movie on a Friday night and sharing a doner kebab and chips with my mum.

Usually there would be a good Goldie Hawn or Eddie Murphy movie on, and it was even better when eating a doner kebab at the same time.

But when I met my chef hubby, he said that he HATED doner kebabs because they smelt like sweaty feet and how could anybody ever eat them? He would then order a pizza or burger and I would then get a doner kebab from the takeaway.

Fast forward many years and I made a slow cooker doner kebab for the first time.

It was delicious and would you believe it the hubby loved my homemade doner kebab.

The doner kebab had the same texture as one from the takeaway with the usual extras and tasted so much better because it had quality lamb mince in it and there was no rubbish in it like it does at the takeaway.

Can You Make Homemade Kebabs In The Slow Cooker?

And because the homemade kebab meat is cooked slow in the slow cooker, it makes a much more tender cut of meat.

Yes, and no. I first learnt about the slow cooker doner kebab trick from someone that used to be on Slimming World. But I also know many people that love my slow cooker kebabs that have never been on SW or never even heard of it.

That is because our doner meat recipe contains only lean minced lamb and seasonings, making it oil free and easy to adapt to whichever diet you are on.

In fact, beyond a slimming world kebab, you can enjoy it on WW, paleo, keto, and many, many, others.

A doner kebab from the takeaway, is certainly NOT healthy. It’s a very cheap cut of lamb, mixed with other things, loaded with grease and full of rubbish.

However, make your own doner kebab fakeaway in the slow cooker and you have a healthy doner kebab.

Plus, its AMAZING how good the healthy homemade doner kebab tastes and we will also show you how to reduce the fat further.

Yes, our doner meat in the slow cooker is 100% gluten free. Because the ingredients that make up the doner meat is just lean minced lamb and dried seasonings.

Though if you want doner meat with all the trimmings, then you need to be looking for gluten free pitta breads to serve with the doner meat or go with a doner meat salad.

Mince – You will need a pack of lean minced lamb. We went with 800g and this made a good amount of doner meat that would feed the four of us for dinner. You can do less or more, but if changing the quantity, do increase/decrease the seasonings.

Seasonings – You will also need a variety of herbs and spices to make your lamb doner kebab including oregano, mixed herbs, cumin, garlic and onion powder, cayenne, sweet paprika and of course salt and pepper.

Foil – You will also need some foil to wrap your doner kebab in for when it cooks in the slow cooker.

Then for the kitchen gadgets that we have used in this doner kebab fakeaway recipe it has just been our Crockpot Slow Cooker. We have this one and its wonderful for many types of slow cooker recipes.

How To Make Doner Kebab?

And I am sure you can see why lamb doner kebab in the slow cooker is a true favourite of mine.

Why Do You Need Foil On A Slow Cooker Kebab?

Even with super lean minced lamb, you are still going to get some fat off the lamb. If you don’t wrap the lamb in foil you will be cooking the lamb in the fat and it wont stay in its perfect meatloaf shape.

Also, once cooked you can remove the foil wrapped doner meat, transfer it and then the majority of the fat then stays in the slow cooker.

The wrapping of the foil also helps stop the doner meat from going dry and produces a much better fakeaway kebab.

When you make a kebab its all about the delicious flavour that your doner kebab has. There are a LOT of herbs and spices used in a homemade doner meat recipe BUT apart there are similar quantities so its easy to prep.

For example, oregano, mixed herbs, cumin, garlic, and onion powder, and sweet paprika is all 1tbsp each.

Then you can add half a teaspoon of cayenne as well as salt and pepper.

Do you just want a doner meat recipe or are you looking for a fakeaway kebab salad too?

I prefer my slow cooker kebab to be paired with a kebab salad and have it just like I would if I ordered a kebab takeaway.

Whilst the slow cooker lamb kebab is on its last hour, I will prepare the fakeaway kebab salad.

I will shred lots of lettuce, slice up tomatoes, slice cucumber and then make a quick kebab dip. Which usually includes some of the cucumber and some garlic, mixed in with some Greek yoghurt.

Also, if you follow a gluten free lifestyle you can have this as a doner kebab salad or like our burger in a bowl and just leave out the pitta breads.

Your slow cooker lamb kebab recipe is below, note you can print it out with or without photos, adjust servings, or click between metric and imperial depending on where you are in the world. 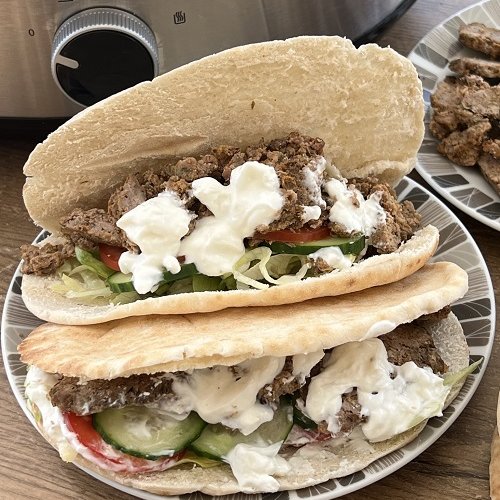 Calories: 709kcal | Carbohydrates: 37g | Protein: 42g | Fat: 44g | Saturated Fat: 20g | Polyunsaturated Fat: 3g | Monounsaturated Fat: 17g | Trans Fat: 3g | Cholesterol: 147mg | Sodium: 465mg | Potassium: 201mg | Fiber: 3g | Sugar: 1g | Vitamin A: 1020IU | Vitamin C: 1mg | Calcium: 137mg | Iron: 6mg
Nutrition InfoPlease Note: Nutrition values are our best estimate based on the software we use at Recipe This and are meant as a guide. If you rely on them for your diet, use your preferred nutrition calculator.
Are We Friends On Pinterest?If we are not and you use Pinterest then follow us @RecipeThisBlog for more delicious recipes.
Fancy A Video?Subscribe to the Recipe This YouTube Channel for full length recipe videos. Don’t forget to click the bell icon to be notified when we upload a new video. Subscribe Here!
Copyright Notice© RecipeThis.com. ALL content including photos are copyright protected. Sharing of our recipes is both encouraged and appreciated via the social share buttons. Copying and/or pasting full recipes to any social media channel or onto your own website is strictly prohibited.