Slow Cooker Stuffing For Turkey is an update of my best ever slow cooker stuffing recipe that I originally published on the blog back in 2016.

It was a case (like many other people) that I was way too lazy and it was just easier to turn to the packet stuff and not actually make it myself.

It was just easy. When you think that for packet stuffing that you just add water and a little bit of butter, mix it well and then you have stuffing ready to eat, you can see why I took the easy way out.

Though I am sure I am not alone, and that millions of people will be turning for the packet stuff each time they eat a turkey or chicken roast dinner.

Looking back, it tasted absolutely horrible compared to the real thing. So back in 2016 when we originally published our slow cooker stuffing for turkey recipe, I made my own homemade stuffing for the first time.

It was truly stunning and the best ever slow cooker stuffing. I have since tweaked it and made it even better and now I just can’t stop eating it.

Before Dominic would avoid the turkey stuffing saying that it wasn’t very nice from a packet and now, he is like me and tucking into it, wishing there was MORE.

When we had our slow cooker stuffing for turkey recently, there was lots leftover as we were cooking lots of other things and I turned into a teenager.

When I make my slow cooker stuffing cooking it with sausage is essential. It gives it that amazing, stuffing flavour and best of all you can choose the quality level of the sausage that you use.

Many of my mums’ friends buy the cheap sausage meat that is sold in the freezers of our local English supermarket.

This is the exact same sausage meat that they use to make homemade air fryer sausage rolls or scotch eggs.

Its easy to cook with and you can just dump it into the slow cooker. You can also use your favourite sausages and simply remove the skin from the sausage.

They have a better texture once cooked and give a wonderful flavour to your slow cooker stuffing.

The main reason why I started making my stuffing in the slow cooker is the ability to make ahead.

You can truly forget about your stuffing, make it ahead of everything else and then let it cook for you in the background.

When it is Christmas or Thanksgiving there is so many other sides that you want to focus on you can at least say that your stuffing is in the slow cooker and that you can forget about it.

Then when you want to cook your stuffing, throw the ingredients into your slow cooker and leave it to it.

Even better, you could turn the slow cooker off and it will keep warm for a couple of hours before serving.

When I make my slow cooker stuffing, I make it in the morning and let it cook on low ready for dinner later in the day.

Though if it is ready before it is time to eat, I feel like I am going through torture as I want to eat it straight away, as that smell drives me crazy.

How To Make Slow Cooker Stuffing?

Making slow cooker stuffing is so easy. Can I just say that we dump everything into the slow cooker and then wait until that lovely smell of stuffing takes over your kitchen?

As that to me is just how easy it is to make slow cooker stuffing for your turkey.

In the Milner house when we have roast dinner, Dominic cooks the meat and I make the sides. We make a wonderful team in the kitchen and thanks to the kitchen gadgets it all feels effortless.

Here are a few other side dishes that you can add to your next roast dinner to go with the slow cooker stuffing for turkey. 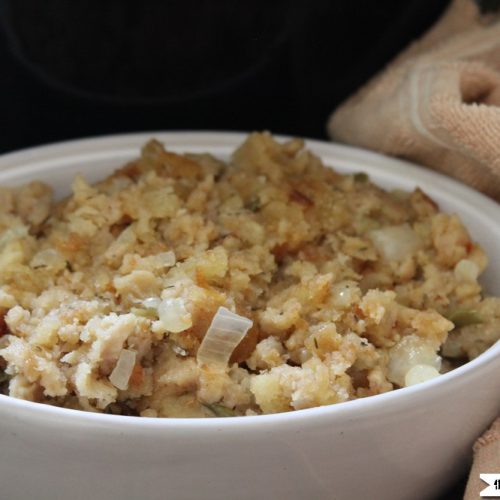 You can use any brand of sausage meat or sausages with the skin removed. It just depends which brand you prefer. You can use frozen leeks as they don’t have to be fresh. You also don’t need a lot of leek otherwise your stuffing will be overpowered by it. If your sausage meat is overly wet or sticky, then I recommend adding in a little breadcrumbs to help bind it all together.

Calories: 266kcal | Carbohydrates: 5g | Protein: 10g | Fat: 23g | Saturated Fat: 10g | Cholesterol: 61mg | Sodium: 462mg | Potassium: 184mg | Fiber: 1g | Sugar: 1g | Vitamin A: 380IU | Vitamin C: 3mg | Calcium: 26mg | Iron: 1mg
Nutrition InfoPlease Note: Nutrition values are our best estimate based on the software we use at Recipe This and are meant as a guide. If you rely on them for your diet, use your preferred nutrition calculator.
Are We Friends On Pinterest?If we are not and you use Pinterest then follow us @RecipeThisBlog for more delicious recipes.
Fancy A Video?Subscribe to the Recipe This YouTube Channel for full length recipe videos. Don’t forget to click the bell icon to be notified when we upload a new video. Subscribe Here!
Copyright Notice© RecipeThis.com. ALL content including photos are copyright protected. Sharing of our recipes is both encouraged and appreciated via the social share buttons. Copying and/or pasting full recipes to any social media channel or onto your own website is strictly prohibited.