If Christmas stresses you out and you want an easy plan b then let me show you how to make a simple roast turkey dinner in the slow cooker and air fryer.

Perfect for Christmas, Sunday roast dinners, Mother’s Day and so much more.

I love a turkey crown, because as a family of five it’s the perfect size for us, plus some leftovers for another day. Plus, it fits perfectly in the slow cooker without the need to turn the oven on.

If you want an easy way to cook turkey without ever worrying that the turkey will be dry, then slow cooker turkey crown is your new best friend.

That is because when you slow cook turkey, it makes it so much more tender and juicier compared to the old school oven method.

You can dump everything into the slow cooker and its like a stress free way to have a roast turkey dinner.

It is also perfect for Christmas, when you want a quick way of cooking everything without feeling like you are being dragged away from the fun.

Kind of think of this slow cooker turkey crown as spending the least time prepping in the kitchen and the most time eating the food.

Plus, as well as our free newsletter, we also have a free instant pot mini course. It is ideal for instant pot beginners or those that want to get more confident with their instant pot. The free course runs for 5 days with a new lesson delivered each day to your inbox.

Can You Cook A Turkey In A Slow Cooker?

Yes, you can. Turkey is delicious in a slow cooker and one of the best ways for cooking it, especially if you are not any good at cooking.

It amazes me how many people tell me that they cook turkey in the slow cooker because they don’t like/can’t cook and how it is their lifesaver.

But it needs mentioning, that you can only cook a turkey in the slow cooker if it fits and that is why a turkey crown is ideal.

Can You Cook A Turkey Crown In A Slow Cooker?

Yes, you can and it’s the most practical type of turkey to slow cook. As you will see from the picture below, a turkey crown perfectly fits in the slow cooker surrounded by vegetables and stuffing balls.

Yet, if you tried it with a whole turkey you would struggle to find one that fits.

This slow cooker turkey recipe is mainly for our UK readers. That is because turkey crown is not a thing elsewhere and some of you reading this, will be wondering what on earth I am talking about.

But it doesn’t mean you shouldn’t cook it if you are outside of the UK, just buy a bone in turkey breast instead.

Even better, you can make a slow cooker turkey crown in gravy. And not just any gravy, but a hidden veggies gravy.

I do this all the time and it makes a fantastic sauce for your turkey and you can save the leftovers for an instant pot turkey soup or to freeze for a stock for next time you have turkey.

What you do is grab your leftover vegetables that were under your turkey whilst cooking, add a couple of slices of your turkey once cooked, along with some of the stock and load it into a blender.

Then blend until smooth and you have an amazing gravy for serving with your turkey. No need to buy any turkey gravy granules and a great way to add some of your five a day to your dinner.

It follows the exact same principle of this turkey crown recipe, the only difference is you are cooking your turkey crown on low instead of on high.

Instead of putting your turkey crown on after breakfast to be ready for late afternoon, you are putting it on before bed and then its cooked when you wake up in the morning.

You can choose which you prefer, but I always go with the high temp because I can watch my turkey crown and not worry that it will be overcooked.

Never Do This When You Slow Cook A Turkey

One word of warning though is to NEVER EVER slow cook a turkey crown from frozen. It’s a very dangerous way to cook and should never be done.

That is because like chicken, it will not reach a high enough internal temperature to kill off the bad bacteria and can lead to serious food poisoning.

Roots – Let’s start with the root vegetables as they are the true hero of the gravy. I like to include onion, potato, celery, and carrot. But you can mix and match.

Turkey – Any turkey crown, or as you might call it a bone in turkey breast. I love a Bernard Matthews turkey crown, but its personal choice or whatever special deal you have found.

Sides – We are also cooking some extra sides in the air fryer and you can do the same or keep it simple with turkey crown, stuffing and gravy. The sides we did was sprouts and parsnips.

Then for the kitchen gadgets that we have used in this slow cooker turkey recipe, it has just been our Crockpot. We have this one and it does an amazing job and is also ideal for sauteing too. Plus, for the frozen sides we used this air fryer.

How To Cook A Turkey Crown In A Slow Cooker?

The slow cooker turkey crown cook time depends on whether you are going high or low:

You can do the same or mix and match it with some others. For example, you could also do: 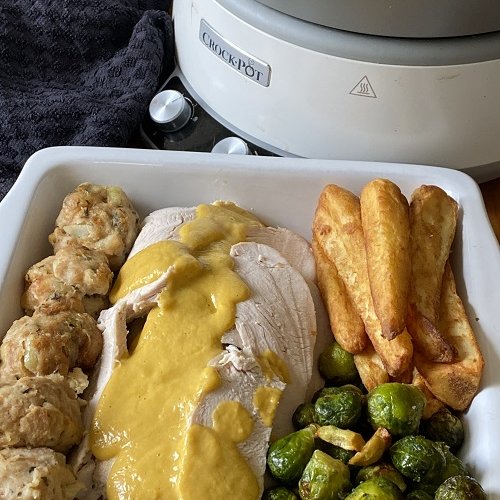 Ahead. You can also make your stuffing ahead of time and then leave in the fridge for later. Also, you can prep the turkey the night before and then put it on the next day when you are ready. Low. You can also cook a turkey crown on low and cook it overnight. Simply put it on low when you go to bed and turn it off when you wake up 8 hours later. Though, because you can’t add the stuffing balls halfway through, you can instead cook them in the air fryer. Thanks for reading our slow cooker turkey crown recipe on Recipe This. We have many more slow cooker recipes for you to check out next. Though if you would like more slow cooker roasting ideas, I recommend you try our slow cooker topside beef recipe next.

Calories: 282kcal | Carbohydrates: 42g | Protein: 7g | Fat: 11g | Saturated Fat: 2g | Polyunsaturated Fat: 3g | Monounsaturated Fat: 6g | Trans Fat: 1g | Cholesterol: 1mg | Sodium: 425mg | Potassium: 789mg | Fiber: 11g | Sugar: 9g | Vitamin A: 5965IU | Vitamin C: 72mg | Calcium: 135mg | Iron: 3mg
Nutrition InfoPlease Note: Nutrition values are our best estimate based on the software we use at Recipe This and are meant as a guide. If you rely on them for your diet, use your preferred nutrition calculator.
Are We Friends On Pinterest?If we are not and you use Pinterest then follow us @RecipeThisBlog for more delicious recipes.
Fancy A Video?Subscribe to the Recipe This YouTube Channel for full length recipe videos. Don’t forget to click the bell icon to be notified when we upload a new video. Subscribe Here!
Copyright Notice© RecipeThis.com. ALL content including photos are copyright protected. Sharing of our recipes is both encouraged and appreciated via the social share buttons. Copying and/or pasting full recipes to any social media channel or onto your own website is strictly prohibited.