Take a trip down memory lane to your favourite school dinners and make this classic steamed sponge pudding for dessert tonight.

What my kids love most, is when we are recipe testing some new desserts for you. Because many of the ingredients are often similar, we will often recipe test several desserts in one day.

Back in October that one day was instant pot strawberry cheesecake, instant pot banoffee pie and the day we made three different steamed sponge puddings in the instant pot.

One was of course this treacle sponge pudding, and the others were instant pot sticky toffee pudding and instant pot jam steamed pudding.

Of course, the best bit was all the tasting, and then reheating and enjoying all these yummy desserts over a few days.

Though a few months on, what stays in my memory is just how amazing the instant pot is for making great desserts easier.

That you can steam your desserts compared to how you would traditionally cook them and how grateful I am to have found the instant pot back in 2016 and found a new way of cooking.

Today’s recipe for treacle sponge pudding is the last of that fun filled day and we hope you enjoy this old fashioned British dessert as much as we have eating it!

Are You New To The Instant Pot?

Click here or on the banner above and you will have access to both in an instant.

What Is Treacle Sponge Pudding?

But what is confusing to many, is that there is no treacle in a treacle sponge pudding. Instead, treacle is replaced with golden syrup.

You can also transform it into maple syrup steamed pudding. All you would do is swap the golden syrup for maple syrup and then everything else is cooked the same way.

I have made the maple syrup version too but prefer the taste of golden syrup.

The idea is that you prep into steaming pudding bowls and then they are lowered into your pressure cooker with plenty of water and they steam under pressure. Though in the recipe card below, we will go into detail about this, so that it can be super easy for you.

Its much quicker and easier compared to the old school method of steamed puddings on the stovetop.

Plus, you are not limited to a treacle sponge as you can do any pressure cooker steamed puddings.

What Steam Pudding Bowl To Use?

I got some really good steam pudding bowls from my local Morrisons supermarket and fell in love with them.

Here is our steamed pudding bowl ready for its pudding mix:

Though these on Amazon look rather fantastic too and are a great price.

What you need to look for is steam pudding bowls that will last, so that you can make lots of steamed recipes in it, as well as fit well in the instant pot pressure cooker.

You can also get some smaller ones and made cute little individual steamed puddings too. Or do what we have done and made a big steamed sponge pudding for us all to share.

Would you like easy & amazing instant pot recipes from instant pot experts? Click here and join the Recipe This Newsletter. We will then send you the BEST instant pot beginner recipes direct to your email inbox along with other useful instant pot resources.

Syrup – The first ingredient to go into your steam pudding bowl is your golden syrup. I love to buy the squeezy bottles as it makes it so much easier for cooking with and you don’t have as much of a sticky mess in your kitchen.

Sugar – To make easy treacle sponge, you will need some caster sugar. It does the best job at making cakes or sponges and creates the perfect steamed sponge too. I always have a big bag of it in my kitchen cupboard.

Flour – And just like any sponge cake you will need some flour to combine it all together. But unlike many cakes such as our air fryer chocolate cake, only a small portion of flour is needed.

Eggs – You will also need 1 large egg at room temperature to beat into your batter. As well as a small portion of milk to make it creamy.

Butter – There is also a small quantity of butter required and again, much better if it is at room temperature, but of course not essential.

Then for the kitchen gadgets that we have used in this treacle steamed pudding recipe it has just been our Instant Pot. We have this one and it’s my favourite and great for desserts and so ridiculously fast for making a steamed pudding.

Plus, we recommend you head over to our instant pot recipes category as we have many electric pressure cooker recipes and have been using instant pots for 5 years.

How To Make Treacle Sponge?

And I am sure you can see now how simple and quick treacle steamed pudding is to make, especially if you use the instant pot to cook.

How Long To Cook A Steamed Pudding In A Pressure Cooker?

The ideal cook time for a steamed pudding in the pressure cooker is JUST 25 minutes. Even better, there is no natural pressure release required.

This means you can pressure cook your steamed pudding recipe and then do a quick pressure release.

There is also the time to pressure, but we speed this up by using boiling water in the instant pot.

Can You Reheat Treacle Sponge Pudding?

It doesn’t take long to reheat your steamed pudding and we did so in JUST 2.5 minutes in our microwave.

Interesting Instant Pot Trick – Use hot water from the tap when filling up the instant pot. If you don’t it will take forever to warm up all that water and take it to pressure.

Your treacle sponge pudding recipe is below, note you can print it out with or without photos, adjust servings, or click between metric and imperial depending on where you are in the world.

Though before you do, don’t forget to subscribe, and grab your FREE VIP Pass to Recipe This. You will get access to our latest recipes first, you will be able to request recipes, you will have access to free mini courses, free instant pot ebooks and useful instant pot cook time charts and so much more. 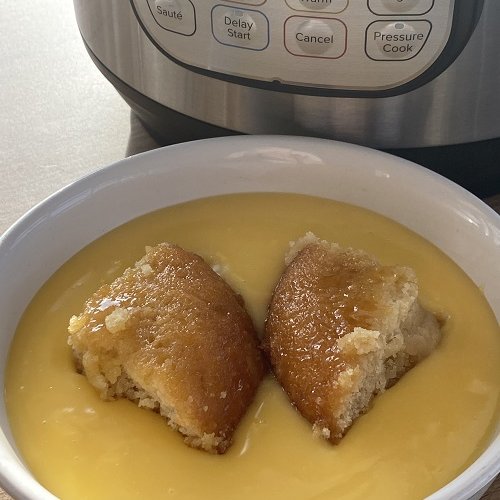 Resting. Once you have released pressure remove the foil and then load the bowl upside down into the container you plan to serve it in. No need to pat the top as it will naturally come out on its own in a perfect shape. Quantities. One recipe makes enough to half fill one pudding basin. Though this is still a big enough quantity to divide into four and feed four people. Double it and you can do two batches that would feed 8. Thanks for reading our instant pot treacle sponge pudding recipe on Recipe This. We have many more instant pot recipes for you to check out next. Though if you would like to see more desserts, I recommend you try our instant pot strawberry cheesecake next.

Calories: 326kcal | Carbohydrates: 48g | Protein: 5g | Fat: 13g | Saturated Fat: 8g | Polyunsaturated Fat: 1g | Monounsaturated Fat: 3g | Trans Fat: 1g | Cholesterol: 71mg | Sodium: 108mg | Potassium: 58mg | Fiber: 1g | Sugar: 27g | Vitamin A: 416IU | Calcium: 23mg | Iron: 1mg
Nutrition InfoPlease Note: Nutrition values are our best estimate based on the software we use at Recipe This and are meant as a guide. If you rely on them for your diet, use your preferred nutrition calculator.
Have You Tried The Instant Pot Mini Course?Its FREE and its delivered by email over 5 days. Ideal for beginners to the instant pot Click Here.
Are We Friends On Pinterest?If we are not and you use Pinterest then follow us @RecipeThisBlog for more delicious recipes.
Fancy A Video?Subscribe to the Recipe This YouTube Channel for full length recipe videos. Don’t forget to click the bell icon to be notified when we upload a new video. Subscribe Here!
Copyright Notice© RecipeThis.com. ALL content including photos are copyright protected. Sharing of our recipes is both encouraged and appreciated via the social share buttons. Copying and/or pasting full recipes to any social media channel or onto your own website is strictly prohibited.

Leave a Reply to Recipe This Cancel reply