Instant Pot Spanish Quinoa. How to make a Spanish quinoa in the instant pot. Similar flavours to a classic paella with chorizo, peas, red peppers, saffron, turmeric and paprika. An easy to make one pot Mediterranean lunch in the instant pot.

I am a HUGE paella fan and can’t go a summer without going out for a paella lunch with the kids.

Paella is my number #1 favourite food and have also published a recipe for instant pot paella.

But I limit having a paella to once a year because I have a gluten intolerance and if I ate it regularly, I would end up poorly.

When I was gifted some quinoa, I said to my eldest son Kyle who loves paella rice, we must make an instant pot Spanish quinoa.

It would be inspired by our love for paella and the Spanish and Portuguese rice side dishes that we often have when we are out for dinner.

Because supplies were running low instant pot Spanish quinoa would be our last and the one, we were the most excited about trying.

Both myself and Kyle stood over the instant pot, as it released pressure, smelling the aroma and getting excited with our fork at trying this instant pot Spanish quinoa for the first time, and let me tell you now it didn’t disappoint.

In fact, out of three variations of flavoured quinoa this Spanish rice style version was the BEST.

Well a classic paella will either be loaded with seafood such as clams, mussels and prawns.

Or it will be the chicken version with delicious chunks of boneless and skinless chicken thighs.

But Spanish rice is everything but the chicken and seafood. It is the fragrant rice.

It is the colourful rice because of the saffron and the turmeric. It’s a delicious flavour of the Mediterranean.

With our instant pot Spanish quinoa, it is a gluten free version of the Spanish rice.

An even healthier option and perfect for if you follow a gluten free lifestyle or are on Slimming World or Weight Watchers.

One of my favourite ingredients in paella is chorizo. It is used in a lot of Spanish and Portuguese dishes and I always find it odd to eat out in Portugal and not have any chorizo.

When I am making a quinoa inspired paella, I will throw the diced chorizo in last and then give it a shake before serving.

Chorizo is ready to eat and pressure cooking it will make it like rubber.

Plus, if you are feeding a vegetarian or vegan, you can serve theirs first before adding in the chorizo.

How To Make Spanish Quinoa In The Instant Pot?

Cooking Spanish quinoa in the instant pot is so EASY it will be on your weekly meal plan on a regular basis. You can have it as your main one pot meal or serve it with seafood or chicken or both.

Here is how to cook Spanish quinoa:

The ingredients in instant pot Spanish quinoa are simple and at the time of making this dish, I had every item in my pantry.

Though I am now out of saffron and need to restock!

The best vegetable stock I ever used on a paella; was the cartons you can buy in Spain.

The ones outside of Spain are never the same, but this vegetable stock is the closest I have found as a backup.

My Instant Pot Quinoa Is Sticking?

You need a layer of oil in your instant pot to stop the quinoa from sticking to the instant pot.

The most well known way of doing this is to rub coconut oil in the bottom and sides of your instant pot.

However, when you make instant pot Spanish quinoa you don’t need to do this.

That is because sautéing the peppers first with extra virgin olive oil will create a layer of oil and make it non-stick for you. 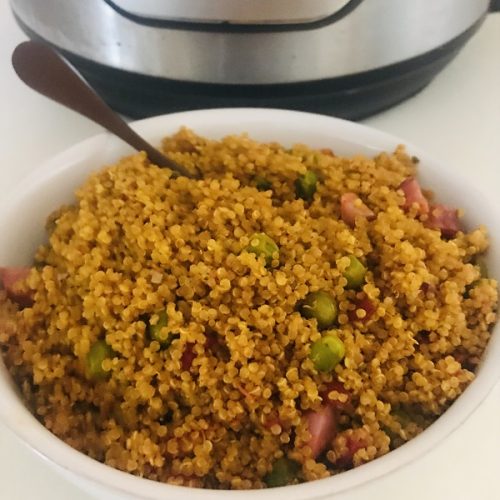 You can swap frozen peas for canned. But if using cans please drain before cooking.
If you can get a paella flavoured stock, do so as it will make it taste even better. You can use either red peppers or a mix of any bell peppers. I used ½ a red pepper and ½ a yellow pepper.

Calories: 251kcal | Carbohydrates: 37g | Protein: 10g | Fat: 7g | Saturated Fat: 2g | Cholesterol: 7mg | Sodium: 393mg | Potassium: 462mg | Fiber: 6g | Sugar: 4g | Vitamin A: 1941IU | Vitamin C: 54mg | Calcium: 35mg | Iron: 3mg
Nutrition InfoPlease Note: Nutrition values are our best estimate based on the software we use at Recipe This and are meant as a guide. If you rely on them for your diet, use your preferred nutrition calculator.
Are We Friends On Pinterest?If we are not and you use Pinterest then follow us @RecipeThisBlog for more delicious recipes.
Fancy A Video?Subscribe to the Recipe This YouTube Channel for full length recipe videos. Don’t forget to click the bell icon to be notified when we upload a new video. Subscribe Here!
Copyright Notice© RecipeThis.com. ALL content including photos are copyright protected. Sharing of our recipes is both encouraged and appreciated via the social share buttons. Copying and/or pasting full recipes to any social media channel or onto your own website is strictly prohibited.