Slow Cooker Leek & Potato Soup. How to make potato and leek soup in the slow cooker. Easy to prep, delicious tasting and best of all creamy without cream.

Yes, you read that right this slow cooker creamy soup recipe is cooked without ANY cream.

Leek And Soup Without Cream

I had been making my own soups for a number of years, before I realised that most soup recipes online and in recipe cookbooks call for cream.

Until this point, I had never added cream to my soup.

In fact, the only time I ever bought cream was when I was using it to make a dessert and it was rarely in my fridge.

Beyond the ice cream maker recipes on Recipe This, very few recipes out of 1100+ contain any cream and I like it that way.

My secret ingredient in a lot of creamy sauces is potatoes, butternut squash, or carrots. Either one of these ingredients will make a meal super creamy once blended.

Therefore, if you want to create a creamy soup without actual cream, this is where you start.

That is also why you can make a creamy potato and leek soup without cream.

What Do You Call Your Leek & Potato Soup?

Mention in the comments at the bottom of the recipe what you call it, as I am always interested which way around you phrase it.

Personally, I always say leek first and then potato second!

Yes, it is. There are no unhealthy ingredients in your leek and potato soup. It is made up of vegetable and potato goodness, alongside vegetable stock and seasoning.

You can also freeze it for later and then it can be your healthy cream of everything soup. Then use it for those times that a recipe calls for a cream soup in the ingredients list.

Can You Make A Fat Free Leek & Potato Soup?

If you are on a diet and looking for a low fat leek and potato soup then we have got you covered.

That is because it’s very easy to make a leek and potato soup low fat. You are using two main ingredients (leek and potatoes) and mixing them up with seasonings and vegetable stock.

If you are looking for leek and potato soup on Slimming World then even better, because you can keep it syn free.

What Is In Leek & Potato Soup?

Leeks – I recommend just two large leeks in a leek and potato soup. It will then give a wonderful flavour from the leeks without been overtaken with the potato flavour.

Potatoes – I love a fridge or a pantry clear out. When we made this potato and leek soup recipe, it was a great way to use lots of potatoes. You can also use any potatoes, but if they are overly starchy, soak them in cold water for an hour first.

Stock – You can also use any vegetable stock in the slow cooker. You can use shop bought, one you previously made, or flavour some water.

Seasoning – There is nothing worse than bland boring leek and potato soup in the slow cooker. I recommend thyme, parsley, and oregano. Either one of these or all. Along with salt, pepper, and garlic. You can also add extra seasoning at the end if it doesn’t taste like it has enough flavour.

Then for the kitchen gadgets that we have used in this leek and potato soup recipe in the slow cooker, it has just been our Crockpot. We have this one and it does an amazing job and is also ideal for sauteing on the stovetop first.

How To Make Potato & Leek Soup In Slow Cooker?

The easiest way to thicken leek and potato soup, is to add extra potato. The potato is what thickens the soup and makes it creamy and thick.

I recommend you drain the soup if you are worried its not going to be thick enough and then gradually add the liquid back in as you hand blend.

What To Serve With Leek & Potato Soup?

When we made this leek and potato soup recipe in our slow cooker, we were in the middle of an Aldi challenge.

We were challenging ourselves to eat just Aldi produce for a month and made the soup with just Aldi ingredients.

But what we had also picked up at Aldi was some 75% off sliced bread and served our soup with this.

I LOVE a delicious creamy soup and beyond a homemade leek and potato soup in the slow cooker, here are a few other ideas: 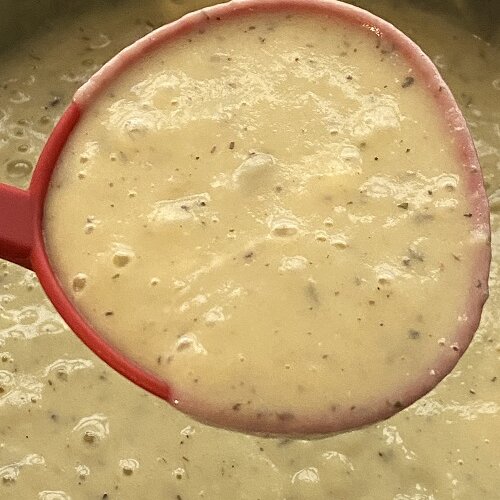 Calories: 288kcal | Carbohydrates: 54g | Protein: 6g | Fat: 6g | Saturated Fat: 4g | Polyunsaturated Fat: 1g | Monounsaturated Fat: 1g | Trans Fat: 1g | Cholesterol: 15mg | Sodium: 826mg | Potassium: 1166mg | Fiber: 7g | Sugar: 5g | Vitamin A: 1512IU | Vitamin C: 59mg | Calcium: 91mg | Iron: 4mg
Nutrition InfoPlease Note: Nutrition values are our best estimate based on the software we use at Recipe This and are meant as a guide. If you rely on them for your diet, use your preferred nutrition calculator.
Are We Friends On Pinterest?If we are not and you use Pinterest then follow us @RecipeThisBlog for more delicious recipes.
Fancy A Video?Subscribe to the Recipe This YouTube Channel for full length recipe videos. Don’t forget to click the bell icon to be notified when we upload a new video. Subscribe Here!
Copyright Notice© RecipeThis.com. ALL content including photos are copyright protected. Sharing of our recipes is both encouraged and appreciated via the social share buttons. Copying and/or pasting full recipes to any social media channel or onto your own website is strictly prohibited.