Beer Cheese Soup. A delicious, creamy, healthier version of the German classic beer and cheddar cheese soup. Made without flour and without butter, loaded with hidden veggies, this is one of the easiest soups you can make at home in your soup machine.

As a child I was surrounded by great beer. My Grandad was the area manager of a beer factory and was making sure that the best of the best beer was being produced. My school bag in my early teens would be the brand of a beer that he had free samples of in his factory for me

Then, I also got the chance to visit some amazing classic beer factories and beer museums as a kid.

It was wonderful to see what beer was like then and what is has transformed into over the years.
What is wonderful about beer, is that beyond drinking it, beer is fantastic for cooking with. You can use beer, (or ale as you might call it ale) in a variety of great recipes.

I love beef and ale pie, beef stew with Guinness and another great use of it, is to make a warming bowl of beer cheese soup.

Today’s recipe is all about a simple way to make beer soup in the soup maker. That you can make with any of your favourite beers, though the German beer is the best.

What Is Beer Cheese Soup?

Beer cheese soup is a soup that is made with beer, cheese and either contains a roux as a base, or potatoes as its thickener.

It is a creamy soup and is often associated with Oktoberfest which is the German beer festival that happens in Germany every October. Because people around the world love the festival so much, many households make a batch of beer and cheese soup to join in the traditions.

Is There Alcohol In Beer Cheese Soup?

Yes, there is. But when beer cooks, the alcohol volume is stripped out of it. Just like brandy is when you make a brandy sauce for your steak.

Making it suitable for serving to kids.

The best beer for your beer cheese soup recipe is to choose a German beer. They make the best beers, and the German beer has a lovely flavour to it.

I used a bottle of German beer that I picked up from my local supermarket and you can do the same. Then the beer becomes your stock in your beer soup.

It also creates more of an authentic beer soup.

A proper English cheddar cheese is the best cheese for your beer cheese soup. Forget the cheap grated cheese, use real cheddar cheese.

As a backup plan you can swap cheddar cheese for another quality English cheese such as double Gloucester, Wensleydale, or red Leicester.

I am sure you want to know what is beer cheese soup made of? And how is it healthy?

Well, we have made a few simple swaps in our beer cheese soup recipe to make it healthier.

In an authentic beer cheese soup, it would involve making a roux first. This would be done by melting butter, adding flour, and adding milk to make a simple white sauce.

Instead, we are swapping the traditional roux for sweet potato. The sweet potato will then create the creaminess in your cheese soup.

As well as adding in onion, celery, and yellow pepper.

Beer – We recommend a good quality German beer. When you make beer cheddar cheese soup, the beer becomes the majority of the stock, and you want a nice flavour.

Cheese – Some good quality cheddar cheese makes all the difference and is delicious. It is also nice to have some extra for grating on top of your soup before serving.

Veggies – I recommend onion, peppers, celery, and sweet potato in this soup. The sweet potato is an important part as it stops the soup from being watery and gives it a lovely creamy base.

Vegetable Stock – Even though I get the bulk of my stock from the beer, it is nice to mix it up with some vegetable stock too. Though you will need 1/3 of what you would normally use in a soup maker soup.

Seasoning – I recommend keeping it simple with some salt, pepper, and parsley. The hero of your soup is your cheddar cheese and your beer and you don’t want strong flavours to take away from this.

Then for the kitchen gadgets that we have used in this beer cheese soup recipe, it has just been our Ninja Soup Maker. We have this one and its wonderful for simple homemade soups that you can make in a flash.

How To Make Beer Cheese Soup?

How Long Is Beer Cheese Soup Good For?

Beer cheese soup is good in your fridge for up to 4 days. Though because it’s a dump and start soup maker recipe, I always make it as I am eating it.

Another idea is if you have a bit left, you can freeze it and use it as a beer flavoured cheese sauce for another recipe such as a one pot casserole.

What To Serve With Your Easy Beer Cheese Soup?

Yesterday on the blog, we shared with you how to make bread machine beer bread. I can not think of anything that would be better suited to serve with your simple beer cheese soup.

Or another idea is to make our air fryer croutons and load croutons on top of your beer soup. 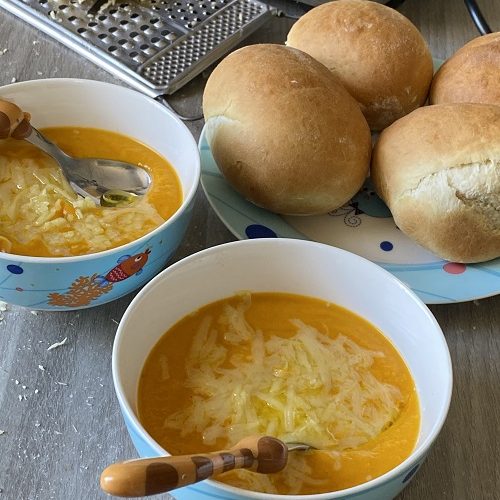 Beer Cheese Soup. A delicious, creamy, healthier version of the German classic beer and cheddar cheese soup. Made without flour and without butter, loaded with hidden veggies, this is one of the easiest soups you can make at home in your soup machine.
Prep Time5 mins
Cook Time30 mins
Total Time35 mins
Course: Soup
Cuisine: Soup Maker
Servings: 4
Calories: 241kcal
Author: RecipeThis.com

Calories: 241kcal | Carbohydrates: 18g | Protein: 11g | Fat: 13g | Saturated Fat: 8g | Polyunsaturated Fat: 1g | Monounsaturated Fat: 4g | Cholesterol: 39mg | Sodium: 384mg | Potassium: 370mg | Fiber: 3g | Sugar: 4g | Vitamin A: 8649IU | Vitamin C: 33mg | Calcium: 307mg | Iron: 1mg
Nutrition InfoPlease Note: Nutrition values are our best estimate based on the software we use at Recipe This and are meant as a guide. If you rely on them for your diet, use your preferred nutrition calculator.
Are We Friends On Pinterest?If we are not and you use Pinterest then follow us @RecipeThisBlog for more delicious recipes.
Fancy A Video?Subscribe to the Recipe This YouTube Channel for full length recipe videos. Don’t forget to click the bell icon to be notified when we upload a new video. Subscribe Here!
Copyright Notice© RecipeThis.com. ALL content including photos are copyright protected. Sharing of our recipes is both encouraged and appreciated via the social share buttons. Copying and/or pasting full recipes to any social media channel or onto your own website is strictly prohibited.