Even better, you can freeze your potato and leek soup leftovers for another day or use the Thermomix to reheat this creamy potato soup.

First thing is first, do you call this Thermomix leek and potato soup or Thermomix potato and leek soup? Do tell all in the comments as I find it so interesting how the same recipe has two different names.

I must admit I would name it Thermomix leek and potato soup and our youngest child Jorge would just call it mummy’s yummy potato soup.

In fact, he loves my potato soup so much that he would eat it every mealtime and will always go back for 2nds and 3rds until he reaches his carb coma.

Which is funny, because its only with a handful of his favourite meals that he would go back that many times, as for a child he is not greedy.

But just like Jorge, I do love leek and potato soup because it is so creamy from the potatoes and is fantastic for when you have leftover potatoes that need using up and to avoid wasting them you can load into the Thermomix for a quick creamy soup.

Today’s Thermomix leek and potato soup takes all my favourite soup ingredients together to make one yummy soup. You have the potatoes for creaminess, leeks for hidden veggie, along with plenty of garlic and onion and veggie stock.

Would you like easy & amazing Thermomix recipes from everyday Thermomix users? Click here and join the Recipe This Newsletter. We will then send you the BEST TM beginner recipes direct to your email inbox along with other useful kitchen gadget resources.

What Kind Of Potatoes For Leek Soup?

I only ever make Thermo potato and leek soup when I have loads of spare potatoes that need using up.

As my clear out the potatoes and avoid food waste challenge happens.

I then load usually up to 800g of potatoes into the Thermomix and make soup.

If you think of your potatoes the same way when making a leek and potato soup. Don’t think that you must use premium potatoes, as you don’t need to as any clean potatoes with bruises removed will be perfect.

Can You Make Potato Leek Soup Ahead Of Time?

Yes, you can make ahead potato and leek soup and its just as delicious. You could make this creamy soup in the Thermomix and then load it into containers and even freeze it and reheat from frozen.

You could also make the potato and leek soup earlier in the day, leave it in the Thermomix and reheat using the Thermomix when you are ready to eat dinner.

For a thick leek and potato soup recipe or to thicken it, simply add more potatoes.

Potatoes are the best natural thickener and I often use leftover mashed potatoes in stews and casseroles in the slow cooker to thicken them up.

Another main reason for a soup not been thick is too much stock has been added and its too watery, so keep an eye on the liquid total you have added.

Potato Leek Soup With A Twist

I love to add in fun ingredients into my soups to give them a better taste and to make the soup process easier.

My potato leek soup with a twist involves adding in some Allioli. It’s a fantastic garlic mayonnaise from Spain and gives a wonderful garlic and creamy texture to your soup.

I also add in Philadelphia cream cheese as an alternative to cream. So, if you are looking for a creamy leek and potato soup recipe without cream, then you will love the ingredients list.

As I write this, the Thermomix is my latest kitchen gadget. It joins my air fryer, instant pot pressure cooker, slow cooker, pie maker, and soup maker, plus many others and I am looking forward to seeing how the Thermomix makes cooking even easier.

For fun I am sharing with you behind the scenes Thermomix recipes of the first 30 things I made with my new kitchen toy.

That way you can see if the Thermomix is for you and if these recipes will fit in what you like to make.

It’s simple – If you have not made a homemade soup before and want a simple one, then you will love leek and potato soup.

Leftovers – We often buy more potatoes than we need, and a potato soup is a great way to clear out your potatoes and start over. You can also freeze the leftovers for another day.

But most importantly, would I recommend making leek potato soup in the Thermomix? Yes, I would. I would highly recommend that every Thermomix user tries making soup as its amazing and such a time saver. Plus, you can also use the Thermomix to reheat your leftover soup too!

Are You New To The Thermomix?

Would you like to join me in my journey as I discover great things to make using my Thermomix? You will get access to our weekly newsletter, where we share all our latest kitchen gadget tips as well as everything Thermomix.

Potatoes – When I am making potato soup I always go with as many will fit in the soup maker. In this case I found that 800g of potatoes took the Thermomix to just below the max line.

Leeks – You can add just 1 leek or take it up to 3 leeks depending on how much you love leeks.

Garlic & Onion – I love garlic and onion in most of my soups. They give a fantastic starting flavour and prep fast in the Thermomix.

Butter – Rather than oil to make a classic recipe for potato and leek soup I would recommend using butter instead. But we don’t eat that much better so are subbing it for Light I Can’t Believe Its Not Butter.

Seasoning – Then soup is not the same without its seasonings. I recommend salt, pepper, parsley, and thyme.

Extras – Then for potato and leek soup with a twist I am adding in Allioli (Spanish garlic mayo) and Philadelphia cream cheese.

Then for the kitchen gadgets that we have used in this Potato And Leek Soup Thermomix recipe it has just been our TM6 and its wonderful for many types of soups.

How To Make Leek & Potato Soup In Thermomix?

And I am sure you can see now how easy it is to make this leek and potato soup Thermomix recipe and how you can do the same in your kitchen.

What To Do With Leftover Potato Leek Soup?

If you have leftover potato and leek soup, save it as a sauce for everything.

Potato and leek soup is perfectly creamy and can be mixed in with some pasta and some cheese and you have a leftover mac and cheese.

You can also use it as a stock for a slow cooker or instant pot recipe.

Can You Freeze Leek & Potato Soup?

Simply load it into a freezer container once cold, then label it so you know what it is, and then you can defrost it when you want to eat it again.

What Thermomix Settings Do You Use?

The easiest way to do the potato and leek soup recipe in your Thermomix is to use the manual settings.

The manual setting is perfect for mixing and cooking at the same time. You can be setting the temperature, the time, and the speed all on one screen. Then it will beep when it is done.

For example, when we were cooking the leek potato soup we used speed 2 for 20 minutes on 100c.

Your potato leek soup thermomix recipe is below, note you can print it out with or without photos, adjust servings, or click between metric and imperial depending on where you are in the world. 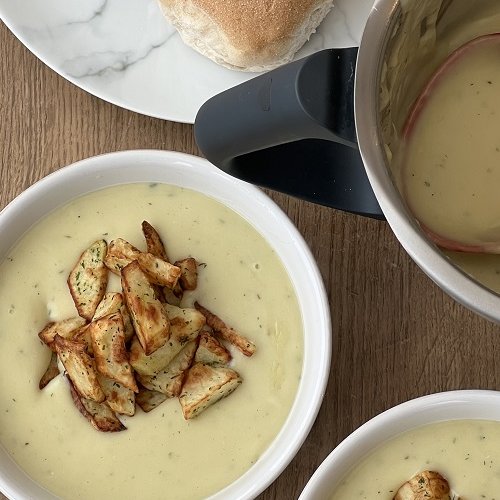 Creamy. The secret to our super creamy soup without cream is Allioli which is a Spanish garlic mayonnaise and Philadelphia cream cheese. Plus, potatoes make a soup extra creamy. Stock. I make ahead a big batch of instant pot veggie stock and make them into giant ice cubes. Then I can use them in soup recipes, stews etc and they reheat perfectly in the Thermomix. And the stock quantity should be just enough to cover the potatoes. Potatoes. I don’t have a weight in mind when I make a potato soup and just usually add to the max line. I weighed them as I added them, and it came in at 800g. Splatter. Add the splatter guard when cooking this soup as it splashes a lot and is very hot. Leeks. Make sure you clean the leeks before placing in the Thermomix. Leeks carry a lot of grit and can really ruin the soup if not cleaned. Serving. I also saved a few potatoes and air fried them in a similar way to our air fryer sweet potato cubes. They are delicious for serving over your potato soup with some bread rolls. Thanks for reading our potato leek soup Thermomix recipe on Recipe This. We have many more Thermomix recipes for you to check out next. Though if you would like to try more soup recipes, do check out our Thermomix pumpkin soup.

Calories: 259kcal | Carbohydrates: 45g | Protein: 5g | Fat: 7g | Saturated Fat: 4g | Polyunsaturated Fat: 0.4g | Monounsaturated Fat: 1g | Trans Fat: 0.1g | Cholesterol: 16mg | Sodium: 841mg | Potassium: 948mg | Fiber: 5g | Sugar: 5g | Vitamin A: 1009IU | Vitamin C: 46mg | Calcium: 60mg | Iron: 2mg
Nutrition InfoPlease Note: Nutrition values are our best estimate based on the software we use at Recipe This and are meant as a guide. If you rely on them for your diet, use your preferred nutrition calculator.
Are We Friends On Pinterest?If we are not and you use Pinterest then follow us @RecipeThisBlog for more delicious recipes.
Fancy A Video?Subscribe to the Recipe This YouTube Channel for full length recipe videos. Don’t forget to click the bell icon to be notified when we upload a new video. Subscribe Here!
Copyright Notice© RecipeThis.com. ALL content including photos are copyright protected. Sharing of our recipes is both encouraged and appreciated via the social share buttons. Copying and/or pasting full recipes to any social media channel or onto your own website is strictly prohibited.