Our creamy pumpkin soup in the Soup Maker is an update of our first ever soup maker recipe that we featured back in 2015. We hope you enjoy our updated version.

Would you believe that growing up, I never even remember trying pumpkin and it wasn’t until I moved to Portugal that I bought a pumpkin and fell in love with the delicious taste of the winter vegetable.

My upbringing is probably responsible for this. My mum is a Halloween baby and because she is always getting ready for a party, the usual Halloween traditions that kids do have never been a big thing.

Then add to this the fact that I grew up in the UK where they really didn’t do Halloween and pumpkins and the whole thing had passed me by.

Back in 2015 when I originally posted our Soup Maker Pumpkin Soup, I had just enjoyed the first Halloween with my beautiful daughter Sofia.

It was less than 4 weeks before her first birthday and I was really looking forward to introducing her to the world of pumpkins.

That introduction was this creamy pumpkin and garlic soup. She got excited as the pumpkin was chopped up and it was loaded into the soup maker for her lunch and dinner that day.

Since then we make pumpkin soup all the time and love the fact that you can get pumpkin most of the year here in Portugal. We also cook pumpkin in a lot of other dishes but that is of course for another day.

Today I want to share with you why pumpkin is the favourite vegetable by choice for the Portuguese and why they cook pumpkin soup daily.

What I love in Portugal is how healthy they are. You don’t see a big obesity problem like you do in other countries and OAP’s are often fitter than 30 something British people.

You see the Portuguese 80 something take their dogs out for long walks at least twice a day and eat a lot of pumpkin soup.

The pumpkin soup will often be on the menu for lunch and they will have it with warm Portuguese bread. Pumpkin will always be the base of the soup and then other ingredients will be added in.

The soup my next door neighbour cooks is pumpkin soup with carrots and kale and always looks and smells delicious.

She has pumpkins lined up in her outbuilding ready for her next soup session and chops a wedge of pumpkin off each lunch time.

It was watching my neighbour and her love for pumpkin soup that originally inspired me to make Soup Maker Pumpkin Soup!

My second inspiration for making this soup maker pumpkin soup is to create a delicious Slimming World pumpkin soup.

As our readership has grown for the soup maker, we have found that 80% of those that read our soup maker recipes are on Slimming World.

Therefore, we wanted to make our soup maker pumpkin soup suitable for our Slimming World readers.

I am a previous target member of Slimming World and even though my book is now a little out of date, I understand how a soup maker is perfect for the Slimming World diet.

Though do check with your consultant because my book is not the current one and I don’t work for Slimming World.

I understand that we don’t all have the same soup maker and that size matters when it comes to making pumpkin soup in the soup maker.

The first soup maker I had was similar to the Cuisinart and it is a LOT BIGGER than the Morphy Richards Soup Maker and will hold a lot more soup.

Many people have different sized soup makers, and this can be a problem when following soup maker recipes online as not everyone has the same one.

This recipe today for pumpkin soup in the soup maker is based on using the Morphy Richards. If you are using a bigger soup maker, then note you can double the ingredients for a bigger soup.

How To Make Pumpkin Soup In The Soup Maker?

It is so, so easy to make pumpkin soup in the soup maker. You dice and throw your ingredients in and let the soup maker do the work for you.

It is also updated quarterly with new and exciting soup maker recipes.

You will find that our creamy pumpkin soup is one of the popular ones that our readers go back to time and time again. 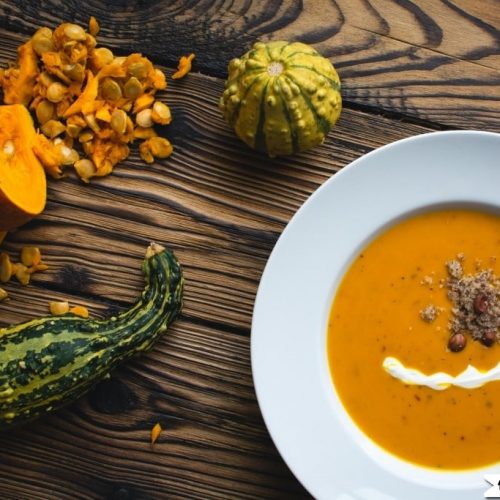 The weight of the pumpkin for our pumpkin soup is after it was peeled and cubed and was ready to go into the soup maker.
I recommend adding in a creamer at the end to give your pumpkin soup the wow factor. You can use anything that goes well with a soup such as Greek yoghurt, coconut milk, quark or fromage frais. If you want to keep our soup maker pumpkin soup syn free then I recommend using quark in your soup rather than coconut milk. Some soup makers have terrible blenders, if this is yours then a hand blender is also great for blending the soup.

Calories: 39kcal | Carbohydrates: 7g | Protein: 1g | Fat: 1g | Saturated Fat: 1g | Sodium: 3mg | Potassium: 98mg | Fiber: 1g | Sugar: 3g | Vitamin C: 5mg | Calcium: 26mg | Iron: 1mg
Nutrition InfoPlease Note: Nutrition values are our best estimate based on the software we use at Recipe This and are meant as a guide. If you rely on them for your diet, use your preferred nutrition calculator.
Are We Friends On Pinterest?If we are not and you use Pinterest then follow us @RecipeThisBlog for more delicious recipes.
Fancy A Video?Subscribe to the Recipe This YouTube Channel for full length recipe videos. Don’t forget to click the bell icon to be notified when we upload a new video. Subscribe Here!
Copyright Notice© RecipeThis.com. ALL content including photos are copyright protected. Sharing of our recipes is both encouraged and appreciated via the social share buttons. Copying and/or pasting full recipes to any social media channel or onto your own website is strictly prohibited.