Slow Cooker Mince Pasta Bake. Let me introduce to you one of the best, most delicious, hidden veggie loaded, mince pasta bake recipes. Loaded with seasonal vegetables, minced beef, pasta, and plenty of cheese this is a weeknight meal come true in the slow cooker.

Even better, this makes a large portion, leaving plenty of leftovers for another day that you can reheat in your slow cooker.

I had a bad reminder recently about cooking before I fell in love with my kitchen gadgets. A time before I cooked all the time with my instant pot, slow cooker, soup maker and air fryer. A time when you had lots of pots and pans when you cooked dinner and food was not as quick to cook as it is today.

It was from one of my readers.

She had looked in Google for a recipe for mince pasta bake.

The recipe she found told her to:

By the time she had finished she would have had loads of washing up. Plus, as she mentioned she wanted a mince beef pasta bake recipe that was loaded with hidden veggies, because her hubby was so fussy about his vegetables.

A few days later, I had the slow cooker out, was making a slow cooker mince pasta bake and giving her an advance copy of the recipe before it was published for her to try herself.

It was a HUGE hit, and the hubby didn’t realise it was loaded with veggies. And her washing up was limited to the slow cooker, and utensils for prepping the ingredients. Plus, she didn’t have to wash up her slow cooker on the day because she reheated the leftovers the next day instead.

Today I wanted to share with you the slow cooker much easier version of a beef mince pasta bake.

Can You Put Uncooked Pasta In Slow Cooker?

I get asked this a LOT! And YES, you can. It is often referred to in recipes as no boil pasta bake and basically means you are loading dried pasta into the slow cooker and it cooks with the rest of the food.

Its like a totally different way to achieve a creamy mince pasta bake because you are not having to worry about boiling the pasta first, because the mince and pasta cook at the same time.

Do You Have To Brown Mince Before Putting In Slow Cooker?

No, you don’t. You can load minced beef directly into a slow cooker with your other ingredients and it will cook without being browned first.

But there are things to note, before you do this:

Don’t do this with a high fat mince. Go with minced beef or other minces such as chicken, turkey or veal that is low in fat. Otherwise, you will get a fatty pasta bake.

It can slow down the cook time. You will often brown mince first and then its finished in the oven. As you are not browning it won’t be as quick. But that is perfect for this recipe because we are slow cooking.

What To Put In Pasta Bake?

Pasta – You can use any pasta. Though for an even cook I recommend a medium shell or something like pasta twists or penne.

Sauce – A mince and pasta bake is not the same without the creamy sauce. We make a hidden veggie pasta sauce in the slow cooker first, before adding in pasta and mince. You can do the same or add a jar of tomato sauce.

Mince – We recommend that you use low fat mince. Avoid mince that says 25% fat because it will make your mince pasta bake way too fatty.

Seasoning – There is nothing worse than bland boring beef mince pasta bakes. I recommend oregano, thyme, basil, either one of these or all. Along with salt, pepper, and garlic. You can also add extra seasoning at the end if it doesn’t taste like it has enough flavour.

Then for the kitchen gadgets that we have used in this minced beef pasta bake recipe in the slow cooker, it has just been our Ninja Foodi. We have this one and it does an amazing job with its slow cooker function and is also ideal for sauteing first.

How To Make Pasta Bake With Mince?

In fact, I like to call it your beef pasta bake.

You can choose which vegetables to add if you want a mince and vegetable bake or you can avoid vegetables and forget our homemade tomato sauce. Then go straight to a jar of Dolmio and then skip the sauce making.

How Long To Cook Pasta Bake?

Our slow cooker beef pasta bake recipe is 3 hours to make the homemade tomato sauce, then a further 2 hours for creating the pasta bake.

If using a jar of tomato sauce, then you can achieve a perfectly cooked pasta bake in 2 hours on high or 3.5 hours on low.

What To Serve With Pasta Bake?

Here are even more recipes using minced beef. Or as they call it in the US ground beef: 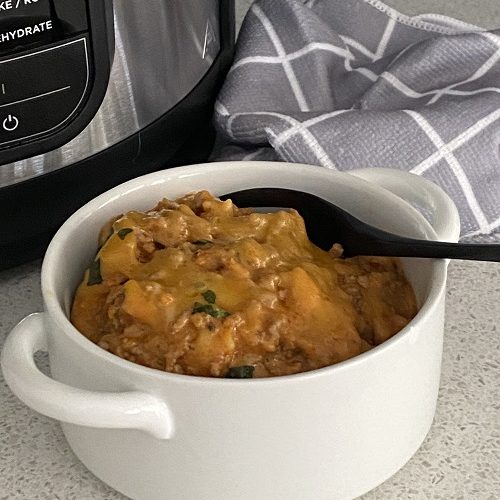 Layers. Its important that you follow the layers instructions above as it stops the pasta from going dry and allows for an even cook. You can keep it as layers when done and it will be similar to lasagne. Skip. If using a jar of tomato sauce and not making a hidden veggies sauce, then you can skip straight to step #4. Thanks for reading our slow cooker minced beef pasta bake recipe on Recipe This. We have many more slow cooker recipes for you to check out next. Though if you would like more family friendly recipes, then I recommend you try our slow cooker crème fraiche recipe next.

Calories: 841kcal | Carbohydrates: 112g | Protein: 39g | Fat: 26g | Saturated Fat: 11g | Polyunsaturated Fat: 2g | Monounsaturated Fat: 9g | Trans Fat: 1g | Cholesterol: 89mg | Sodium: 232mg | Potassium: 1207mg | Fiber: 9g | Sugar: 12g | Vitamin A: 1783IU | Vitamin C: 40mg | Calcium: 207mg | Iron: 5mg
Nutrition InfoPlease Note: Nutrition values are our best estimate based on the software we use at Recipe This and are meant as a guide. If you rely on them for your diet, use your preferred nutrition calculator.
Are We Friends On Pinterest?If we are not and you use Pinterest then follow us @RecipeThisBlog for more delicious recipes.
Fancy A Video?Subscribe to the Recipe This YouTube Channel for full length recipe videos. Don’t forget to click the bell icon to be notified when we upload a new video. Subscribe Here!
Copyright Notice© RecipeThis.com. ALL content including photos are copyright protected. Sharing of our recipes is both encouraged and appreciated via the social share buttons. Copying and/or pasting full recipes to any social media channel or onto your own website is strictly prohibited.