Traditional bacon hotpot got a slow cooker makeover in this yummy, quick prep, hearty bacon hotpot with plenty of leftovers for another day.

This potato onion and bacon hotpot is loaded with flavour, loaded with veggies and perfect for busy weeknights when you want something simple.

Is it me or does it feel like food prices are constantly on the rise? I look back at what I used to buy and can’t believe the steady increase and how that favourite one pot dinner suddenly got expensive.

And whilst most things have gone up in price, the best food that keeps us full for hours and costs a lot less than other dinners is the traditional hotpot.

You can make a big hotpot on cheap food you already have in and then the leftovers are perfect for the next day for a quick leftovers meal.

In today’s bacon hotpot recipe, I have combined a frozen veggie bag that I forgot about from the freezer, along with some bacon chops from the freezer that I had also forgotten about.

Then mixed this up with potatoes that needed using and that white onion that was starting to look like it had seen better days.

Combined, it made a delicious hearty potato onion and bacon hotpot.

You can then do the same at home, by using up your leftovers for a hotpot that is a little different but still follows the same traditional principles.

What Is A Bacon Hotpot?

A hotpot made with bacon.

A classic hotpot always has the same two ingredients – potato and onion.

The onions are always sauteed at the start of cooking with either extra virgin olive oil or with butter.

You then add in meat and other ingredients such as root vegetables.

To make a bacon hotpot you would simply have bacon, or bacon chops as your main meat.

Plus, you can then place your slow cooker in the fridge overnight for easy storage of your leftovers.

What Are Bacon Chops?

I often get asked what are bacon chops or what cut is a bacon chop? Well, a bacon chop is simply a thick slice of bacon.

Take a look at our bacon chops from our favourite butchers:

As you can see you could get several slices of bacon from this bacon chop and it makes a fantastic base for a stew, casserole or of course a bacon hotpot.

This is because when you make a bacon hotpot the bacon will often disappear as its small to begin with and will get lost among the veggies.

By using bacon chops you have amazing texture to your hotpot and its so easy to prep too.

What Is The Difference Between Stew & Hotpot?

Well, a stew doesn’t have a yummy sliced potato topping. Instead, stew is traditionally served with dumplings, or in the Milner house we often have our stew with some homemade bread maker bread.

A hotpot just like a stew is cooked slow and is often cooked in a delicious stock, depending on the stew or hotpot you are cooking.

If you love stew, you will love a hotpot.

Bacon – I recommend you use bacon chops as they produce a better bacon hotpot recipe. You can also swap the bacon for pork steaks or some pork loin that you have diced.

Potatoes – You can’t make a hotpot without potatoes and you can use any you have in. You can make it more like a hotpot like we have done, or just randomly add in sliced potatoes.

Onions – Then of course a bacon hotpot recipe wouldn’t be the same without adding a white onion.

Butter – Because I am making a traditional bacon hotpot, I am also opting for some butter for cooking the onion with, rather than extra virgin olive oil.

Veggies – I have also added in potatoes and a frozen veggie casserole pack from Iceland. These really bulk up your bacon hotpot and ensure that it can be a cheap as chips way to feed your family for the next couple of days.

Then for the kitchen gadgets that we have used in this bacon hotpot slow cooker recipe it has just been our Crockpot Slow Cooker. We have this one and its wonderful for many types of hotpots and we have used it many times for similar recipes.

What Makes This An Easy Bacon Hotpot Recipe?

If you want an easy bacon hotpot recipe, then it is all about the ingredients. The bacon chops don’t need any prepping apart from quickly cutting into chunks.

The veggies we are using are bought already prepped and only real prep is peeling and slicing the potato and onion.

How To Make Bacon Hotpot In Slow Cooker?

And I am sure you can see why this slow cooker bacon hotpot recipe is a true favourite of mine.

How Long To Cook Bacon Hotpot?

The slow cooker bacon hotpot cook time depends on how big the chunks of bacon chops are, and whether they are already cooked.

For example, if I was using leftover bacon chops I would add them last and the whole bacon hotpot would be cooked in 2 hours.

However, because I am dumping everything in and cooking the hotpot from scratch it takes 4 hours on high or 7 hours on low.

Slow Cooker Trick – Always buy a slow cooker like this Crockpot one that we own. It can go on the stovetop to brown meat and go in the oven.

This bacon hotpot in the slow cooker is part of our series dedicated to simple hotpots you can make in your slow cooker for busy mealtimes. Below you will find the rest of the series.

And don’t forget to check out the rest of our slow cooker recipes in order of most recent recipe first.

Your bacon hotpot in slow cooker recipe is below, note you can print it out with or without photos, adjust servings, or click between metric and imperial depending on where you are in the world. 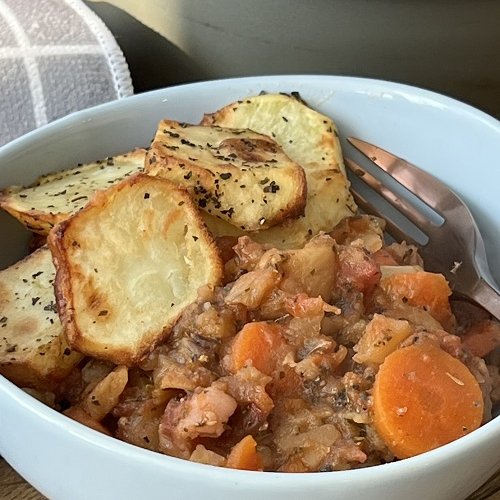 Calories: 224kcal | Carbohydrates: 40g | Protein: 8g | Fat: 5g | Saturated Fat: 2g | Polyunsaturated Fat: 1g | Monounsaturated Fat: 2g | Trans Fat: 1g | Cholesterol: 7mg | Sodium: 203mg | Potassium: 882mg | Fiber: 8g | Sugar: 3g | Vitamin A: 6456IU | Vitamin C: 42mg | Calcium: 67mg | Iron: 3mg
Nutrition InfoPlease Note: Nutrition values are our best estimate based on the software we use at Recipe This and are meant as a guide. If you rely on them for your diet, use your preferred nutrition calculator.
Are We Friends On Pinterest?If we are not and you use Pinterest then follow us @RecipeThisBlog for more delicious recipes.
Fancy A Video?Subscribe to the Recipe This YouTube Channel for full length recipe videos. Don’t forget to click the bell icon to be notified when we upload a new video. Subscribe Here!
Copyright Notice© RecipeThis.com. ALL content including photos are copyright protected. Sharing of our recipes is both encouraged and appreciated via the social share buttons. Copying and/or pasting full recipes to any social media channel or onto your own website is strictly prohibited.