Slow Cooker Porridge. Introducing you to the best way to make porridge. Porridge ingredients are dumped in the slow cooker and like magic come back later to perfectly cooked creamy porridge.

This healthy porridge can be cooked overnight or cooked early morning for a comforting Sunday brunch.

If you would rather make a fast porridge, then check out our instant pot porridge.

Are you a fan of porridge? I am as long as it is a creamy porridge, and I can add my favourite toppings.

Otherwise, I will run a mile if porridge is on the menu.

Though when I do have porridge, I love how many hours it fills me up for, how comforting it is and best of all how it stops the kids from asking for a snack a couple of hours after their breakfast.

You can also reheat your porridge for another day, or even meal prep 4 days worth of porridge at the same time using the slow cooker.

Can You Make Porridge In A Slow Cooker?

Yes, you can. Slow cooker porridge is amazing and so easy to do too. Its much easier than slaving over porridge on the stovetop. You don’t have to constantly stir it and can just dump the ingredients into the slow cooker and come back to cooked creamy porridge.

Can You Leave A Slow Cooker On Overnight?

Yes, you can! But I am rather a control freak, and it freaks me out leaving the slow cooker on whilst I sleep.

I am always convinced something is going to go wrong, because I am not checking on it and maybe I have just watched This Is Us too many times.

When you do leave a slow cooker on overnight note that many slow cooker recipes call for 7 hours on low and if you normally sleep for 8-9 hours note you are leaving your food on overnight for longer than recommended.

Instead, if you are cooking overnight in the slow cooker, use a slower slow cooker. Such as the one for the instant pot pressure cooker, or the Ninja Foodi as 8.5 hours on these is like 7 hours on a powerful Crockpot.

Can You Make Porridge With Water?

Yes, you can. BUT you will most likely regret doing so.

Porridge with water is awful (of course in my opinion). Its so bland and will remind you of bad porridge experiences as a kid.

Its just got no creaminess to it and I have to force myself to eat porridge with water.

Yes, they are. Its just another name for it, depending on where you are from.

In the UK we would always refer to it as porridge oats and having porridge for breakfast. Whilst in the USA you would be having oatmeal for breakfast and using rolled oats.

There are also other name differences with other breakfast such as steel cut oats vs pinhead oats.

Which Oats Are Best For Porridge?

The best porridge oats are these ones that I buy from Amazon. They are gluten free and quality rolled oats. You can also buy them in a pack of 4 containers and they will last you a while if you plan to have porridge for breakfast on a regular basis.

Which oats are best for breakfast also depends on how long you want to cook your porridge for.

For example, if you want to make overnight porridge then its best to use pinhead oats (also known as steel cut oats) because they are a little slower cooking and you will have a better balance in texture.

I personally love both steel cut oats or rolled oats.

Though, I always use gluten free oats because they are less starchy and cause less bloating.

Oats – I recommend gluten free rolled oats for this recipe. They cook better in the slow cooker and are much healthier too for a good start to the day.

Coconut Oil – This is my secret ingredient in this porridge recipe. You add the coconut oil to the bottom and sides of the slow cooker and it stops the oats from sticking and prevents a terrible clean up job of your slow cooker.

Butter – It is so true, how much better food tastes when you add butter. To give your porridge a creamy texture and the XFactor we add in a small amount of butter. It melts as the porridge slow cooks and makes it amazing.

Milk – For that wonderful creamy texture we are using skimmed milk and butter. The two complement each other well, without it being too high in calories and avoiding cream.

Then for the kitchen gadgets that we have used in this porridge, it has just been our Crockpot. We have this one and it does an amazing job and is also ideal for sauteing too.

How Much Porridge Per Person?

This of course, depends on your portion size and how much porridge you like to eat. This batch of porridge in our Crockpot was enough to feed four adults.

Therefore, if you want porridge for one person, you can reheat this and have it for Monday to Thursday.

What Is The Porridge To Milk Ratio?

The liquid also is best if it is thin liquid otherwise you will need more.

For example, we used 2 cups of skimmed milk and 5 cups of water. But if you wanted to use full fat milk, then you would need to add an extra cup of water to balance it out.

How Do You Make Porridge?

How Long To Cook Porridge?

For example, an Instant Pot pressure cooker or a Ninja Foodi have a much slower slow cooker and they are ideal for overnight porridge without it being burnt or overcooked.

If using a slower one, they take 8-9 hours on low. Whilst a fast slow cooker (think a modern Crockpot) can do it on high in 2 hours.

My best advice is using a slow one if you want overnight porridge, and then if you want to put it on in the morning for brunch or for meal prep, use a faster one for 2 hours on high.

Can You Reheat Porridge?

Yes, you can. Porridge is perfect for reheating and its so easy to do so. Plus, if you made a batch of slow cooker porridge one day, you could place the slow cooker pot in your fridge, then the next morning give it a quick reheat.

We found that when we experimented with this, that 30-40 minutes on high was perfect for reheating your porridge. Though we do recommend you add a little extra milk to stop it from being dry.

Can You Freeze Porridge?

Yes, you can. To freeze your leftover porridge you need to make sure it is cold first. This is because you will end up with a lot of condensation and it wont be nice for reheating at a later date.

Then once your porridge is cold, place it into a freezer container and load into the freezer.

Then allow to thaw and reheat from defrosted within 3 months.

What To Put In Porridge?

If you would like to make your porridge more interesting, you can add a few of your favourite toppings.

I love to add to my porridge frozen fruit that has thawed and some Greek yoghurt.

You can also add sliced banana, honey, or maple syrup. Though if my hubby Dominic is about, it will be golden syrup that is added. 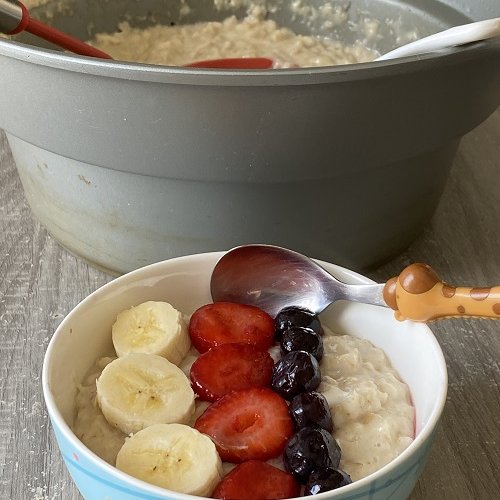 Paleo. If you want a paleo version, swap the milk and butter for coconut milk and coconut oil. Oats. Note we used Bobs Red Mill Gluten Free Oats as they stop the porridge oats from sticking as much and are not as heavy. Plus, they are perfect for a healthy gluten free breakfast. You can check them out here. Reheat. If you would like to reheat your porridge, then you can do so with 30 minutes on high. Or turn off your slow cooker and leave the lid on and it will stay warm for 2 hours. Thanks for reading our slow cooker porridge recipe on Recipe This. We have many more slow cooker recipes for you to check out next. Though if you would like more slow cooker classics, I recommend you try our slow cooker rice pudding recipe next.

Calories: 312kcal | Carbohydrates: 47g | Protein: 12g | Fat: 9g | Saturated Fat: 4g | Polyunsaturated Fat: 2g | Monounsaturated Fat: 2g | Trans Fat: 1g | Cholesterol: 5mg | Sodium: 78mg | Potassium: 409mg | Fiber: 6g | Sugar: 7g | Vitamin A: 276IU | Calcium: 188mg | Iron: 3mg
Nutrition InfoPlease Note: Nutrition values are our best estimate based on the software we use at Recipe This and are meant as a guide. If you rely on them for your diet, use your preferred nutrition calculator.
Are We Friends On Pinterest?If we are not and you use Pinterest then follow us @RecipeThisBlog for more delicious recipes.
Fancy A Video?Subscribe to the Recipe This YouTube Channel for full length recipe videos. Don’t forget to click the bell icon to be notified when we upload a new video. Subscribe Here!
Copyright Notice© RecipeThis.com. ALL content including photos are copyright protected. Sharing of our recipes is both encouraged and appreciated via the social share buttons. Copying and/or pasting full recipes to any social media channel or onto your own website is strictly prohibited.