Do you want to warm up ham for the holidays? Then let me introduce you to reheating ham in instant pot. With or without pineapple, so easy and never goes dry.

Whether you call it reheating ham or reheating gammon its just perfect for doing at home in your electric pressure cooker.

Here in the UK, we have gammon, which is like an uncooked ham that is very similar to Virginia ham. We cook our gammon raw and then it turns into ham. Because its just as quick cooking as it is reheating ham, we often don’t reheat and cook it as we need it.

But one of our readers at Recipe This recently came to us and said they had followed reheating ham instructions for the instant pot, and they didn’t work and would we give it a go.

So, what we did was cook our instant pot gammon recipe, then we allowed it to cool and then reheated it the next day in the instant pot to get the time and temps and the flavours spot on.

Today, we will be showing you how to reheat any ham or gammon in the instant pot, the easy way and its just perfect for Sunday roasts or a seasonal dinner.

Are You New To The Instant Pot?

Click here or on the banner above and you will have access to both in an instant.

Can You Cook Ham In A Pressure Cooker?

Yes, you can cook ham in a pressure cooker. But if you are wanting to cook ham rather than reheating ham, I recommend you follow our instant pot gammon recipe instead.

Can I Reheat A Precooked Ham In The Instant Pot?

Yes, you can reheat a precooked ham in the instant pot and its super easy. It’s so easy I could give the instructions to Jorge (he is 6 as I write this) and then you can let the instant pot do the hard work.

What Is The Best Way To Heat Up Leftover Ham?

The best way to heat up leftover ham is in the electric pressure cooker. The instant pot and other pressure cookers like the Ninja Foodi or the Pressure King Pro cook food fast, making it fantastic for quickly getting your holiday ham on the dinner table.

Even better, you can then save the juices leftover from your instant pot ham to make a ham gravy with.

How Do You Reheat A Ham Without Drying It Out?

If you want to avoid reheating ham and the ham drying out, then I highly recommend using some foil.

This will of course, slow down the cook time, but its worth it for how good and moist the ham is once cooked.

Would you like easy & amazing instant pot recipes from instant pot experts? Click here and join the Recipe This Newsletter. We will then send you the BEST instant pot beginner recipes direct to your email inbox along with other useful instant pot resources.

Ham – You will need a precooked ham. We used a 1.5kg/3.3lb cooked gammon in this recipe but you can do spiral ham or any other similar ham.

Juice – Rather than water in the instant pot and to flavour the pot we used pineapple juice. You can also use apple cider or apple juice or something similar.

Pineapple. Then as its for the holidays we have to have the pineapple on the ham. We used a can of pineapple rings as they are easier to cook with.

Honey & Mustard – Plus ham in the instant pot wouldn’t be the same without some honey and mustard.

Plus, I also recommend adding in some garlic puree too. You don’t need salt and pepper because ham is naturally salty.

Then for the kitchen gadgets that we have used in this pressure cook ham recipe in the instant pot it has just been our Instant Pot. We have this one and it’s my favourite and great for a lot of different instant pot quick recipes.

Plus, we recommend you head over to our instant pot recipes category as we have many electric pressure cooker recipes and have been using instant pots for 5 years.

How To Heat Ham In Instant Pot?

And I am sure you can see now how simple and easy it is pressure cooking ham and why you should be doing the same.

How Long To Cook Ham In Instant Pot?

But I get it, we don’t all have the same sized instant pot ham to cook. So let me show you the maths and then you can vary the cook time of your reheated ham depending on what you have.

Because our ham is 3.3lbs we went with 7+10+10=27 minutes as we had rounded it off and then of course, plus a 10 minute natural pressure release.

What To Serve With Your Instant Pot Ham Recipe?

Your pressure cooker ham recipe is below, note you can print it out with or without photos, adjust servings, or click between metric and imperial depending on where you are in the world.

Though before you do, don’t forget to subscribe, and grab your FREE VIP Pass to Recipe This. You will get access to our latest recipes first, you will be able to request recipes, you will have access to free mini courses, free instant pot ebooks and useful instant pot cook time charts and so much more. 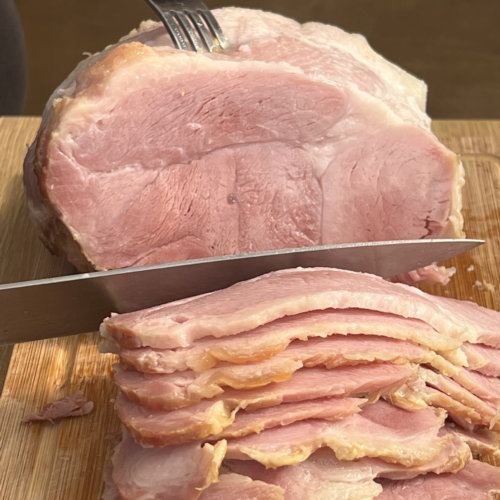 Do you want to warm up ham for the holidays? Then let me introduce you to reheating ham in instant pot. With or without pineapple, so easy and never goes dry.
Prep Time2 mins
Cook Time27 mins
Total Time29 mins
Course: Main Course
Cuisine: Instant Pot
Servings: 6
Calories: 480kcal
Author: RecipeThis.com

Calories: 480kcal | Carbohydrates: 27g | Protein: 48g | Fat: 19g | Saturated Fat: 4g | Polyunsaturated Fat: 2g | Monounsaturated Fat: 7g | Cholesterol: 183mg | Sodium: 2918mg | Potassium: 903mg | Fiber: 1g | Sugar: 23g | Vitamin A: 39IU | Vitamin C: 73mg | Calcium: 41mg | Iron: 3mg
Nutrition InfoPlease Note: Nutrition values are our best estimate based on the software we use at Recipe This and are meant as a guide. If you rely on them for your diet, use your preferred nutrition calculator.
Have You Tried The Instant Pot Mini Course?Its FREE and its delivered by email over 5 days. Ideal for beginners to the instant pot Click Here.
Are We Friends On Pinterest?If we are not and you use Pinterest then follow us @RecipeThisBlog for more delicious recipes.
Fancy A Video?Subscribe to the Recipe This YouTube Channel for full length recipe videos. Don’t forget to click the bell icon to be notified when we upload a new video. Subscribe Here!
Copyright Notice© RecipeThis.com. ALL content including photos are copyright protected. Sharing of our recipes is both encouraged and appreciated via the social share buttons. Copying and/or pasting full recipes to any social media channel or onto your own website is strictly prohibited.