Instant Pot Paella takes me back to the beautiful region of Valencia in Spain and the flavoursome local dish paella. Loaded with saffron infused rice, seafood, chorizo and chicken, it is the best Spanish rice dish I have ever tried.

Instant Pot paella is an update of my one pot 30-minute easy paella that I originally published on the blog back in 2016. It is one of those recipes that my readers have asked me time and time again to convert to the Instant Pot and here it is!

Drum roll please we finally have Instant Pot Paella on the blog!

We all have that favourite food that we love. That one dish that completes us. The one dish we would move heaven and earth to get to.

Kyle has always been obsessed with lasagne and would always nag me for it until I cooked it for him, Dominic is addicted to burgers and my obsession has always been the Spanish dish Paella.

I would have holidays in Benidorm as a teenager. We would spend the fortnight of the Christmas holidays there and it was one of those over the top places driven by English tourists.

It was like you had placed an English seaside town in Spain and that is what you had achieved. You would walk down to the seafront and on the corner, there would be a McDonalds followed by café after café selling English breakfasts.

Clearly, I rebelled as I am really not a fan of English food and when someone offered me some Spanish food in the form of a really big Paella at a barbeque I was in love.

Since then it has remained my favourite food. Spain is only a 90-minute drive away from our front door and whenever we go, I am planning my lunch at a restaurant that serves fresh Paella.

We also have our Portuguese version in the local cafes called cataplana which is just as nice, so I am often in food heaven.

But could you make an Instant Pot Paella in the time to takes for a takeaway to arrive on your doorstep? Including the time to prep the food and the time the Instant Pot takes to go to pressure?

The Instant Pot Paella I am making for you today is a mixed paella. The mixed paella is the paella I have nearly always been served and is the most famous among tourists. Imagine it as a surf and turf with a good mix of meat and fish.

If you ordered a mixed paella in a restaurant you would expect to receive:

Though it can vary from region to region.

You can use a bag of mixed seafood that you have purchased from the supermarket along with some diced chicken to achieve a similar result.

Though if you went to Valencia and had an authentic paella you would expect to see rabbit on the meat list and have less seafood.

I get it, not everyone wanted a mixed paella and we all have favourite foods and hated foods. The great thing about paella is that you can use the basics of it and then add your favourite meat or fish, or even keep it vegetarian.

My all-time favourite paella though, is chicken paella and then the top is decorated with mussels and king prawns.

Or go old school, paella started as a dish of leftovers that servants ate, so why not clear out your fridge or freezer of spare meat, fish or vegetables that you have in?

I am sure before I dive in with our Instant Pot Paella, I am sure if you have not tried paella before, you will want to know what it is all about.

Paella comes from the Valencian region of Spain though as it is regarded as the best dish of Spain by tourists, means that it can be found in nearly all restaurants in Spain, to please the tourists. But to Spaniards it is considered to be just one great dish among their many local dishes.

Paella to tourists visiting Spain is like American tourists heading to Mexico for tacos. It would just feel wrong to visit the country and not have some.

There are several versions of Paella including Valencian paella, mixed paella, chicken paella and vegetable paella. All of which you will find on a menu in Spain.

Paella is a Spanish rice made up of short grain rice. Many countries on the Mediterranean use risotto rice for it as it cooks it perfectly.

It is flavoured with threads of saffron, a fish stock and often features green peas, red peppers, plus the meat or fish or vegetables for the type of paella that you are having.

Cooking Paella In The Instant Pot

Even though a classic paella uses a large paella pan, it is easy to make your own version of paella at home using the Instant Pot, or any other brand of electric pressure cooker.

Paella is essentially, a one pot cooking recipe making it perfect for the Instant Pot. Because of the Instant Pot having a pressure cook and a sauté setting, you can sauté your paella first and then pressure cook, instead of simmering like you would in a pan.

How To Cook Paella In The Instant Pot?

Paella probably looks over complicated to you, when you see a recipe or a video online, but it is easy. Many of my parents’ friends made it after an afternoon of drinking wine and if they can do it drunk, I am sure you can do it the easy way in the Instant Pot while sober.

The process of Paella is best described through the different stages.

How Long Does It Take To Cook Paella In The Instant Pot?

What if I told you that the cooking time in the Instant Pot is JUST 6 minutes? That of course is 6 minutes under pressure to cook your paella. You need to factor in time for the Instant Pot to go to pressure, as well as the sautéing process.

Over all you can still have Instant Pot Paella on the dinner table in under 30 minutes.

Many people find cooking rice in the Instant Pot rather scary. There is the fear of overcooked rice and ruined inner pots. But it is easier than you think to make Instant Pot Rice.

Here are a few more of our favourite Instant Pot Rice Recipes: 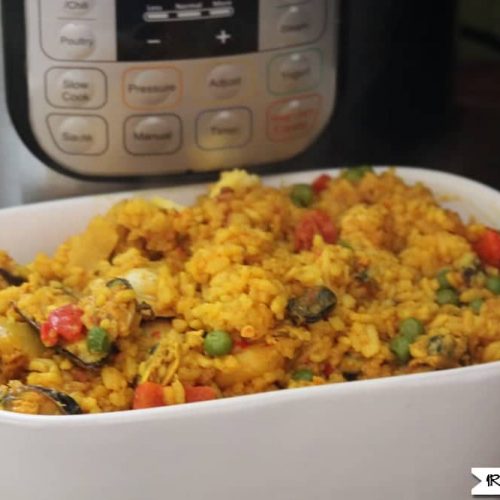 The thing about paella is it is a big dish for sharing, you can use the button above to change it based on how many people you plan to feed. Paella once cooled, is perfect for the freezer and reheating for later. Many people can’t get saffron and instead swap it for turmeric which gives a similar colouring and flavour. It is important that you use frozen seafood because otherwise it will overcook. We got our paella stock from Spain, but any fish stock such as this one is a good alternative. The mixed seafood bag that we had was a good mix of the Mediterranean such as more prawns, more mussels, squid, clams and small pieces of white fish. A good rule to avoid dry rice is to make sure you have nearly double the liquid to rice. For example, we used 3 cups of rice to 5 cups of stock. As well as this we had liquid from the frozen seafood as well as the white wine.

Calories: 449kcal | Carbohydrates: 66g | Protein: 28g | Fat: 5g | Saturated Fat: 1g | Cholesterol: 121mg | Sodium: 391mg | Potassium: 488mg | Fiber: 3g | Sugar: 2g | Vitamin A: 1070IU | Vitamin C: 29.5mg | Calcium: 72mg | Iron: 5.8mg
Nutrition InfoPlease Note: Nutrition values are our best estimate based on the software we use at Recipe This and are meant as a guide. If you rely on them for your diet, use your preferred nutrition calculator.
Are We Friends On Pinterest?If we are not and you use Pinterest then follow us @RecipeThisBlog for more delicious recipes.
Fancy A Video?Subscribe to the Recipe This YouTube Channel for full length recipe videos. Don’t forget to click the bell icon to be notified when we upload a new video. Subscribe Here!
Copyright Notice© RecipeThis.com. ALL content including photos are copyright protected. Sharing of our recipes is both encouraged and appreciated via the social share buttons. Copying and/or pasting full recipes to any social media channel or onto your own website is strictly prohibited.