How To Reheat Cinnamon Rolls In Air Fryer? Introducing you the best way to reheat cinnamon rolls. If you want to make your cinnamon rolls ahead or have leftovers that need reheating, then this is how it is done.

How To Reheat Cinnamon Rolls?

I had heard of cinnamon rolls in the movies and in TV shows, but never had the pleasure of trying one.

Then a new shopping centre opened in Portugal with a Starbucks and in the fall they had cinnamon rolls.

I sat down outside with the rest of the family (who don’t like them) and bit into my first ever cinnamon roll.

I was in love, and it paired perfectly with a Starbucks warm hot chocolate.

But the problem was that Starbucks was over an hour round trip from our home when we lived in Portugal, and I had a cinnamon roll addiction.

Today I wanted to show you how to reheat cinnamon rolls. Whether it’s bringing it home from the coffee shop, making them ahead of time or simply reheating your leftovers.

Plus, as well as our free newsletter, we also have a free air fryer mini course. It is ideal for air fryer beginners or those that want to get more confident with their air fryer. The free course runs for 5 days with a new lesson delivered each day to your inbox.

Can You Reheat Cinnamon Rolls?

Though of course, this depends on how you reheat your cinnamon rolls and I will be showing you today the best way to reheat them at home.

Can You Reheat Cinnamon Rolls In Air Fryer?

Plus, the air fryer is very easy to clean after reheating your rolls and you can do as many or as few as you want.

Can You Eat Cinnamon Rolls The Next Day?

What Is The Best Way To Reheat Cinnamon Rolls?

The best way to reheat cinnamon rolls is with your air fryer. Though I am sure you have guessed that I was going to say that!

Its because not only does the air fryer heat them up, but it stops your cinnamon rolls from drying out and it adds an amazing crisp to them.

The crisp on your cinnamon rolls is a bit like how doughnuts are at the fair and so yummy.

How Do You Reheat Cinnamon Rolls?

Note that when you reheat cinnamon rolls using the air fryer method it will melt the icing that is on top, and you can only do 4 at once due to the air fryer size.

If doing more than four, then we recommend that you do them in batches.

What Temp To Reheat Cinnamon Rolls?

The recommended reheat cinnamon rolls temperature is 160c/320f. This will ensure that your cinnamon rolls are cooked in the centre and not just on top. Plus, the air fryer can get very hot and if you go too hot its like you’re cooking it again rather than reheating.

How Long Do Cinnamon Rolls Last?

Reheated cinnamon rolls are good for another 2 days and then you need to consume them. But I would wait and reheat your cinnamon rolls when you are going to eat them and not let them go cold again.

After all, cinnamon rolls or cinnamon buns are at their best when the icing has melted and they are like warm baked goods.

Can You Freeze Cinnamon Rolls?

Yes, you sure can. I often get asked do cinnamon rolls freeze well and I always want to shout from the rooftops how fantastic freezing cinnamon rolls is.

You can make ahead some cinnamon rolls and then freeze them ahead of time. This is fantastic for Thanksgiving and Christmas and allows you to take the stress out of the holidays, knowing that they are ready to go.

You can then thaw them the night before and then use the air fryer to heat up your cinnamon rolls.

More Food You Can Reheat In An Air Fryer

Now you know how to warm up cinnamon rolls in air fryer, here are a few more favourite foods that you can reheat in the air fryer. And if you are reading this during the holidays make sure you start with reheating stuffing as that is another time saver.

Plus, don’t miss our guide to cooking reheating food in the air fryer. 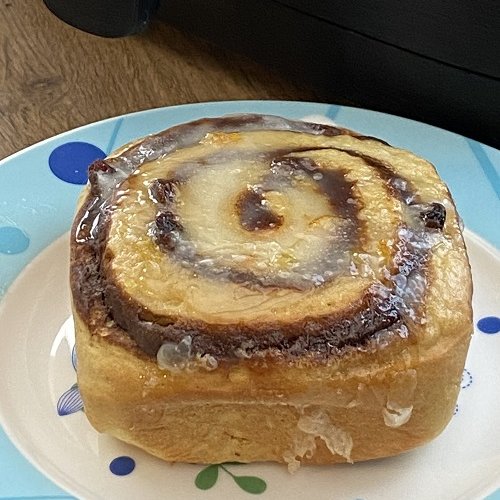 How To Reheat Cinnamon Rolls In Air Fryer

How To Reheat Cinnamon Rolls In Air Fryer? Introducing you the best way to reheat cinnamon rolls. If you want to make your cinnamon rolls ahead or have leftovers that need reheating, then this is how it is done.
Cook Time6 mins
Total Time6 mins
Course: Snack
Cuisine: Air Fryer
Servings: 2
Calories: 420kcal
Author: RecipeThis.com

Optional. We did both cinnamon rolls with and without foil and found the cook time and temp were the same and the mess was minimal. Its totally up to you which method you do. Temperature. Don’t be tempted to increase the temperature as you don’t want to dry out your rolls. Thanks for reading How to reheat cinnamon rolls Air Fryer recipe on Recipe This. We have many more air fryer recipes for you to check out next. Though if you would like more holiday ideas, I recommend you check out our air fryer turkey wings next.

Serving: 118g | Calories: 420kcal | Carbohydrates: 67g | Protein: 8g | Fat: 13g | Saturated Fat: 7g | Cholesterol: 65mg | Sodium: 400mg | Sugar: 32g
Nutrition InfoPlease Note: Nutrition values are our best estimate based on the software we use at Recipe This and are meant as a guide. If you rely on them for your diet, use your preferred nutrition calculator.
Have You Tried The Air Fryer Mini Course?Its FREE and its delivered by email over 5 days. Ideal for beginners to the Air Fryer Click here.
Are We Friends On Pinterest?If we are not and you use Pinterest then follow us @RecipeThisBlog for more delicious recipes.
Fancy A Video?Subscribe to the Recipe This YouTube Channel for full length recipe videos. Don’t forget to click the bell icon to be notified when we upload a new video. Subscribe Here!
Copyright Notice© RecipeThis.com. ALL content including photos are copyright protected. Sharing of our recipes is both encouraged and appreciated via the social share buttons. Copying and/or pasting full recipes to any social media channel or onto your own website is strictly prohibited.