Because it is loaded with full fat coconut milk, this chocolate ice cream is filling, yet satisfying and perfect for those that follow Paleo or are looking for a dairy free coconut milk ice cream.

Rewind back to 2015. Sofia was less than a year old and cute Jorge was a future dream that complete our family.

I was also following Paleo 100% of the time and had used it to shift a lot of weight.

Even though I loved the paleo lifestyle, I was never a fan of the sweet treats that many people made. With an allergy for nuts and seeds. Along with a hatred for coconut flour, many of the paleo sweet treats were out for me.

Back then we had just got our first ever ice cream maker and Dominic had this great idea to make me some paleo chocolate ice cream using coconut milk.

It would involve simple ingredients such as coconut milk, cocoa powder, and honey as the sweetener.

It was amazing and our coconut milk ice cream obsession started.

We would swap the cocoa powder for other favourites such as some frozen strawberries, some banana or even mix pineapple and coconut sugar for a pina colada.

This is Dominic’s original paleo chocolate ice cream recipe updated for you and OMG I just want to binge on it.

Yes, it does, but it is not as strong on the coconut as you would expect. I am not a big fan of sweet coconut treats and hate how strong a flavour it can be.

For example, I find that coconut flour is too strong a flavour for me, and I hate Bounty chocolate for that same reason.

Yet, I love coconut milk chocolate ice cream because its more a subtle flavour of coconut.

When Dominic created this ice cream made with coconut milk, it was for me so that I could have a paleo chocolate ice cream and was never meant for sharing.

Then we realised it was so good, we had to show others how to do it.

But what if you are vegan? Well, you just need one simple ingredient swap and that is the honey. Apart from this everything else is vegan.

Just swap it for maple syrup or another favourite natural sweetener and you are good!

Because if you have not made it before, then it can be a shock with the differences.

Coconut Milk – For the best canned coconut milk for ice cream, focus on a full fat coconut milk. It will ensure your ice cream thickens perfectly and two cans is all that is required to make enough ice cream for your family.

Sugar – We recommend using coconut sugar. It is a healthier sugar, mixes well in an ice cream maker and improves the flavour of the ice cream.

Honey. For an extra natural flavour, I recommend honey. Though you can swap this with maple syrup if you are vegan.

Cocoa. I recommend a small amount of cocoa as it can be rather strong. Unlike unhealthy ice creams natural chocolate ice cream will have a hint of colour and wont be dark brown.

Then for the kitchen gadgets that we have used in this homemade coconut milk ice cream recipe, it has just been our Italian Ice Cream Maker. We have this one and its wonderful for churning any of your classic ice creams.

You have to love paleo coconut ice cream for its zero prep. Because with regular ice creams you have eggs and sugar and cream to think about. But with this, its all in the ice cream maker and then you come back when it beeps. 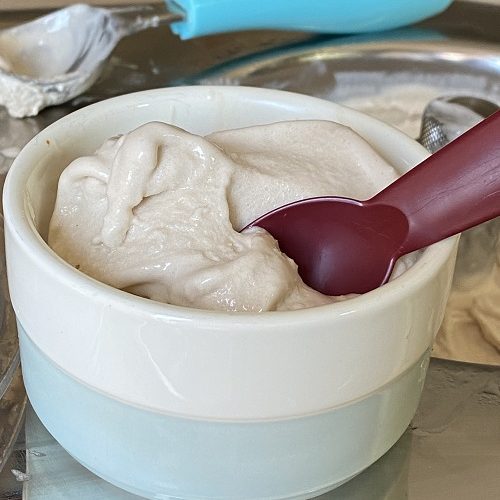 Churning. Most ice cream makers will take 40 minutes to churn your ice cream. If there is going to be a delay of 20 minutes before consuming, put it on for a little longer and it will prevent it from melting. Swap. You can use any cocoa powder. I was using a paleo one that was rather strong, if you are using a less organic one, you can double it up. You can also in chocolate chips and broken chocolate too if you prefer. Thanks for reading our Coconut Chocolate Ice Cream recipe on Recipe This. We have many more ice cream maker recipes for you to check out next. Though if you would like more ice cream ideas, then I recommend you try our blender nice cream next.

Calories: 46kcal | Carbohydrates: 11g | Protein: 1g | Fat: 1g | Saturated Fat: 1g | Monounsaturated Fat: 1g | Sodium: 5mg | Potassium: 11mg | Fiber: 1g | Sugar: 10g | Vitamin C: 1mg | Calcium: 1mg | Iron: 1mg
Nutrition InfoPlease Note: Nutrition values are our best estimate based on the software we use at Recipe This and are meant as a guide. If you rely on them for your diet, use your preferred nutrition calculator.
Are We Friends On Pinterest?If we are not and you use Pinterest then follow us @RecipeThisBlog for more delicious recipes.
Fancy A Video?Subscribe to the Recipe This YouTube Channel for full length recipe videos. Don’t forget to click the bell icon to be notified when we upload a new video. Subscribe Here!
Copyright Notice© RecipeThis.com. ALL content including photos are copyright protected. Sharing of our recipes is both encouraged and appreciated via the social share buttons. Copying and/or pasting full recipes to any social media channel or onto your own website is strictly prohibited.