After Eight Ice Cream. Learn how to make a refreshing, easy, Italian style after eight ice cream at home with your ice cream maker.

You only need a small portion of after eight mints to make this ice cream. Making it fantastic for leftovers or serve this at your next dinner party for the wow factor.

Our after eight ice cream recipe was originally shared on Recipe This in 2016 and we decided to update it for you, create some new photos and give you even more information about how to make homemade mint ice cream in the ice cream maker.

I will start by saying that after eight mints is something that I have grown up with. They have been part of my childhood and I couldn’t imagine not eating them. They were (and still are) my Dad’s favourite chocolate.

Every Christmas people would buy him for Christmas and at family gatherings there would always be some after eight mints doing the rounds.

Whenever there was a copycat version of after eight mints he would not be pleased, and I would get to eat them.

I was looking through our ice cream maker recipes category and checking out what classic ice cream recipes I have done vs not done.

Mint chocolate ice cream had kind of passed me by and with After Eight Mints being on offer this week in the supermarket I thought why not?

Why not chop up some After Eight Mints into some ice cream and enjoy a real treat.

If you love mints, love ice cream and love After Eight Mints then this is for you. Though beware you may find yourself bingeing on them before they even make their way into the freezer.

What Are After Eights?

Due to their TV ads, they are often associated with being the after dinner mint and something to serve with coffee or liquor after a meal.

After eight mints are manufactured by the popular Nestle chocolate brand after being purchased from Rowntree.

Many supermarkets like Tesco’s and Iceland sell after eight ice cream, but I love making my own homemade after eight mint ice cream.

Yolks – You will need four egg yolks to make a batch of after 8 mint ice cream. You can also use two egg yolks and make a smaller batch.

Sugar – We recommend using caster sugar for the best results with your homemade ice cream. I have tried other sugars and it has not been as nice.

Cream. You don’t need double cream or as some call it, heavy cream. Instead, some single cream will make you amazing creamy ice cream.

Milk – You will also need some whole milk. Don’t use semi or skimmed milk as it will not produce a creamy ice cream because it is too thin.

Those are of course, what you use with ANY ice cream maker recipe. Then of course you want to add in the diced after eight dinner mints. I recommend placing your dinner mints in the fridge and then dicing them. As once the after eight mints are at room temperature, they are much harder to prep.

Then for the kitchen gadgets that we have used in this homemade mint ice cream recipe, it has just been our Italian Ice Cream Maker. We have this one and its wonderful for churning any of your classic ice creams.

How To Make After Eight Ice Cream Maker Recipe?

Can You Freeze After Eight Mints?

Yes, you can! The fantastic thing about After Eight Mints is that they freeze incredibly well. 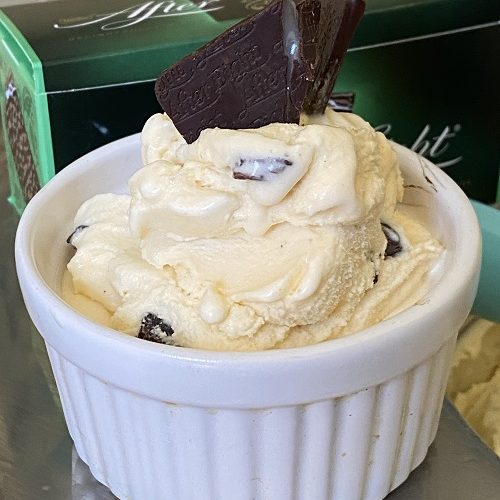 Churning. Most ice cream makers will take 40 minutes to churn your ice cream. If there is going to be a delay of 20 minutes before consuming, put it on for a little longer and it will prevent it from melting. Swap. Don’t have after eight mints? Or don’t like mint chocolate. Then swap for any tiny chunks of chocolate or slice up some chocolate. Thanks for reading our After Eight Ice Cream recipe on Recipe This. We have many more ice cream maker recipes for you to check out next. Though if you would like more dessert ideas, then I recommend you try our air fryer sponge cake next.

Calories: 473kcal | Carbohydrates: 36g | Protein: 12g | Fat: 31g | Saturated Fat: 16g | Polyunsaturated Fat: 3g | Monounsaturated Fat: 10g | Trans Fat: 1g | Cholesterol: 497mg | Sodium: 121mg | Potassium: 172mg | Fiber: 1g | Sugar: 33g | Vitamin A: 1230IU | Vitamin C: 1mg | Calcium: 102mg | Iron: 2mg
Nutrition InfoPlease Note: Nutrition values are our best estimate based on the software we use at Recipe This and are meant as a guide. If you rely on them for your diet, use your preferred nutrition calculator.
Are We Friends On Pinterest?If we are not and you use Pinterest then follow us @RecipeThisBlog for more delicious recipes.
Fancy A Video?Subscribe to the Recipe This YouTube Channel for full length recipe videos. Don’t forget to click the bell icon to be notified when we upload a new video. Subscribe Here!
Copyright Notice© RecipeThis.com. ALL content including photos are copyright protected. Sharing of our recipes is both encouraged and appreciated via the social share buttons. Copying and/or pasting full recipes to any social media channel or onto your own website is strictly prohibited.