Slow Cooker Rabbit Stew. A truly delicious creamy slow cooker rabbit stew loaded with seasonal vegetables and a creamy French style sauce made with the rabbit juices as it cooks.

This slow cooker rabbit stew is part of our stews and casseroles theme this month on Recipe This. We recently shared with you our slow cooker venison stew and today it is all about the rabbit.

I grew up in England and I don’t know anyone that had eaten rabbit or even considered making slow cooker rabbit stew. It just wasn’t something that you ate. Instead you would eat what I would call the common meats such as beef, chicken, pork, lamb and turkey.

But living in Portugal and being part of the Mediterranean lifestyle means that rabbit plays a big part in regular cooking.

The same can also be said for a lot of other European countries such as Spain, France and Italy. If you have never tried rabbit stew before, then I suggest you give it a go as cooked right it is delicious.

The funny thing is, that even though rabbit is freely available in Portugal and that my son always had it at school dinners, the rabbit that I am using in todays slow cooker rabbit stew came from Spain.

We were on our summer holiday in Spain and visited our favourite Spanish supermarket before crossing the border back into Portugal. It is a massive supermarket chain in Spain and is slowly opening stores in Portugal, though not in our area.

But what we love about the Spanish supermarket is the choice of fish and meat, that you just can’t get in Portugal. I loaded the trolley with a huge amount of meat and while grabbing some boneless chicken thighs I noticed some rabbit.

The rabbit was chopped like chicken is chopped for making chicken fricassee and I dumped two lots into my trolley ready for making a delicious rabbit stew in the slow cooker.

Our slow cooker rabbit stew has a French theme as that is how we like most of our casseroles and stews. If you want to be able to cook French food on a cheap budget then this is it.

You achieve the amazing French rabbit stew flavours thanks to:

For a finished dish I would say my slow cooker rabbit stew is like a carbonara. Thanks to the creamy sauce. Plus like with a lot of French food you only need to dice the garlic rather than grate it, making it easier to prepare.

Can we call this rabbit stew easy slow cooker rabbit stew? Because it is just so easy to prep and cook. The slow cooker does the hard work so that you don’t have to.

It is a typical slow cooker recipe of dump and start. Throw in your rabbit stew ingredients into your slow cooker and then come back a few hours later to perfectly cooked rabbit in a delicious stew.

My husband who is an ex chef, claimed that the rabbit stew was stunning and went back for seconds!

How To Slow Cook Rabbit?

There is often that fear when we cook something new. It’s also about the unknown or if we have paid extra for something, then you don’t want to screw it up.

Well I suggest that you think of rabbit like chicken. It tastes similar to chicken, but it is a little drier. Just like how lamb mince is drier than beef mince.

Quite often when you buy rabbit, it will come already prepped for you or you can ask your butcher to do this for you.

The most important thing to learn about cooking rabbit is that those bones are small, so if you slow cook for too long, you could end up with little bones in your rabbit stew. To avoid this, take the rabbit to just been cooked so that its not in tiny pieces in your slow cooker.

How To Slow Cook Rabbit Stew?

Once I have prepped the vegetables, I will add seasoning and the rabbit.

Now the slow cooker will do its magic and all you have to do is add in a few simple extra ingredients at the end of the cooking time.

It is one of those slow cooker stew recipes that has the wow factor, without much effort going into the cooking process. Or the kind of stew you can serve family when they come around for dinner.

What To Serve Rabbit Stew With?

For me the rabbit stew on its own is a delicious meal and a great one pot dinner. But its also nice to have sides with your slow cooker meals.

My first thought will always involve lots of butter and a big French bread stick. I mean you really can’t beat that can you?

Here are a few other serving suggestions for the rabbit stew: 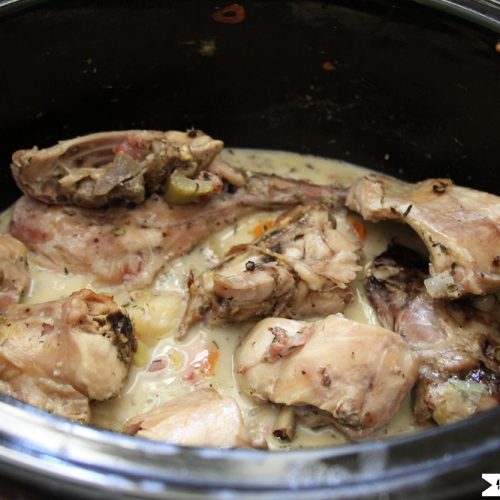 You can substitute single cream for coconut milk or keep it lower calorie by blending a little bit more of the stew. We recommend Butcher Box for your bacon and they often include free bacon for new customers. You can also read our Butcher Box Review. You don’t need to add stock because the combination of the bacon and rabbit juices as well as the white wine will do the job for you.

Calories: 555kcal | Carbohydrates: 31g | Protein: 42g | Fat: 28g | Saturated Fat: 11g | Cholesterol: 171mg | Sodium: 447mg | Potassium: 1366mg | Fiber: 8g | Sugar: 9g | Vitamin A: 8653IU | Vitamin C: 25mg | Calcium: 190mg | Iron: 9mg
Nutrition InfoPlease Note: Nutrition values are our best estimate based on the software we use at Recipe This and are meant as a guide. If you rely on them for your diet, use your preferred nutrition calculator.
Are We Friends On Pinterest?If we are not and you use Pinterest then follow us @RecipeThisBlog for more delicious recipes.
Fancy A Video?Subscribe to the Recipe This YouTube Channel for full length recipe videos. Don’t forget to click the bell icon to be notified when we upload a new video. Subscribe Here!
Copyright Notice© RecipeThis.com. ALL content including photos are copyright protected. Sharing of our recipes is both encouraged and appreciated via the social share buttons. Copying and/or pasting full recipes to any social media channel or onto your own website is strictly prohibited.