Our Slow Cooker Chinese Spare Ribs were originally published on Recipe This between 2015 and 2016. We have expanded on the Chinese spare ribs recipes to make it better than ever.

Today as we publish this update on our Slow Cooker Chinese spare ribs our eldest son will turn 18 years old. He absolutely loves it when I cook him Chinese spare ribs, though he will often complain at me that I HAVE NOT MADE ENOUGH. Though isn’t that every teen lad on the planet?

When we posted the original version of our Chinese spare ribs in the slow cooker, poor Kyle was at school and you would have thought we had turned off his internet for his reaction. So, this time he was present during the latest slow cooker spare rib taste tests.

I recently read an article on a food blog, well more specifically a barbeque food blog and it was a big heated debate about what falling off the bone ribs meant.

Well there were some serious grillers insisting that you should never serve ribs “falling off the bone” as this meant that they were burnt and had lost their flavour.

Yet there were others that were saying the complete opposite and that it has its nicest flavour when it is slow cooked and is falling off the bone.

Personally, I am all for the latter, and couldn’t imagine my ribs any other way than falling off the bone and hate it when ribs are not slow cooked.

I remember having ribs at an outdoor barbeque restaurant and because they had just been cooked on the grill and they hadn’t been marinated or slow cooked they were so chewy and gave me toothache. I was not impressed and didn’t even finish the one I was eating.

It was tough and it felt like something cheap (which of course ribs are) but it didn’t have the lovely texture that slow cooked ribs have or a taste that I liked.

It is safe to say that if I am going to eat ribs they must be cooked slow in the slow cooker. This recipe is very much my favourite for a romantic night in for two.

Serve your Chinese Spare Ribs with some fresh bread and a movie and you have the perfect night in.

This is also perfect for a girl’s night in, a boy’s night in or a romantic night in for two. However, we prefer our Chinese spare ribs in either summer or winter. In winter with a Chinese bar, or in summer to keep us cool.

Also, if you’re a follower of Paleo you will be pleased to know that our Slow Cooker Chinese Pork Ribs are paleo friendly or suitable for those on a low carb diet.

Best of all of the ingredients to make my Slow Cooker Chinese Spare Ribs can be found in a typical pantry. Just make sure you add some pork ribs to your shopping list and you’re ready to go!

How To Cook Chinese Spare Ribs In The Slow Cooker?

I would describe my Chinese spare ribs as dump, mix and eat. You literally dump the marinade ingredients into the slow cooker, give them a mix, toss in the pork spare ribs and cook.

You can cook your Chinese spare ribs on high for 4 hours or on low for 8 hours. I prefer to cook my slow cooker grub on high and put it on early afternoon for our supper.

This recipe keeps your washing up pile to a minimum. The marinade is prepped inside the slow cooker so the only washing up you have is your slow cooker and your spoon. That is literally it.

Also because of the fat from the spare ribs, the slow cooker is very easy to wash up afterwards and doesn’t need an overnight soaking.

Or for a quick banquet my favourite summer supper is to have our Chinese spare ribs in one slow cooker and then our Slow Cooker Asian Pulled Pork in another.

Grab some tortilla wraps and add in some Air Fryer Potato Wedges and its heaven. Because both the 3 recipes are so easy to prep, it makes an ideal Friday or Saturday night meal. 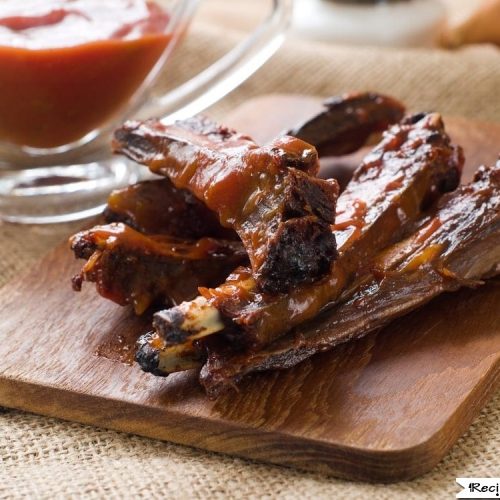 If you feel like your Chinese marinade is not sticky enough add more honey or if it tastes too sticky add in more BBQ sauce. If you want to keep it Paleo I recommend a Paleo friendly BBQ sauce. Or alternatively using your own homemade version.

Calories: 1482kcal | Carbohydrates: 23g | Protein: 79g | Fat: 118g | Saturated Fat: 38g | Cholesterol: 400mg | Sodium: 583mg | Potassium: 1313mg | Fiber: 1g | Sugar: 15g | Vitamin A: 233IU | Vitamin C: 3mg | Calcium: 168mg | Iron: 8mg
Nutrition InfoPlease Note: Nutrition values are our best estimate based on the software we use at Recipe This and are meant as a guide. If you rely on them for your diet, use your preferred nutrition calculator.
Are We Friends On Pinterest?If we are not and you use Pinterest then follow us @RecipeThisBlog for more delicious recipes.
Fancy A Video?Subscribe to the Recipe This YouTube Channel for full length recipe videos. Don’t forget to click the bell icon to be notified when we upload a new video. Subscribe Here!
Copyright Notice© RecipeThis.com. ALL content including photos are copyright protected. Sharing of our recipes is both encouraged and appreciated via the social share buttons. Copying and/or pasting full recipes to any social media channel or onto your own website is strictly prohibited.