Would you like to make instant pot scotch broth soup? By that I mean an authentic scotch broth that doesn’t require a scotch broth mix soak, that helps you learn more about the culture of scotch broth and best all, tastes amazing?

Then grab a seat and get comfy as I show you how to make scotch broth from scratch in the electric pressure cooker.

If you are wondering why today of all days, I am sharing with you a Scottish soup, then let me fill you in on the latest theme we are running on Recipe This.

We love themes on Recipe This, it allows us to get excited about a certain type of food and show you a way of cooking that we like to do.

It was the weekend before my 21st birthday when we got married and as we got married on the most popular Scottish day of the year, it felt like a great way to mark our wedding anniversary by dedicating some new recipes to the great food of Scotland.

If you want to learn more about the quirky food of Scotland and OMG how delicious it is, then we would love to have you follow the theme!

What Is Burns Night?

But before we crack on with the ins and outs of instant pot scotch broth, I am sure you are wondering what on earth burns night is, so let me fill you in.

Burns night is observed by Scottish people and many places throughout the United Kingdom also put on themed parties for burns night too.

So, this week we will be sharing with you our favourite Scottish food including the dreaded haggis and this delicious Instant Pot Scotch Broth.

What Is Scotch Broth?

Scotch broth is a filling Scottish soup, that is perfect for money saving thanks to how cheap it is to make one huge pot of scotch broth. The ingredients in a scotch broth vary from region to region but include scotch broth mix, some braising meat and vegetables.

My grandad used to cook it for me frequently, along with other similar filling soups and a pot would last for ages and feed many people.

Does Scotch Broth Have Meat In It?

One of the burning questions as far as scotch broth is concerned, is whether it has meat in it or not. This is because there are some modern versions that are vegetarian and vegan, and I can understand why it would be confusing.

In a nutshell YES. But like any soup or stew people often make diet or meat free versions.

In a typical scotch broth, it will be cooked with lamb. Though there are some versions that substitute this for braising beef.

Our version of scotch broth that we are cooking today in the instant pot pressure cooker, is made with lamb.

We had some spare diced lamb leftover from another recipe we were writing up for you and it was the perfect way to make an authentic scotch broth.

You can use all types of lamb. The most common is lamb neck. But you can also use lamb bones or braising lamb.

Our diced lamb is cut from the shoulder of a lamb that we bought when it was last in season.

Do You Have To Soak Scotch Broth Mix?

That is the amazing thing about using an instant pot, or other brand of electric pressure cooker.

YOU DON’T HAVE TO SOAK. Forget all those times when you want to soak beans, peas and lentils as thanks to the way the electric pressure cooker works that can be a thing of the past.

That same rule applies to scotch broth. You simple rinse and load into the instant pot, just like it is any other ingredient.

There are 7 main ingredients that go into instant pot scotch broth:

If you don’t already have an Instant Pot, then we have both the 6 quart Duo and the 8 quart duo in our kitchen as well as the Mealthy Multipot. Any type of electric pressure cooker will work well, but I recommend reducing the size of our recipe ingredients if using the mini as this is a full pot of scotch broth soup.

Actually, that is an understatement, if you think that soup loaded with lentils stretches a lot further, imagine my 6 quart pressure cooker is at the max line.

Then it thickens when left, so for leftovers and adding water in there will be enough to feed an army!

The most important ingredient is your scotch broth mix. This is the one we recommend that you buy.

Making instant pot scotch broth is EASY and it is a case of a quick sauté of ingredients and pouring in your vegetable stock.

The beauty of making scotch broth is that you can choose how you want it to turn out. Because the scotch broth mix allows it to naturally thicken you can keep it as it is or add more vegetable stock.

A thick scotch broth will be more like a classic stew, while adding in more vegetable stock will turn it into a thin soup.

For a good quality vegetable stock for your scotch broth we recommend Kettle and Fire. They have a fantastic product range and we love how healthy their stocks are for homemade soups and broths.

We have been asked a lot of questions about instant pot scotch broth and could go on forever answering them all.

Instead we have made a quick FAQ for you with the most common questions that we have received. If you have a question that is not mentioned below, leave a comment and we will add your question to the list!

What To Serve With Scotch Broth?

Here at Recipe This we love to make a big batch of soup in the instant pot pressure cooker.

Then we can have it for a few days for lunch or freeze it for another day. But I am sure you’re wondering what you should serve with your scotch broth.

Firstly, it is fantastic as it is and holding the warm bowl of scotch broth is perfect for those colder months. But here are a few more suggestions of what to have with it. 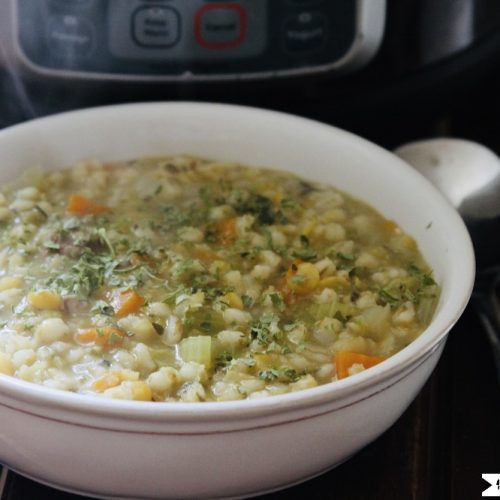 If you can’t get scotch broth mix at your local supermarket you can order it here online. Your vegetable stock is about personal choice. But you could also use your own or use a vegetable stock cube. This scotch broth makes a big batch. Because it thickens and adding in a little extra water, it would easily feed 12 people. It is ideal for saving money and eating for lunch for a few days or eating and then adding the leftovers to the freezer for another day.

Calories: 178kcal | Carbohydrates: 30g | Protein: 11g | Fat: 2g | Saturated Fat: 1g | Sodium: 688mg | Potassium: 490mg | Fiber: 14g | Sugar: 4g | Vitamin A: 3020IU | Vitamin C: 5mg | Calcium: 37mg | Iron: 3mg
Nutrition InfoPlease Note: Nutrition values are our best estimate based on the software we use at Recipe This and are meant as a guide. If you rely on them for your diet, use your preferred nutrition calculator.
Are We Friends On Pinterest?If we are not and you use Pinterest then follow us @RecipeThisBlog for more delicious recipes.
Fancy A Video?Subscribe to the Recipe This YouTube Channel for full length recipe videos. Don’t forget to click the bell icon to be notified when we upload a new video. Subscribe Here!
Copyright Notice© RecipeThis.com. ALL content including photos are copyright protected. Sharing of our recipes is both encouraged and appreciated via the social share buttons. Copying and/or pasting full recipes to any social media channel or onto your own website is strictly prohibited.