Air Fryer Giant Doughnut Cake. How to cook the most delicious giant doughnut cake in the air fryer. The easiest way ever to use your doughnut dough and perfect for birthday parties, potlucks, weddings, and bridal showers.

This giant doughnut cake must be the laziest way ever to make a cake in the air fryer and without a cake box mix in sight.

I have not used a cake mould on Recipe This for some time. The last time I used one was our giant custard cream cake recipe.

It was such a long time ago and when I got a few sent over this summer, the giant doughnut cake is what I was most excited to use.

But at the time there was a yeast shortage, and it had to go on the back burner for a while.

Well my kitchen is now loaded up with dried yeast and with doughnut supplies and a giant doughnut cake mould I am ready to show you how easy it is to make a doughnut cake in the air fryer.

What Is A Cake Doughnut?

This makes it much quicker than making traditional doughnuts and is a lazy way to make a quick cake.

You would then glaze your cake doughnut like you would with individual doughnuts.

If you are wondering what a doughnut cake matches compared to regular doughnuts, then think 8 in 1.

My doughnut dough that I can normally get 8 doughnuts out of, instead makes one giant one.

When you make a doughnut cake it will be the same taste and texture as a regular doughnut just in a bigger form.

However, a doughnut is essentially a bread dough that has been modified for doughnuts, whilst a cake mix is much wetter and tastes somewhat different.

The same brand of silicone doughnut mould that we used when we made our giant custard cream cake.

Because the doughnut cake mould is made from silicone it is non-stick and you don’t have to flour the mould first.

I was also pleased that it fitted perfectly in the air fryer and I could grab the just made doughnut dough and load it straight in.

The doughnut cake mix, is the laziest part of the recipe. We loaded the ingredients for the doughnut dough into the bread maker and let the bread machine do the hard work!

You can then grab the JUST made dough from the bread machine and add it to the silicone mould.

How To Make Doughnut Cake?

The quick version of cooking a giant doughnut cake in the air fryer goes as follows:

There is a little more to it than that, but those are the simple basics!

I prefer turning my giant doughnut cake into a jam cake. I was born in England and grew up eating Victoria sandwich sponge cakes. I always loved that amazing jam and cream filling.

Because the doughnut cake is so big, it feels like it is lacking a cake filling if made without.

To transform yours into a jam doughnut cake, slice in half and load with strawberry jam and cream. Then glaze with icing as usual.

I love to have my giant doughnut cake glazed with pink icing and plenty of sprinkles. Or as us Brits would call it 100’s and 1000’s. 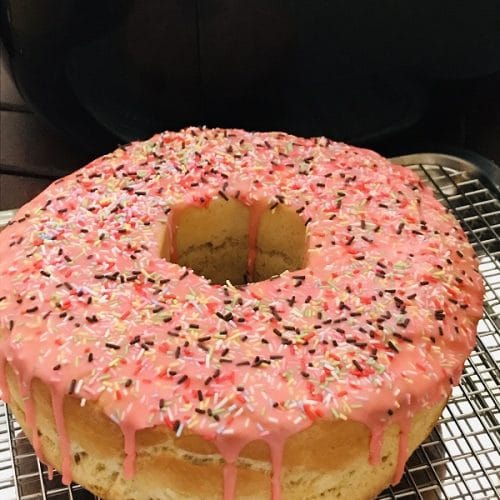 Calories: 350kcal | Carbohydrates: 61g | Protein: 4g | Fat: 10g | Saturated Fat: 2g | Cholesterol: 1mg | Sodium: 592mg | Potassium: 147mg | Fiber: 1g | Sugar: 32g | Vitamin A: 9IU | Calcium: 37mg | Iron: 2mg
Nutrition InfoPlease Note: Nutrition values are our best estimate based on the software we use at Recipe This and are meant as a guide. If you rely on them for your diet, use your preferred nutrition calculator.
Did You Know We Are Making An Air Fryer Cookbook? It is going to be full to bursting with the easiest ever air fryer recipes, beautiful photos, metric & imperial measurements and recipes you would want to cook everyday in your air fryer. Click here to pre-order.
Are We Friends On Pinterest?If we are not and you use Pinterest then follow us @RecipeThisBlog for more delicious recipes.
Fancy A Video?Subscribe to the Recipe This YouTube Channel for full length recipe videos. Don’t forget to click the bell icon to be notified when we upload a new video. Subscribe Here!
Copyright Notice© RecipeThis.com. ALL content including photos are copyright protected. Sharing of our recipes is both encouraged and appreciated via the social share buttons. Copying and/or pasting full recipes to any social media channel or onto your own website is strictly prohibited.