Today is the turn to finish our tikka masala marinade and make Bombay potatoes that are cooked slow in the slow cooker.

I like my Slimming World Bombay Potatoes the most. That is because we often are lacking when it comes to ideas of what to serve our curry with (well apart from rice) and Bombay potatoes make a welcome change.

But the best reason of all, is that I am all for saving money and I am using the last of my chicken tikka marinade to make these yummy Bombay potatoes.

Don’t you just hate it when you make a marinade and then you have loads spare and it ends up going in the bin as you just don’t have a real use for it?

Well this is the time that the spare marinade can be used up to make one of the most delicious slow cooker recipes ever!

These Syn Free Slimming World Bombay Potatoes are laughable. That is because it is literally dump and go.

Potatoes are thrown into the slow cooker, you add the spare tikka masala marinade on top, seal it and cook on low.

There is no washing up too. That is because to enhance the flavour we cook our Slimming World Bombay Potatoes inside a silver foil packet, keeping all the mess in the silver foil and saving you the job of scrubbing out your slow cooker.

Imagine having all these lovely Bombay potatoes to eat and having no washing up, well apart from the fork you are eating them from?

Isn’t that just the ideal recipe for the slow cooker?

To make the tikka masala marinade you add the following to a mixing bowl:

Then load it over your potatoes and then they are one step closer to becoming your own Slimming World Bombay Potatoes.

Or if you want to make enough tikka masala marinade for Bombay potatoes then ¼ this marinade. So instead of 2 teaspoons of cumin it becomes half a teaspoon and so on. 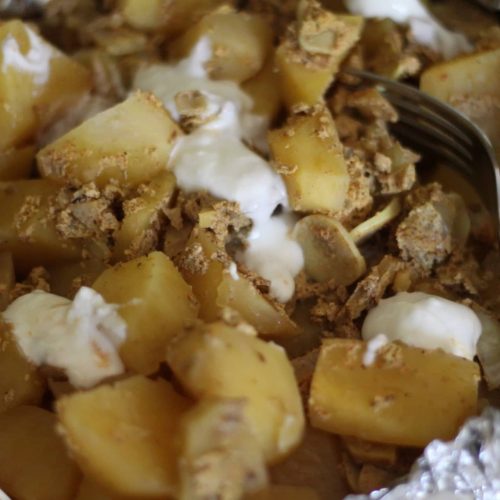 For chopping your potatoes imagine the size of roast potatoes. I love my Bombay potatoes cooking in one slow cooker while my Slimming World Chicken Tikka Masala is in the other. YES I really do have 2 slow cookers! If you like more heat in your Bombay potatoes, then double the chilli from a pinch to ¾ tsp.

Calories: 267kcal | Carbohydrates: 47g | Protein: 16g | Fat: 2g | Saturated Fat: 1g | Cholesterol: 4mg | Sodium: 66mg | Potassium: 1421mg | Fiber: 9g | Sugar: 3g | Vitamin A: 625IU | Vitamin C: 38.5mg | Calcium: 203mg | Iron: 11.7mg
Nutrition InfoPlease Note: Nutrition values are our best estimate based on the software we use at Recipe This and are meant as a guide. If you rely on them for your diet, use your preferred nutrition calculator.
Are We Friends On Pinterest?If we are not and you use Pinterest then follow us @RecipeThisBlog for more delicious recipes.
Fancy A Video?Subscribe to the Recipe This YouTube Channel for full length recipe videos. Don’t forget to click the bell icon to be notified when we upload a new video. Subscribe Here!
Copyright Notice© RecipeThis.com. ALL content including photos are copyright protected. Sharing of our recipes is both encouraged and appreciated via the social share buttons. Copying and/or pasting full recipes to any social media channel or onto your own website is strictly prohibited.
Recipe This