If spinach is your thing, then our soup maker spinach soup is worth trying as your next soup maker taste test. I have been addicted to spinach since I was a child.

It was my aunt that first introduced me to the beautiful taste of spinach. I can’t remember exactly when she got me hooked, but I do remember her making me buttered spinach in the microwave and it was just so delicious.

She has that amazing ability to quickly cook up delicious things in a hurry and feed a crowd. I remember going to stay with her, arriving late at night and I couldn’t believe just how quick she had food out to feed the 5 of us.

Though back to that yummy spinach…..

I am guilty as an adult, that I don’t buy it as much as I would like.

That is because I am a frugal type of cook and hate the fact that those big bags of spinach turn into a small pathetic looking pile of wilted heaven.

I want to eat huge amounts of spinach as it tastes so good and I just wish it didn’t disappear into hardly anything.

Though occasionally, I pay the price and grab a bag and enjoy a spinach binge. Or our wonderful next-door neighbour gives me a load of spinach from her garden.

Today’s spinach binge as you know is to make a delicious homemade spinach soup in the soup maker. If you have some spare spinach, then it is ideal for adding a new flavour to your soup maker.

Though we all know soup maker spinach soup as being loaded with spinach, it always contains potatoes. This is because the starchy potato gives your spinach soup that creamy, comfort food texture.

Often when you see pictures of spinach soup (like ours for example) you will see cubes of potatoes. The potatoes really make the spinach soup come to life and makes it binge worthy.

You can of course choose what other ingredients to add in beyond the spinach and potatoes. I love my soup maker spinach soup to have lots of diced onions and garlic works well too.

Though I didn’t intend on making my soup maker spinach soup slimming world friendly, it is automatically thanks to its wholesome ingredients.

There is no oil, no cream and our Slimming World spinach soup just contains vegetables, potatoes and seasonings, this of course makes it SYN FREE. It is NOT a speed soup though because of the potatoes.

Or you can make your spinach soup in a few batches until you have enough. You could also convert our spinach soup recipe to the Instant Pot Pressure Cooker, which is what I do if I am making a much bigger portion size.

Can You Freeze Your Spinach Soup?

Absolutely! As I type this up for you now, ready for you to try out later, I already have my leftover soup maker spinach soup, sat frozen in our huge chest freezer.

I love to freeze my leftover soup because, not only is it perfect for next time I want soup, but it makes a delicious creamy base for a pasta sauce. Right now, in my freezer you will find plenty of soups and sauces and broths and stocks from previous times when I cooked too much.

To freeze your spinach soup, simply allow it to completely cool, place into freezer containers and label up. Then get your freezer containers out of the freezer the night before you plan to eat your soup and then reheat once thawed.

How To Make Spinach Soup In The Soup Maker?

I like to split up my spinach soup into 2 sessions. That is because fresh spinach before it is wilted takes up way too much room in the soup maker and you haven’t got the space for everything. You can also take this wilted spinach and serve it as a side dish and not just use it in our spinach soup recipe.

You can download all our recipes including the spinach soup (which will be in the autumn edition) in an easy to digest PDF. 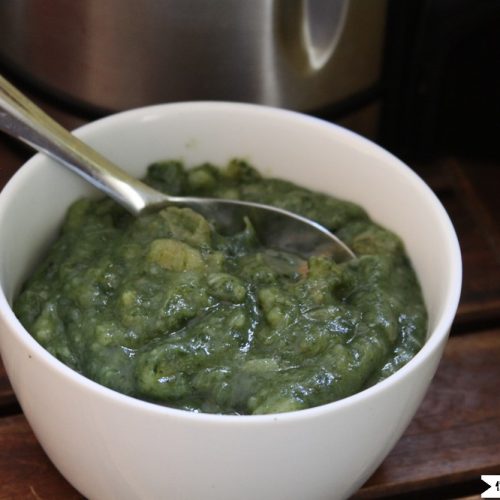 By semi blend, I mean blend it until about 75% of the soup is blended and then stir. This will give you a slightly chunky soup and gives you a better spinach soup texture. If you have a soup maker that doesn’t have a blender option, then you can use a hand blender over your soup maker instead. The fresh spinach soaks up the water well, so you need quite a bit of liquid in this spinach soup. You don’t have to peel the potatoes as potatoes in their skins taste so delicious and carry extra vitamins. I just thinly cube my potatoes without peeling.

Calories: 100kcal | Carbohydrates: 21g | Protein: 5g | Fat: 1g | Saturated Fat: 1g | Sodium: 64mg | Potassium: 871mg | Fiber: 5g | Sugar: 2g | Vitamin A: 6152IU | Vitamin C: 37mg | Calcium: 119mg | Iron: 6mg
Nutrition InfoPlease Note: Nutrition values are our best estimate based on the software we use at Recipe This and are meant as a guide. If you rely on them for your diet, use your preferred nutrition calculator.
Are We Friends On Pinterest?If we are not and you use Pinterest then follow us @RecipeThisBlog for more delicious recipes.
Fancy A Video?Subscribe to the Recipe This YouTube Channel for full length recipe videos. Don’t forget to click the bell icon to be notified when we upload a new video. Subscribe Here!
Copyright Notice© RecipeThis.com. ALL content including photos are copyright protected. Sharing of our recipes is both encouraged and appreciated via the social share buttons. Copying and/or pasting full recipes to any social media channel or onto your own website is strictly prohibited.