Lord Woolton Pie. The classic World War 2 cheap vegetable pie with a delicious shortcrust pastry crust and loaded with lots of seasonal root vegetables. One of the best rationing meals during World War 2.

I have been eating my own version of Lord Woolton Pie for more than 20 years, without even knowing that such a thing existed during the second world war.

What I truly love to eat is root vegetables in a homemade cheese sauce. It was my meal of choice when I was a vegetarian and is often referred to among the Brits as Veggie Bake.

It was always high on the calories thanks to the naughty homemade cheese sauce and during my vegetarian days I would want to eat it every day if I could!

When I found out what a Lord Woolton Pie really was, it was on the top of my list of must try World War 2 recipes that I was going to do during my rationing week.

There are two main versions of Lord Woolton Pie:

What I am sharing with you today is version 2 of the Lord Woolton Pie just with one major difference.

Instead of oats that was often used to thicken the sauce we are using a potato-based sauce.

This is because as we are following World War 2 rations, we don’t have enough left for oats. Which was also a problem for many people during the war.

The Lord Woolton Pie usually involved a mixture of root vegetables that many people were growing in their dig for victory allotments.

But it was often a case of what was in season and what you had available to you. Just as long as they were hard enough and wouldn’t go too soft in the cooking process.

Based on what we had in we are making our Lord Woolton Pie with:

Parsnips are not very easy to locate in Portugal and are often over priced and cauliflower is out of season now. Like with during the war we are sticking to seasonal produce to make our Lord Woolton Pie.

Apart from the vegetables that we are using in our pie our Lord Woolton Pie will also include butter and flour to make the pie crust. 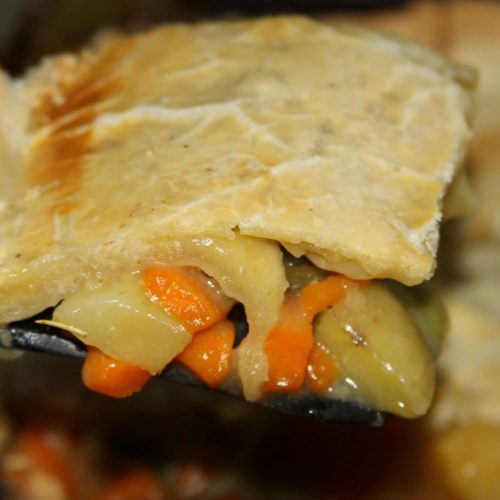 For egg wash you never need a full egg. We used half for this and half for another pie we were making. You can mix and match any root vegetables that you have. Parsnips and turnips are other delicious options. Avoid watery vegetables like courgette and pumpkin as it will ruin the pie.

Calories: 349kcal | Carbohydrates: 72g | Protein: 14g | Fat: 2g | Saturated Fat: 0g | Cholesterol: 42mg | Sodium: 144mg | Potassium: 2281mg | Fiber: 15g | Sugar: 11g | Vitamin A: 16135IU | Vitamin C: 79mg | Calcium: 246mg | Iron: 14.5mg
Nutrition InfoPlease Note: Nutrition values are our best estimate based on the software we use at Recipe This and are meant as a guide. If you rely on them for your diet, use your preferred nutrition calculator.
Are We Friends On Pinterest?If we are not and you use Pinterest then follow us @RecipeThisBlog for more delicious recipes.
Fancy A Video?Subscribe to the Recipe This YouTube Channel for full length recipe videos. Don’t forget to click the bell icon to be notified when we upload a new video. Subscribe Here!
Copyright Notice© RecipeThis.com. ALL content including photos are copyright protected. Sharing of our recipes is both encouraged and appreciated via the social share buttons. Copying and/or pasting full recipes to any social media channel or onto your own website is strictly prohibited.